Germany′s coronavirus challenges in the ′second wave′ | Germany | News and in-depth reporting from Berlin and beyond | DW | 24.08.2020

Chancellor Merkel is to dicuss the pandemic with all of Germany's 16 state premiers this week for the first time in 10 weeks. Germany may ditch its localized response and approve national measures as cases rise again. 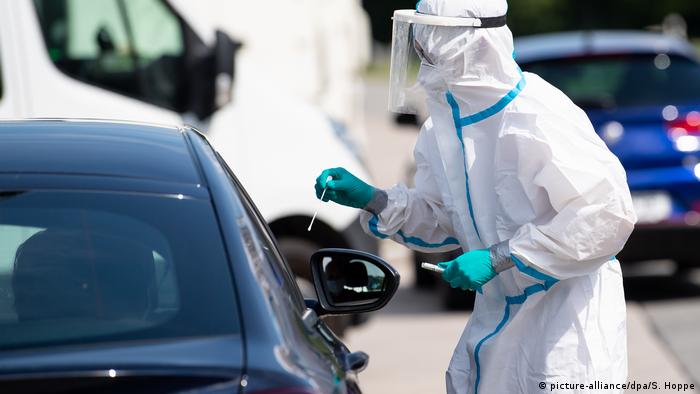 The temperature might finally be cooling off in Germany, but there is no respite when it comes to new COVID-19 cases.

Whether we are already in a "second wave" or whether the first one has in fact never ended, is still being debated. But the numbers are certainly clear: Saturday saw the highest number of new cases since the end of April. Until now, Germany's coronavirus policymakers have sworn by the country's federal system, but with no real hot spot to speak of, Germany's localized strategy could be about to take a U-turn.

Chancellor Angela Merkel is due to convene via video call with the state premiers of Germany's 16 states on Thursday — the first time since June 17.

Nationwide regulations on face masks will be a key issue, including a proposal to introduce compulsory face coverings in the workplace. "That could definitely be a step that also becomes mandatory nationwide, at least if it could prevent entire industries from being closed," Annegret Kramp-Karrenbauer, leader of Merkel's conservative CDU party, told weekly newspaper Welt am Sonntag. 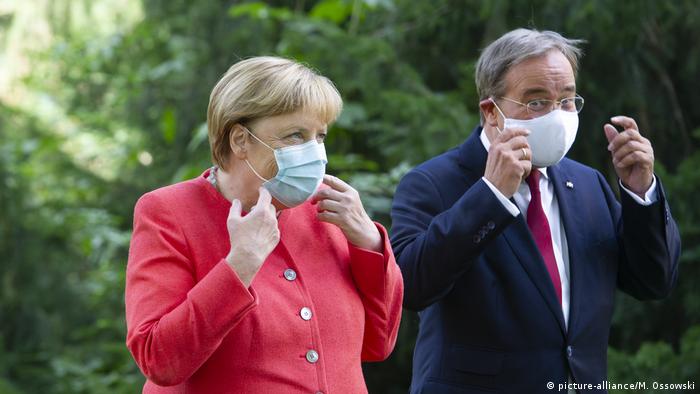 Read more: WHO hopes for end to pandemic within two years

If compulsory masks in classrooms prevent school closures, a similar rule could also be applied to schools across the board, Kramp-Karrenbauer said. While masks have become standard practice on most school premises, the western state of North-Rhine Westphalia (NRW) is so far the only state to require them during lessons for secondary school children.

The biggest criticism regarding masks, however, remains how the rules are implemented. Penalties for mask shirkers vary enormously from state to state: in the German capital, fines can be up to €500, while the penalty in Rhineland-Palatinate in western Germany is just €10. A lack of personnel means checks are also more limited in some areas than others.

NRW state, however, saw the launch of the country's first statewide operation to control compliance on transport on Monday, involving public order offices, federal police, railway staff and local transport companies. German railway company Deutsche Bahn has also announced that more security guards will be deployed at train stations — especially after 11 p.m. — to ensure that masks are being worn.

Implementing hygiene rules in restaurants has become equally as difficult as controlling rules on masks. While some restaurants are strictly keeping tables at least 1.5 meters (4.9 feet) apart, others have already given up on collecting contact details from guests — with many reporting visits from the likes of Donald Duck and Fred Flintstone.

If there's one way Germany usually makes it through the autumn and winter months, it's through popular events like Oktoberfest, the Christmas markets or celebrating the Carnival season kick-off, all of which will also be up for debate on Thursday.

The last video call between Merkel and state premiers concluded that events where contact tracing and hygiene regulations couldn't be implemented would be called off until at least the end of October — leaving the Oktoberfest tents firmly packed away for the first time since World War II.

Carnival could now be the next festival to face the axe. Dubbed Germany's "fifth season," celebrations would usually kick off on November 11 — a day filled with costumes, dancing, parades and beer. According to regional paper Rheinische Post, Health Minister Jens Spahn — and childhood Carnival prince no less — said he "simply can't imagine Carnival this winter, in the middle of the pandemic. It's bitter, but that's how it is."

While a YouGov poll published on Monday found that two thirds of people surveyed share Spahn's opinion, the German Carnival Association (BDK) rejected a blanket ban and warned of "disastrous" economic effects — especially for Carnival heartlands like Cologne and Düsseldorf. From costumes to hotel reservations, revellers spend an estimated €2 billion ($2.4 billion) during Germany's Carnival season, which officially runs until Lent in early spring.

In a normal year, just days after Carnival kicks off, the smell of traditional glühwein, or mulled wine, would also be descending on town squares as Christmas markets open. But already in August cities are planning for the worst, with measures including one-way systems and mandatory masks already being touted.

Smaller events remain equally difficult to control. "At the moment we can see in Berlin that leisure activities and private celebrations are driving up the infection rate," Berlin Health Minister Dilek Kalayci told German press agency dpa on Monday, prompting her call for nationwide regulations on private celebrations.

But other states have already rejected a one-size-fits-all approach. "Why should I restrict the population of my state in the north in the same way that might be necessary in Bavaria?" Manuela Schwesig, state premier of Mecklenburg-Western Pomerania, which has seen far fewer cases than some other states, demanded last week.

Since state premiers last convened, testing has also increased significantly from around 570,000 per week a month ago to more than 875,000 in the last week. The increase is largely due to the number of travellers being tested on arrival.

But in the two weeks since tests became obligatory for people traveling from high-risk areas — voluntary tests for other arrivals have also been available since late July — the well-intentioned measure has left many labs overwhelmed.

And this is only the beginning. The amount of necessary testing in Germany looks set to only rise as autumn sets in, with negative test results likely to be required for all manner of personnel and institutions, from teaching staff to football fans.

According to dpa, a revised plan, presented by Health Minister Spahn to his state-level counterparts on Monday, could see an end to mandatory testing for travelers from high-risk areas as soon as the last German state returns to school in mid-September.

Instead, high-risk arrivals could see the return of a mandatory quarantine which could "only be ended by a negative result from a test taken no earlier than five days after arrival in Germany."

In the meantime, calls are also growing for the use of RT-LAMB rapid tests which can provide a result within 24 hours. The tests, which are already in use in the UK, are now just as precise as the standard PCR tests currently used in Germany, and cost less than €10.

Merkel's meeting with state premiers on Thursday could determine whether Germany can ride the so-called second wave as well as the first — and could leave the country's federal system functioning or floundering.