With a test concert by Tim Bendzko, a German university has undertaken an ambitious coronavirus study to determine the risk related to large-scale stadium events.

"We felt that a study on how cultural events could somehow possibly keep going was a cool idea and that's why we registered," said Kira and Felix Stütz.

Spending an entire day in a huge crowd in an arena might not seem like the best plan at the moment, especially considering that the number of new coronavirus cases in Germany has surged up to more than 2,000 within 24 hours — a high that had not been seen since the end of April, when strict restrictions still applied throughout the country.

Yet that is exactly what happened on Saturday in Leipzig, as volunteers lined up early on a rainy morning to take part in a study called RESTART-19, which had participants attend a series of concert simulations, and having them follow three different scenarios with varying admission and seating plans.

The ambitious event, organized by the University Medical Center of Halle, was held to collect data on crowd behavior in and around the arena to better assess the risk associated with holding such large events in the future, as Michael Gekle, dean of the medical faculty at the Halle University, told DW. He hopes that the data will "contribute to national decisions as to whether an event should take place or not, thanks to reliable predictions as to the risk of additional infections related to such an event." 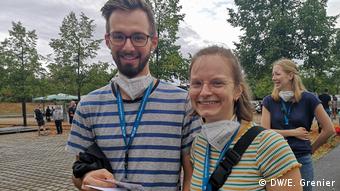 Safer than taking the train

For Kira and Felix, it felt "safer than travelling by train through Germany, for instance." In fact, the measures applied for the selection of the project's participants were way stricter than in everyday contexts. Every participant had to test for COVID-19 48 hours ahead of the event and could only participate with a negative result; people with symptoms or recently returning from a high-risk country were not allowed to take part.

On the morning of the study, the participants' temperature was taken before they were handed an FFP2 mask, which blocks respiratory droplets through which the disease could be transmitted, as well as a contact tracer to track their movements, and a bottle of disinfectant mixed with a fluorescent marking spray to determine the surfaces they'd touch throughout the day. 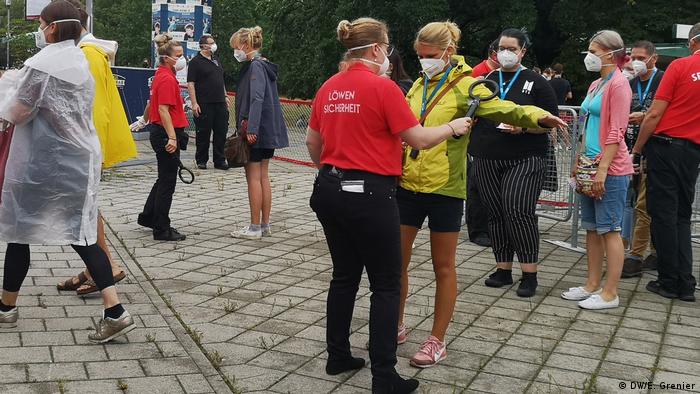 It was already part of an arena concert routine before the virus: Security scans were held during the study event too

A first step in an unresearched field

Even though there was only a third of the 4,200 volunteers the organizers had initially hoped to get together, study director Stefan Moritz said that he was "very satisfied with the quality of the data they had collected" throughout the day from the 1,500 participants' tracking devices. "It's a database with which we will be able to work very well."

It will take several weeks to develop results based on this data; findings are to be made public in September, added Moritz.

This is the first study of its kind, according to professor Gekle. Before the pandemic, this was not the type of question researchers were focusing on, and allowing such a large-scale event to take place for research purposes was not an option earlier on in the pandemic, when the ways the virus could spread were still unknown.

Meanwhile, the organizers of the Leipzig study have been contacted by three other universities from Australia, Belgium and Denmark that are also undertaking similar projects; this will help strengthen their own research, said Moritz. 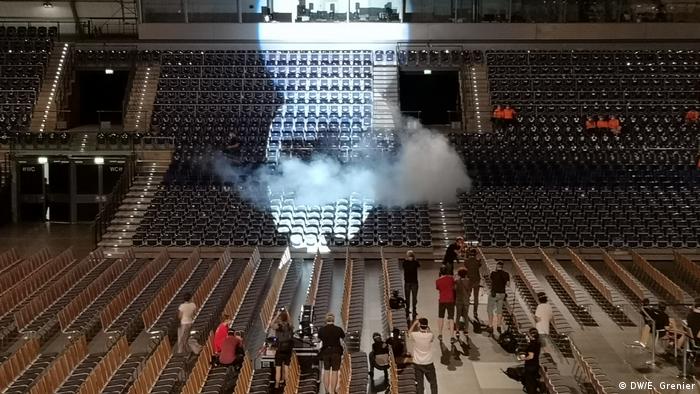 Ahead of the study, which cost nearly €1 million ($1.2 million), critics were quick to dismiss its potential findings, since it does not reflect the real conditions of normal concerts, with people drinking alcohol and singing along without wearing a high-filter mask. "That's the problem of every study, that it's not the 'real world,'" said Michael Gekle. They would indeed have preferred to allow people to drink indoors, he added, but health authorities wouldn't let them go that far. "So we faced the option of either remaining without data or having data that doesn't completely reflect the normal context — but it's still halfway there. And halfway is still better than nothing at all."

"We're looking forward to the study's findings, even if we know it will not solve everything," said Matthias Kölmel, managing director of the Leipzig Arena. He pointed out that the events industry is the sixth largest in Germany, employing around 1.5 million people and generating direct revenues of €130 billion. "Stadiums were the first to close during the outbreak and will probably be among the last businesses to reopen," he added. 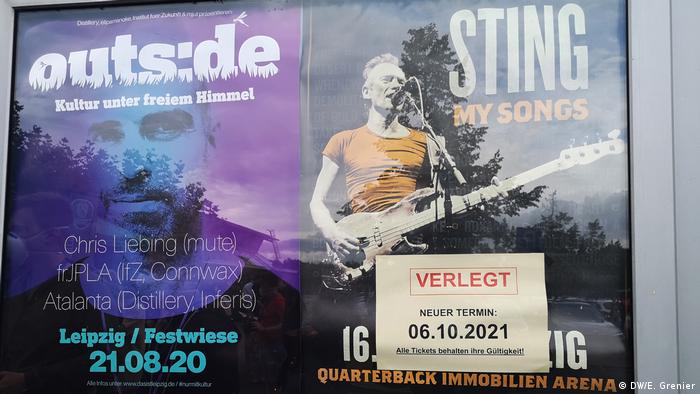 A Sting concert was postponed to October 2021, but no one knows if the situation will have improved by then

As the star performer throughout the different concert simulations, German singerTim Bendzko said he was glad to contribute to hopefully relaunching large events soon. "We really enjoyed it [performing]. At first I thought the masks would make it very sterile, but it felt surprisingly good," he said.

And, he added, compared to the concerts he's given at drive-in cinemas since arenas closed down, he could definitely read more emotion in the masked concertgoers' eyes than in their cars' blinking lights.

'We are not afraid': Young partygoers defy coronavirus rules for Berlin nightlife

The rise of coronavirus infections in Germany is said to be partly driven by people celebrating too much and not following social distancing rules. What’s it like in Berlin? DW’s Thomas Sparrow went to find out.

Tim Bendzko says it's time to grow up

Berlin singer-songwriter Tim Bendzko has sold about a million records in just five years. Now he's come out with his third studio album, "Immer noch Mensch." Bendzko produced the album all by himself -- at home.