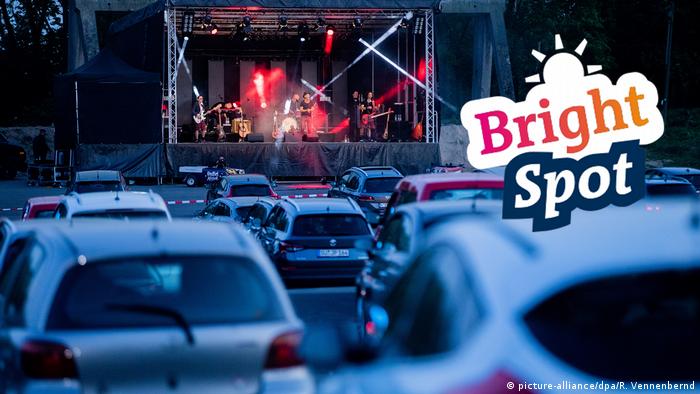 Red taillights glow ahead of me as far as I can see as I slowly inched my way down a nondescript road in Cologne on a Saturday evening, stars twinkling from a clear blue sky, not a cloud in sight. No one knows how long movie theaters will be forced to stay closed right now, so if you want to see a movie on the big screen, you have to hop in your car and head to a drive-in cinema.

I was on my way to the one in the Porz district of Cologne. Every performance is sold out, even during the week. Admission is an hour before the film starts. Almost 30 drive-in movie theaters have opened since the beginning of the coronavirus pandemic in Germany, bringing the total to about 50. Every single one is packed all the time.

I had never before been to a drive-in movie theater, it was something I used to turn up my nose at.

There's something old-fashioned about the parking lot and the screen that reminds me of car-crazy America in the 1950s and '60s; images of teenage couples kissing and cuddling come to mind. Back then, there were about 4,000 drive-in movie theaters in the US, and many regular cinemas in the inner cities had to close due to the competition in the suburbs. 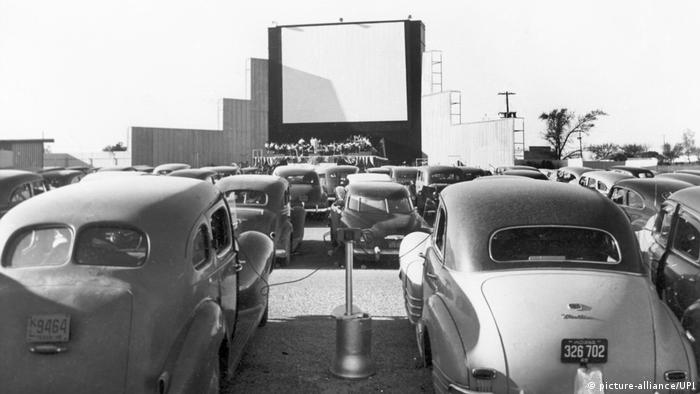 'Typically American': a drive-in theater in the 1950s

So there I was. At least a dozen ushers wearing high visibility vests and face masks directed me to my designated spot on a kind of XXL parking lot. The screen set up at the edge of the space is a concrete construction easily 40 meters wide.

"It's best to get here early enough. Visitors are not allowed to choose their spot. We start in the middle and then go down the rows, from the third to the second and then to the first row," said usher Laura Siebel, her voice muffled by the face mask. "When the first rows are full, we move on to the back."

Siebel used to work in the snack bar, but that closed in the wake of the coronavirus shutdowns. Fear of the virus has changed the rules even at the drive-in.

Even parked cars need to keep a distance

"The windows are best kept closed," said Thorsten Schiers, who runs the Cologne cinema. "Leave the car only to go to the bathroom."

He added that the distance between the cars — they are parked on barely visible ramps that slightly raise the front wheels — is at least two meters. Schiers told me he is pleased that he can make up for the financial losses caused by cancelled flea markets and weekly markets thanks to the increased demand for films. "We reopened on April 3 and since then most shows have sold out." The venue shows two movies a night, at 9:15 p.m. and 00:15 a.m.

I was surrounded by families, couples and singles watching a rather mediocre German comedy. All in all, there were 260 cars. "We can't have more because of the distance rules," said Schiers, who wore a DIY face mask.

Sunday mass at the drive-in during coronavirus outbreak

A few minutes before the film was scheduled to begin, I turned on the radio. The drive-in movie theater's sound track has its own frequency, which is announced on the giant screen. Then the film started. With everyone sitting in their own cars, it wasn't much of a social event. But then again, there was no one to complain when I popped my non-alcoholic beer and noisily opened a bag of potato chips and munched on the contents.

The culture scene has also discovered drive-in movie theaters as the place to be. Recently, the popular Cologne band Brings played a concert at the Porz drive-in. The atmosphere was special, said Schiers, who was clearly proud of having hosted the event.

Fans who usually dance and cheer sat cooped up in their cars. "Nobody thought that was possible," Schiers said, adding that the audience honked horns and flashed headlights to applaud — a concert of "goose bump moments from start to finish." 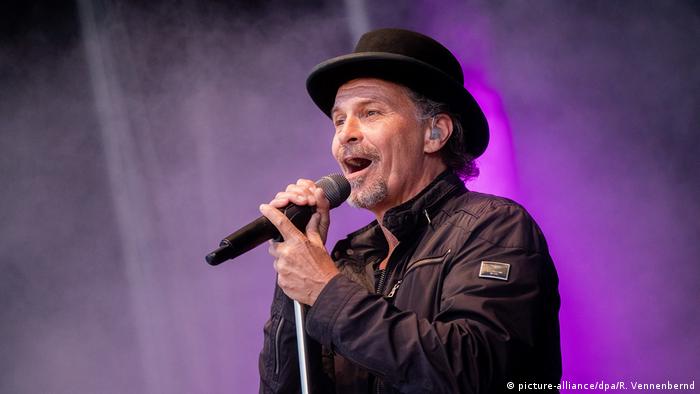 Heiko Desch, a theater manager, coordinates inquiries for the five drive-in cinemas. "We are being overrun," he told DW. From poetry slams and conferences to lectures and church services, "everyone wants to use drive-in movie theaters."

Be sure to check your car battery

Compared to the previous year, the turnover of some of the venues has quadrupled, Desch said, adding however that concession stands are closed and with now two shows a day, personnel costs are up. The municipalities have to decide whether to allow more concerts to take place. "At the Brings concert in Cologne, neighbors complained about noise," Desch said.

Ten minutes into the film, the battery power fizzled and the film fell silent. I had thought to pack a blanket, but I never considered the battery. I had no choice but to start the engine and watch the film with the motor running. With a guilty conscience, I grabbed another handful of chips from the bag.

Not a gala, but a TV show without an audience: the Lolas, Germany's top film award, will be rewarded in 2020 despite the pandemic. A look at the favorites — and at an insecure industry. (20.04.2020)

The film about a troubled child, called "System Crasher" in English, has swept Germany's equivalent of the Oscars. It's 11-year-old lead won best actress. (25.04.2020)