German researchers have called for 4,000 volunteers to attend a pop music concert and help them assess the risks of coronavirus transmission. All participants would need to test negative for the virus before taking part. 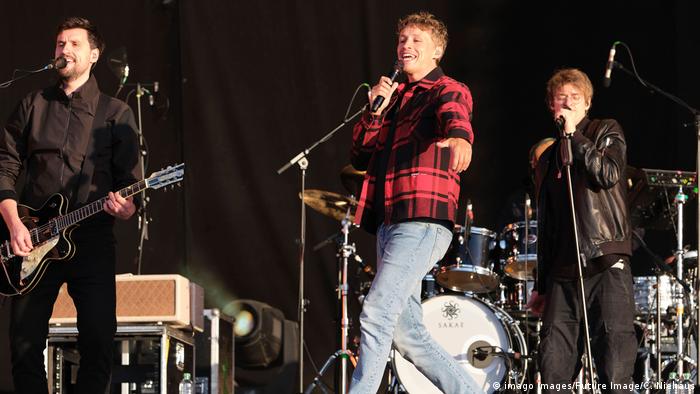 Pop singer Tim Bendzko (center) would be performing at the event

As Germany mulls return of sports fans to the stands, a team of medical researchers is organizing an experiment that would see thousands of volunteers attend a pop music concert.

On their website, the team warned of the dangers brought about by the coronavirus pandemic.

"Difficult decisions must be made to avert these dangers," the scientists from the Halle teaching hospital wrote.

At the same time, they warned that the ongoing ban on large crowds poses "an existential threat for many athletes and artists, who depend on their audience for income."

The scientists hope to recruit 4,000 participants who would gather in the Leipzig arena on August 22. The volunteers, aged 18 to 50, would have to have previously been tested for the coronavirus and only those who test negative would be allowed to take part. The entertainment would be provided by pop singer Tim Bendzko to bring "the behavior of the audience as close as possible to reality," the organizers said.

The researchers would provide FFP2 filter masks to reduce infection risks. They would also be giving out a fluorescent disinfectant which — in addition to providing another layer of protection — would let the scientists track surfaces most often touched by audience members. Most importantly, the volunteers would be given a device which would track their movements and their distance to the other attendees.

"The biggest challenge, I think, would be the evaluation of data," project leader Stefan Moritz was quoted as saying by the German DPA news agency.

"Because we would need to measure contacts to all other participants within a 30-meter radius every five seconds throughout an entire day," he added.

The organizers plan to run the audience through three possible scenarios, starting with the one where nobody is distancing, then moving on to one with stricter hygiene measures and slower entry to the participants, and finishing with the volunteers sitting in the stands at a recommended social distance of 1.5 meters (6 feet). The final scenario would require only 2,000 volunteers to take part at the Leipzig venue, which has a capacity of some 12,000.

Researchers hope the experiment will help them come up with a mathematical model that could be used to avert outbreaks stemming from large venues.

The project should help "identify possible frameworks under which artists and athletes could once again play and perform after September 30," the researchers said on their website.