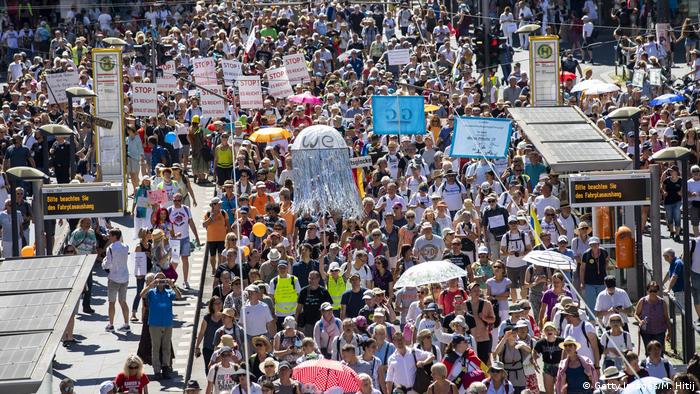 It was a curious sight to behold. On August 1, a motley crowd of protesters from across Germany — ranging from far-right extremists and conspiracy theorists to supporters of the anti-vaccination movement and followers of esotericism — flocked to Berlin to vent their anger at government-imposed restrictions to curb the spread of coronavirus. In front of the city's iconic Brandenburg Gate, people shouted "we're the second wave" and "resistance." According to the police, some 20,000 protesters converged on the capital that Saturday.

The event had been organized by a controversial Stuttgart-based organization known to have staged the country's largest anti-coronavirus lockdown protests so far. That day's theme — "Tag der Freiheit," or "Day of Freedom" — was eerily reminiscent of the title of a 1935 Nazi propaganda film by Leni Riefenstahl.

Shared loathing of the government

Protester were seen waving Germany's Imperial War Flag, a favorite with far-right extremists and members of the Reichsbürger, or Reich Citizens' Movement, both of whom reject Germany's present-day political order. Yet among the crowd were also people waving peace and rainbow flags, as well those with placards reading "Jesus Lives!"

The demonstration also included families, many of whom voiced a vague displeasure with coronavirus-related safety measures adopted by the government, albeit without subscribing to any of the conspiracy theories espoused by others attending the march.

While the protesters evidently hailed from all walks of life and did not share a single worldview, they were united in their loathing of the government's approach to containing COVID-19. Many are also deeply suspicious of the media. A DW journalist covering the event was repeatedly insulted, bullied and urged to remove her face mask.

It was clear from some of the protesters' placards that they do not believe the coronavirus exists. Instead, many are convinced the virus is a pretext fabricated by the government to turn Germany into a dictatorship.

Some of the protesters were seen wearing Nazi-era Stars of David on their chests that read "not vaccinated." They were drawing a parallel to Jews in Nazi Germany, casting themselves as a persecuted people living under a dictatorship that imposes "vaccination fascism." Some were seen and heard lambasting Chancellor Angela Merkel, high-profile German virologist Christian Drosten and German Health Minister Jens Spahn as "appeasement politicians."

Many marchers held signs reading "don't give Gates a chance," a riff on a slogan popularized years ago in the fight against AIDS but tweaked to target Microsoft founder Bill Gates. These protesters are convinced that the billionaire tech entrepreneur is out to vaccinate people against their will and plant microchips in their bodies. 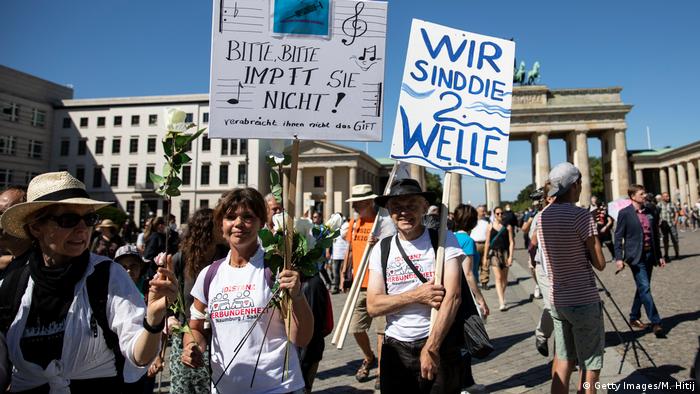 Who is promoting these theories?

Anselm Lenz, a former journalist, organized Germany's first protest march against coronavirus lockdown measures. Lenz, who is associated with the country's political left, claimed the German state had allied itself with pharmaceutical and tech companies to abolish democracy.

A mere 40 people showed up to his protest at Berlin's Rosa Luxemburg square. Just four weeks later, a similar gathering drew a crowd of 1,000 people, with some railing against Bill Gates and what they called a "vaccination dictatorship."

Former radio journalist Ken Jebsen was one of the first high-profile figures to join the movement. Jebsen, who was fired from his job in 2011 for anti-Semitic remarks, has since built up a popular YouTube channel and personal website. Some 490,000 followers regularly consume his content. At one of the early protests, Jebsen interviewed Lenz and shared it on his channel. Jebsen has also claimed on YouTube that Bill Gates is manipulating the World Health Organization in order to make money selling a vaccine. That particular clip resonated with Jebsen's supporters and was widely shared online, garnering 3 million views in just one week. 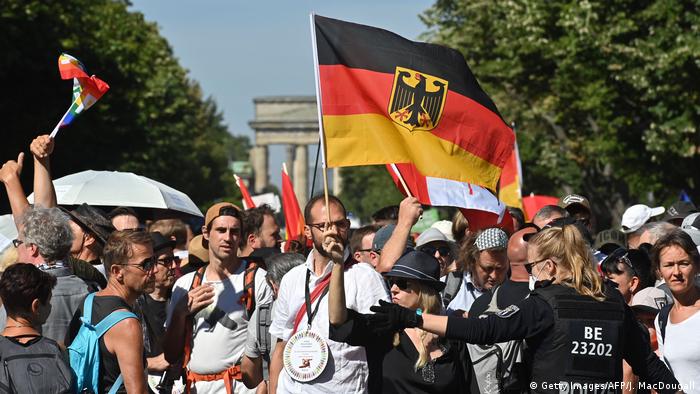 Some 20,000 people turned out in Berlin as part of the "Day of Freedom"

German cookbook author and vegan chef Attila Hildmann similarly suspects Gates of evil machinations. He has become one of the most outspoken critics of coronavirus lockdown measures. After being banned from Instagram for violating its community rules, he began posting content on messenger service Telegram, where he currently has over 68,000 followers. Hildmann deems Gates a Satanist and Merkel a Chinese puppet. He has also urged his followers to violently resist the lockdown if necessary.

Heiko Schrang's worldview is similar to Hildmann's. The conspiracy theorists makes YouTube videos in which he variously decries an alleged manipulation of society through the mainstream media, brands the coronavirus a hoax, or calls on citizens to disregard everything their leaders "up there" tell them.

Many of these conspiracy theorists have a common enemy: the German state, Bill Gates and a "Zionist global conspiracy." They often refer to one another when promoting their ideas, building on each other's crude theories.

When coronavirus infection rates recently began tapering off, their theories suddenly lost some of their appeal. But now that Germany is seeing a rise in cases once more, and a second lockdown is being considered, the movement is once again growing.

Jebsen and Hildmann both livestreamed last Saturday's anti-lockdown protest, praising those in attendance as "freedom fighters." Like other supporters of the movement, they claimed that over 1 million people had gathered in Berlin when in fact, some 20,000 turned out.

A few of those who attended sported T-shirts alluding to a book written by Heiko Schrang, who was celebrated like a pop star at the march. He gave a speech onstage, spurring the thousands of protesters on and promising that liberation from the "coronavirus dictatorship" was near. A video of his speech was viewed over 13,000 times within the first hour of being uploaded.