Increasing numbers of Germans are turning out to protest the country's coronavirus measures. Among them are many with a strong suspicion of vaccines — even though inoculation against COVID-19 is far from a reality. 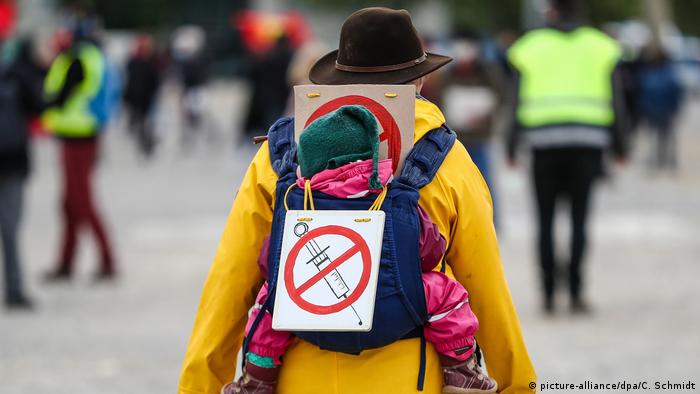 Someone has written the words "vaccine contents" in yellow chalk on the footpath along the banks of the Rhine River in Cologne. A few meters further on, an inconspicuous-looking woman adds "GG," short for the German word for Basic Law, the country's constitution, and then strikes a line through the two letters. Nearby, in the shadow of the Cologne Cathedral, people have gathered in an authorized protest "for basic rights, against compulsory masks and vaccinations, against coronavirus staging and the Gates Foundation."

But instead of the expected 50 participants, only a handful have shown up on this Monday evening. The designated speaker uses a microphone to address the small crowd, her words nearly drowned out by the shouts of dozens of counterdemonstrators telling her to "Shut up!" Later on, down by the riverbanks, a few dozen people gather near the chalk markings to form a human chain.

In a statement that evening police say the protests went smoothly, praising the fact that COVID-19 protection measures "did not counter freedom of expression and the right of assembly." In recent weeks, similar rallies have seen several attacks against journalists, along with people disregarding distancing regulations. Some rallies weren't even registered with police ahead of time.

Hour of the anti-vaxxer

The increasing number of gatherings in German cities, some under the motto "Resistance 2020," have attracted all sorts of supporters: people who belong to the far-right Reichsbürger movement, conspiracy theorists, liberals and people from the neo-right — and increasingly, those who support the anti-vaccine movement.

"Of course, vaccination is the best way to counter this pandemic," said Jan Rathje, an expert on anti-Semitism and conspiracy theories at the Amadeu Antonio Foundation in Berlin. "The idea that compulsory vaccinations will be carried out in the future is quite widespread among conspiracy theorists." He told DW that some of the people taking to the streets believe that vaccines are "harmful to the individual," and that ultimately they aren't any good for society.

According to a French online survey of parents in five European countries, Germany has a relatively high proportion of people who refuse vaccinations, when compared with the other nations; nearly 3% absolutely refuse to have their children vaccinated. The German Federal Center for Health Education (BZgA) says that around 20% of the population is skeptical when it comes to vaccines. However, a survey conducted by the BZgA shows that attitudes toward vaccinations are becoming increasingly positive in the country.

Unlike in some EU countries, in Germany it has always been up to the individual whether they want to get a recommended vaccine. Under the recent Infection Protection Act, however, the Health Ministry can now require "threatened sections of the population" to get certain vaccinations, if the federal states all agree. A law requiring children in day care centers and schools to be fully vaccinated against measles has been in force since March.

Could a tuberculosis vaccine fight COVID-19?

Vaccine opponents have pointed to this precedent when speaking out against a potential coronavirus vaccine, currently in development around the world. Health Minister Jens Spahn has said Germany won't need a law, if people immunize themselves voluntarily.

Presumably, many Germans are hoping for an eventual vaccine, even if it takes until 2021 or longer. But there is no data on whether the public would actually be prepared to get the shot, which has prompted Ken Jebsen, a former radio presenter popular among conspiracy theorists, to suspect that vaccine obligation will be introduced "through the back door."

Read more: What does 5G have to do with coronavirus? Where did it come from?

Jebsen's views have attracted the attention of his regular readers. But some people who come to the anti-vaccine protests might not be right-wing or believe in conspiracy theories; they could just be into homeopathy or anthroposophy, said Beate Küpper, a social psychologist at the Niederrhein University of Applied Sciences. A feeling of insecurity and the need for information, a particularly potent combination at the moment, could lead to "many people finding their way onto such platforms by mistake — and then getting stuck," she said.

Opposition to a coronavirus vaccination is "definitely one of the key messages" on protesters' placards, said Jan Rathje. Demonstrators are afraid they could be "forced to be vaccinated without having a say in the matter," he said, though he added that it was difficult to know how many people in these groups were actually anti-vaccination activists.

The Federal Office for the Protection of the Constitution, which is keeping an eye on the protests, has noted an increase in right-wing extremists in attendance, as well as growing anti-Semitic and anti-democratic symbols and slogans.

Küpper isn't surprised, pointing out that German society is particularly tense and inflamed right now. In February, a 43-year-old German man, radicalized by conspiracy theories, shot dead nine people with immigrant backgrounds in the Frankfurt suburb of Hanau. Küpper said the process of coming to terms with that tragic event was overtaken by the pandemic. "Unfortunately, when it comes to conspiracy theories and hatred, we're simply continuing where we left off," she said.

With COVID-19 lockdown measures partially eased across Germany, public life has regained a hint of normality. But despite the optimism many people remain uncertain and uneasy, writes Jens Thurau. (11.05.2020)