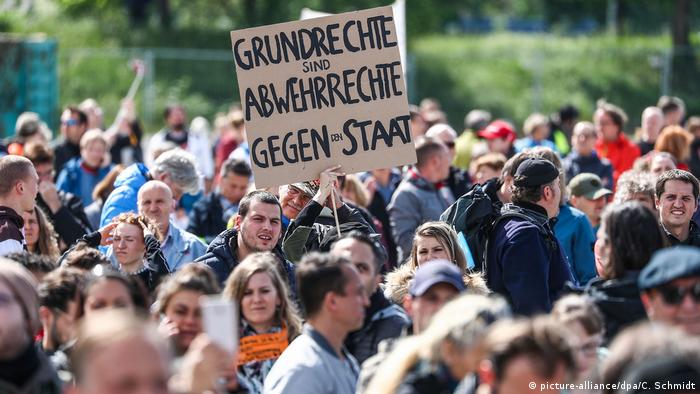 German lawmakers from across the political spectrum on Monday warned that the growing wave of anti-lockdown protests could provide fertile ground for radicalization, including from the far-right. Over the weekend, thousands of people gathered in cities across Germany to demand an end to restrictions put in place to slow the spread of the coronavirus pandemic.

Speaking with the Funke Mediengruppe newspaper consortium, Eskens said now was the time to actively resist conspiracy theorists and extremist groups trying to capitalize on lockdown cabin fever. "We have to show ourselves to be pugnacious democrats," she said.

The CDU also spoke out about the possibility radical ideologies were being promoted through the demonstrations.

"We will not let extremists misuse the coronavirus crisis as a platform for their anti-democratic propaganda," CDU General Secretary Paul Ziemiak told the Augsburger Allgeimeine daily. He added that while the government takes peoples' concerns seriously, "we must act consistently against those who are fueling citizens' worries with conspiracy theories and bringing fake news into circulation."

Speaking with Die Welt newspaper, the Green party's parliamentary leader Konstantin von Notz said it was important that people maintained their right to demonstrate. However, he said, it was imperative to stop the narrative that "all politicians are the puppets of Bill Gates and George Soros."

As for the business-friendly FDP, the party was doing damage control on Monday after the leader of their party in the eastern state of Thuringia, Thomas Kemmerich, appeared at a protest over the weekend, also without wearing the protective mask that is mandatory in public.

Kemmerich, who was at the center of a major political controversy last year when he was briefly elected state premier with the votes of the far-right Alternative for Germany (AfD), faced renewed calls from within his own party to step down on Monday.

The SPD further warned that the demonstrations and conspiracy theories were fomenting violence against journalists and police. Over the weekend, a group of right-wing extremists attacked a group of journalists in the city of Dortmund, following two similar attacks on reporters in Berlin earlier this month.

Follow the latest coronavirus developments with our rolling updates

There have also been sporadic reports of assaults and resistance to police officers. In the western town of Troisdorf on Monday, two people who attempted to enter a supermarket without wearing the required facemasks were arrested after attacking the police officers who were called to check on the disturbance.

On Saturday, some 3,000 people rallied in Munich to demand that all pandemic-related restrictions be lifted, many of them not wearing masks and in defiance of an order that protests not exceed more than 50 people. Multiple smaller protests were held in Berlin, as well as Stuttgart and Dortmund.

Authorities have noted that not only are far-right groups a regular feature at the demonstrations, but anti-vaccine conspiracy theorists as well. Instead of reducing the prevalence of anti-vaccine sentiment, the pandemic appears to be spreading false claims that vaccines actually spread diseases or are used as a tool of government control.

Other major far-right and false claims made by the protestors include the idea that lockdown measures are being used to slowly install a dictatorship, that 5G digital networks are causing the spread of the virus, or that billionaires like Bill Gates are using the pandemic as a form of control over the public.

The international scientific consensus continues to be that physical distancing measures and the wearing of facemasks in public spaces remain two of the best ways to slow the spread of the novel coronavirus and it's resulting disease, COVID-19, that has killed over 280,000 people worldwide.

Germany's coronavirus reproduction rate has remained above 1 for the second day in a row. The news comes as lockdown measures are being relaxed across the country. (10.05.2020)