Germany's top Catholic body has repudiated a warning by several high-ranking church figures that the coronavirus crisis is a pretext for creating a world government. Such conspiracy theories are rife on social media. 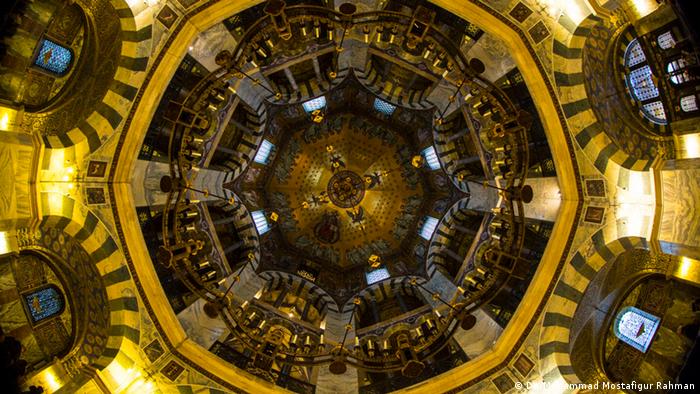 Catholic bishops in Germany have dissociated themselves from a letter in which several prominent Catholic clergy question the seriousness of the coronavirus pandemic and the measures taken by governments across the world to stem it.

Other German Catholic clergy chose harder words in their criticism of the appeal. The vicar general of the city of Essen, Klaus Pfeffer, said on Facebook that he was "simply speechless at what was being published there in the name of the Church and Christianity: crude conspiracy theories without facts or evidence, combined with aggressive right-wing populist rhetoric that sounds alarming."

The letter, signed by such Catholic notables as the German Cardinal Gerhard Ludwig Müller,  Archbishop Carlo Maria Vigano from Italy and Cardinal Joseph Zen Ze-kiun, the former bishop of Hong Kong, claims that the pandemic is being exploited to restrict basic rights "disproportionately and unjustifiably." It also maintains that the contagiousness of the novel coronavirus has been overstated by authorities, referring to unnamed "authoritative voices in the world of science and medicine" to back its claim.

It strongly criticizes governments around the world for the lockdowns imposed in a bid to stem the spread of the virus, saying that "the imposition of these illiberal measures is a disturbing prelude to the realization of a world government beyond all control."

In one strongly worded sentence, it claims that "centuries of Christian civilization" could be "erased under the pretext of a virus" and an "odious technological tyranny" established in its place.

The arguments presented in the document strongly resemble those currently making the rounds on social media, particularly in far-right and far-left milieus. They also underpin the recent "Hygiene Demonstrations" taking place across Germany.

The German Bishops' Conference had earlier stated that the restrictions in Germany, which also led to the temporary cancelation of church services, were "sensible and responsible," while urging a "responsible and proportionate" relaxation of the measures when appropriate.

Facebook has been flooded with campaigns touting fake cures and conspiracies about the origins of the virus. The new features include warning ordinary users who have liked or shared inaccurate or harmful material. (16.04.2020)

Analyzing the spread of disinformation

As Germany battles a fifth coronavirus wave, people took to the street to rail against COVID-19 restrictions and a possible vaccine mandate. Others marched for "solidarity instead of conspiracy theories."