What started as an unsubstantiated conspiracy theory has received a second major boost from the Trump administration. US Secretary of State Mike Pompeo says China has a history of running substandard laboratories. 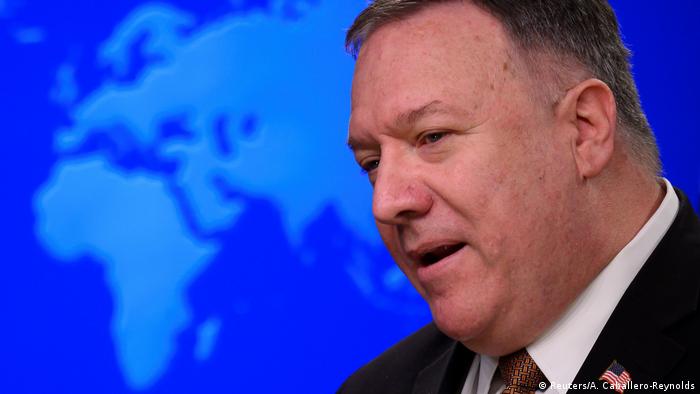 US Secretary of State Mike Pompeo said on Sunday there is substantial evidence that the coronavirus pandemic originated in a laboratory in Wuhan, China.

"There is enormous evidence that this is where it began," said Pompeo on US broadcaster ABC's ThisWeek show, referring to the Wuhan Institute of Virology (WIV).

But while being highly critical of China's handling of the pandemic outbreak, the US chief diplomat declined to say whether he thought the virus had been intentionally released.

"I think the whole world can see [it] now; Remember, China has a history of infecting the world and running substandard laboratories," Pompeo added.

His comments echo those of US President Donald Trump who said this week he had seen evidence linking the Wuhan lab to the contagion, without giving further details.

Scientists believe the killer virus jumped from animals to humans, possibly from a market in Wuhan selling exotic animals for meat. However, conspiracy theorists have spread rumors that the virus was synthesized at WIV and possibly released intentionally.

The unsubstantiated accusations have gained enough traction globally to prompt the Office of the Director of US National Intelligence and the World Health Organization to this week to deny them as pure speculation.

"The Intelligence Community also concurs with the wide scientific consensus that the COVID-19 virus was not manmade or genetically modified," a statement from the office said on Friday.

The WHO emergencies chief, Michael Ryan, insisted on Saturday that the virus was not manmade.

However, concerns are growing about a possible Chinese cover-up, boosted by revelations from a new 15-page dossier compiled by Five Eyes intelligence agencies of the US, Australia, NZ, Canada and the UK.

The dossier, first revealed by Australia's Daily Telegraph on Saturday, mentions that staff from the WIV who were either trained or employed by an Australian animal health laboratory where they conducted research on deadly pathogens in live bats, including the deadly respiratory disease SARS.

The dossier also examines the destruction of evidence from laboratories in China and the country's refusal to provide live virus samples to international scientists.

Despite the new claims, the Australian government's position remains that the virus most likely originated in the Wuhan wet market, with a 5% chance it accidentally leaked from a laboratory, reported the newspaper.

Whether other leaders believe in the lab theory or not, calls for an international probe into the origins of the outbreak have been growing.

Germany's Foreign Minister Heiko Maas on Sunday called for China to provide an explanation for the origins of the virus: "It is in the whole world's interest that the precise origin of the virus is clarified," he said in comments to Funke Mediengruppe – Germany's third-largest newspaper and magazine publisher.

Facebook has been flooded with campaigns touting fake cures and conspiracies about the origins of the virus. The new features include warning ordinary users who have liked or shared inaccurate or harmful material. (16.04.2020)