Demonstrators gathered in Berlin, Munich, Stuttgart and other German cities to decry coronavirus-triggered restrictions imposed by the government. A right-wing protester attacked a team of reporters in Dortmund. 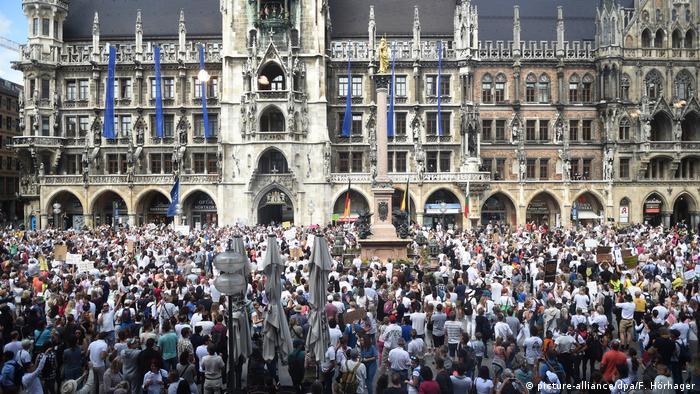 Over 3,000 people rallied in Munich and thousands more gathered in Stuttgart and across Germany on Saturday to demand the lifting of restrictions ordered by the German authorities. Many of the protesters defied the guidelines which call for a limited number of participants and for social distancing to be maintained during such events.

The protesters accuse politicians and medical workers of spreading panic and infringing on the population's rights with the prolonged lockdown. Some of the rallies included anti-vaccination activists.

In Munich, police used loudspeakers to urge the protesters to minimize the infection risk. While the participants failed to heed the instructions, the police decided not to disperse the gathering "on the grounds of proportionality" as the participants were not violent. However, the authorities dispersed a separate right-wing demonstration which gathered around 25 people in the same city, according to the Germany's public broadcaster ARD.

The Stuttgart event also saw thousands of participants take part. Most of them respected the distancing rules, according to the police. Two separate protests were recorded in Berlin, including a smaller one in front of Germany's parliament that ended with the security forces detaining around 30 protesters in order to determine their identity. The larger one saw hundreds of people gather at the Alexanderplatz, in spite of the order which limits the maximum of 50 protesters per rally. 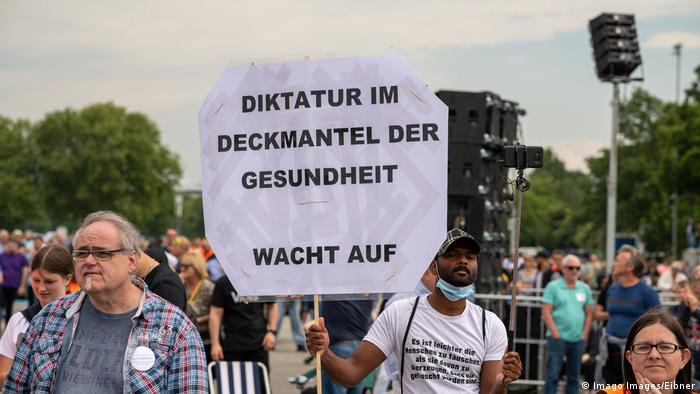 Stuttgart protester holds a sign reading: 'Dictatorship in the guise of health. Wake up.'

About 150 people, including a group of known right wing extremists, also gathered in the western city of Dortmund, according to the DPA news agency. One of the right-wingers insulted and subsequently attacked a team of reporters, lightly injuring one of them, according to the police. The 23-year-old was arrested. This assault follows an attack of on a crew working for the satirical Heute-Show at a similar protest on May 1 in Berlin, and a separate attack on another team of journalists on May 6 in the same city.

Germany has been slowly easing restrictions introduced in mid-March, with states opening various businesses and public sites starting this Monday. However, a new report by the country's official Robert Koch Institute indicated a steep rise in infection rates on Saturday, possibly prompting the politicians to respond with even more caution.

Over two-thirds of German residents support the need for social distancing, according to the latest research published by the official BfR Institute. However, this still marks a sharp drop from the numbers reported in March, when 92% supported the restrictions.

For the second time in a week, journalists in Berlin were attacked by members of the public. Illegal anti-lockdown protesters turned on a camera team, in a move decried by German Foreign Minister Heiko Maas. (07.05.2020)