Berlin prosecutors probing Friday’s attack on a crew filming for a satirical news show on public ZDF television say their probe is proving "complicated." Some 15 persons are suspected of injuring five team members. 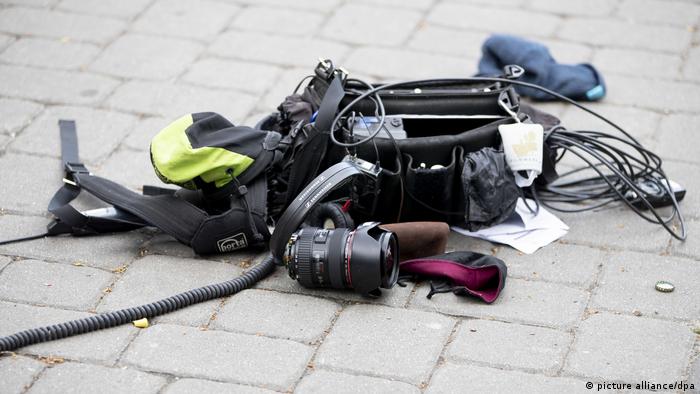 Berlin prosecutors said Monday the dynamics and complexity of Friday's attack coupled with the need to interview numerous more witnesses and gather videoed evidence did not yet provide them with a reliable overview.

"The testimonies given so far do not give a consistent picture in all details," said prosecutors, who said they had, however, begun investigations against 15 persons.

Read more: Opinion — Do not silence journalists during coronavirus pandemic

The popular weekly center-left satirical news summary is produced from Cologne for ZDF, Germany's second national channel based in Mainz in Rhineland Palatinate.

Read more: 'Corona has reminded us what news is supposed to be'

Berlin police, who initially said they briefly detained six persons, including some from Berlin's "leftist scene," say Abdelkarim's team, while returning to its vehicle, was intercepted by 20 to 25 masked persons.

Joining a weekend outcry led by Germany's DJV journalist union, the German government on Monday said it condemned the attack in the "strongest terms."

"We see that extremists of all stripes literally trample on the freedom of the press, one of our most important fundamental rights, by using threats and violence against journalists," said Steffen Seibert, spokesman for Chancellor Angela Merkel and himself once a ZDF presenter.

Already, federal interior minister Horst Seehofer had said that the state had a responsibility to ensure that the freedom of the press was guaranteed "at every moment and every location."

Those who attacked journalists "must experience the power of our constitutional state," added Seehofer.

Marlehn Thieme, the chair of ZDF's supervisory council comprising representatives from diverse branches of German society and business, said violence and extremism would not vanish amid the "Corona situation."

"It is therefore all the more important that public broadcasting counters this [trend] with its programing," through balance presentation of information as well as pointed satire, said Thieme.

In a further development Monday, Berlin police said they were investigating a police officer under suspicion of having struck a woman journalist in the face while on duty.

Public Berlin-Brandenburg broadcasting said she had been part of a team filming an arrest late Friday in the city-state's Kreuzberg district where May 1 demonstrators scuffled with police.

Rights groups say that PM Sheikh Hasina's government is trying to conceal information about COVID-19. Experts say the public health crisis in Bangladesh is far worse than what the authorities are projecting. (04.05.2020)