Threatened, maligned, jailed: Journalism in the coronavirus pandemic | World| Breaking news and perspectives from around the globe | DW | 03.05.2020

Populism, political power grabs and financial trouble: Christian Mihr of Reporters Without Borders tells DW that journalists around the world face growing threats in the age of COVID-19. DW: What effect has the global coronavirus pandemic had on press freedom?

Christian Mihr: What we are currently seeing is not the arrival of new authoritarian regimes or attacks on freedom of the press, but rather an increase in tendencies that already existed before the pandemic hit. One could say the crisis has hardened the approach many authoritarian or dictatorial governments have taken against journalists.

Do you have concrete numbers to illustrate the growing problem?

We will not be able to say with certainty just how many journalists have disappeared or been jailed since the coronavirus pandemic began until the end of the year. However, we can report that as of today at least 231 professional journalists and 115 so-called citizen journalists and bloggers — that is, people disseminating information on authoritarian governments via YouTube or Facebook — are currently behind bars. Another 14 media professionals (photographers, camera operators, editors, etc.) are in jail as well. 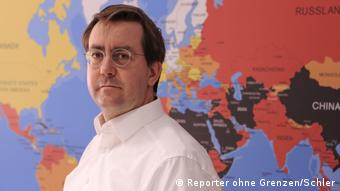 Christian Mihr is director of Reporters Without Borders Germany

What governments are making the most use of the coronavirus pandemic as an excuse for cracking down on freedom of the press?

The situation in China is certainly the most extreme. We have seen that a number of citizen journalists reporting on the situation in hospitals in Wuhan, the epicenter of China's coronavirus pandemic, have either disappeared entirely or for a longer period of time. They simply reported that the government has not been as successful in fighting the coronavirus as it has claimed and the government has made a concerted effort to ensure that information does not get out. We have no idea what has happened to these people.

But is China the only government seeking to muzzle coronavirus reporting?

No, there are a number of other examples. In Armenia, for instance, journalists reporting on the coronavirus are only allowed to cite official government statistics. In Serbia, a journalist was arrested for reporting on the situation in hospitals in the city of Novi Sad. Hungary recently enacted state of emergency laws that allow the prime minister to jail journalists for up to five years for what the government calls unbalanced reporting. Sadly, I could list a number of other examples. The virus and repression have been spreading simultaneously.

Let's talk about the US, a country long held up as a beacon for press freedom. What are you seeing there right now?

Like elsewhere, we have seen troubling tendencies simply grow worse. On the one hand, President Donald Trump is personally responsible for a deterioration of press freedoms in the US. We have watched as journalists with epidemiological views that differ from the government's, or criticizing the administration's response to the crisis, face blanket defamation, being collectively denounced as "fake news." That is a tendency that has only gotten worse of late. Over the past three years we have seen a troubling development in the US in which journalists increasingly face verbal and even physical threats and attacks. We will have to wait and see if the situation continues to deteriorate.

What role does "fake news" play?

I prefer to talk about intentionally misleading information and disinformation. For instance, Russian disinformation campaigns promote stories about the things that Europe and especially Germany are getting wrong in their responses to the coronavirus pandemic. These include stories claiming that Germany's health system is entirely overburdened. In the US, outlets such as Fox News, a private company with very close ties to the Trump administration, has essentially become a megaphone for the White House. Fox is seemingly uncritical in its dissemination of information such as President Trump's recent suggestion that people could inject disinfectants [to keep them virus free]. That is grossly negligent.

How is the situation in Germany?

We have yet to see any systematic attempt to curtail press freedom in Germany. Still, the issue of coronavirus tracing apps is one that we are watching very closely. I do not think press freedom is an absolute right. I think it is important to weigh it against people's health. Nevertheless, we have to be very careful in weighing the two against one another. The introduction of such apps can certainly be justified, but at the same time we have to ensure journalists' rights to protect sources aren't thrown under the bus as a consequence.

Can a tracking app get us back to normal?

Privacy or movement? Can a coronavirus tracking app help get life back to normal?

What structural problems has the crisis brought about for journalism a whole?

There are structural problems when it comes to financing journalism. Media markets that were already struggling before the crisis broke are in even worse shape now. That includes markets in which the state has had to step in financially because advertising revenue has dried up. That opens the door for governments to exert or even abuse their newfound influence. That is something altogether different from attempting to exert influence through advertising.

What long-term consequences will the crisis have for the global media landscape?

I think it is too early to say because we have no idea how long the crisis will actually last. I think there are two things that will become more pronounced, both in the negative and the positive. First, we will have to take a long, hard look at the issue of the financing of private media outlets around the world. That is a problem that will become more intense at the end of this crisis. We will also have to rethink the way that journalism is financed as a whole. On the other hand, there is a lot of great journalistic work being done around the world — work questioning corruption, but also moving into the realm of scientific journalism. We are seeing a lot of reporting and research that openly questions government policy around the world — journalists heroically asking questions, even in countries like China.

Christian Mihr is a journalist, human rights activist and an expert on international media policy. Mihr has been the director of Reporters Without Borders Germany since 2012.