A law that holds a prison sentence of up to five years for spreading "false information" is part of new measures against COVID-19. As Fanny Facsar reports, journalists fear it could make it even harder to report news. 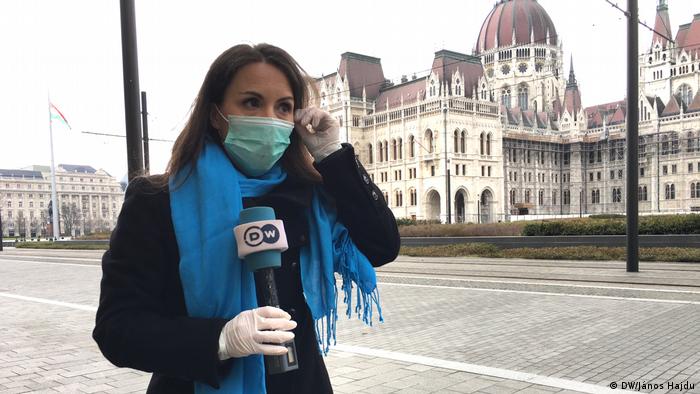 These are turbulent times in Hungary, with a single political decision receiving massive international attention. It's not the first time Hungary has been in the headlines for government decrees that have raised eyebrows nationally and internationally. Prime Minister Viktor Orban has freely described his understanding of democracy as "illiberal," and refers to his decisions as "unorthodox."

'Who defines what 'distortion' means?'

The government's latest move was to prolong the emergency decree for an indefinite time, a response to the COVID-19 pandemic. Part of those emergency powers is paragraph 337, which contains a prison sentence of up to five years for spreading "false information."

Some journalists in Hungary now fear this may make it even harder to report the news. Most of the Hungarian media is either managed or owned by people loyal to the government. But there are still some critical outlets — online and smaller newspapers — which have raised the alarm about the law.

"This law creates a lot of uncertainty because you do not know how decisions will be made," said Zoltan Batka, who writes for Nepszava, a small daily newspaper. He usually focuses on topics revolving around corruption. "Even if you spread true information in a distorted way which could curb the protection of Hungary, you face jail time. But who defines what 'distortion' means?"

Despite the new law, Batka wants to report like he did in the past, without any fear. "Already our work is difficult: I write 10 emails to various ministries of the government and maybe one email gets answered." That reminds me of a press conference in the parliament of Budapest in 2018, when Orban was reelected for a third consecutive term. I remember how almost exclusively questions by government-friendly media were accepted, and the questions by independent domestic or international media bluntly rejected, very briefly answered or completely ignored with a smile by the prime minister.

'Unclear' what will remain of 'critical press'

Veronika Munk, the deputy editor of Index.hu, Hungary's most popular news website, does not believe the law may lead to self-censorship. "Getting an interview on record by a doctor, for example, is difficult regardless of the law. Many of our sources reach out via email and want to remain anonymous," she said. "We do not know how this law will be applied and maybe I am naive but I want to believe that things will not be worse, or as bad as in Russia, when it comes to the press."

Munk sees a different problem at this point: "Those few critical media outlets that depend on advertisement will lose important income, so it is unclear what [will] remain of what's left from the critical press once this crisis is over."

Marton Gergely, editor at HVG, a weekly magazine, is disappointed. "With this law we are being thrown into the pit: we are being branded and stigmatized and we are under greater pressure than before," he said. Marton said that if Orban wants to throw journalists into jail, he could use other laws — "this is only about increasing pressure and portraying journalists as potential criminals."

On a stroll through Budapest, by chance I get into a conversation with a woman working in fashion design. "I've been asked by the government to produce face masks and other clothes for medical staff for a few euros," she said, without giving her name. It will be anonymous sources like her that Hungarian journalists will have to rely on to report about the true scale of the crisis, sources they will not find in government statements. But whether it will be labeled as "false information" with dire consequences for the author is the question that no one can answer today. All legal tools to silence free media are now in place.