The staff at "Vedomosti" are defying the paper's new editor-in-chief, who they say is undermining the publication's journalistic independence. Now the conflict is threatening the media outlet's funding as well. 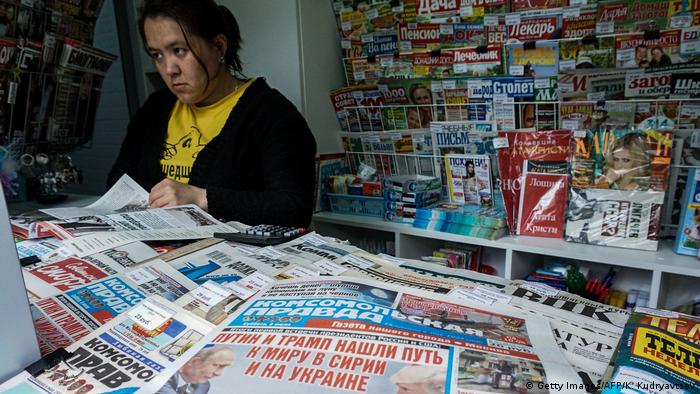 Tensions reportedly started right after the first staff meeting with the new editor-in-chief of Vedomosti. Since Andrey Shmarov started in the job at the end of March, journalists at the paper say he banned them from writing about Vladimir Putin's controversial constitutional reforms, which could keep the Russian president in power far beyond his current term limit. Apparently he also told them not to cite surveys by the independent pollster Levada Center, an accusation Shmarov has denied. The editor has also deleted a column about the Russian oil giant Rosneft and changed the title of another column.

Vedomosti media editor Ksenya Boletskaya tells DW that many of the steps caused a "violent emotional reaction" in the team, which values its editorial independence above all. Vedomosti staff began openly defying Shmarov. In an editorial, staff wrote that his editorial changes "are damaging trust in the publication," accusing Shmarov of censorship. Without the journalistic principles its reputation is based on, they wrote, Vedomosti will become "yet another dependent and controlled media outlet," adding: "There are enough of those already in Russia."

Boletskaya says that many of the paper's readers have commented under articles that they plan to unsubscribe from Vedomosti because they are no longer sure of its "independence and transparency." Shmarov himself told the Financial Times (FT), which used to co-own the paper along with The Wall Street Journal, that he was not "at war" with staff and hoped he could improve his relationship with his team.

Shmarov was put at the helm of the paper after its publisher made a deal to sell it to new owners. But the FT has cited sources saying the scandal has led one of the buyers to pull out of the deal, which could leave the paper in freefall. So far the lockdown has also delayed paperwork needed to complete the deal.

Now the paper is in a strange sort of limbo. Not only is it no longer clear who owns it, but Vedomosti was recently excluded from a government list of essential companies that will receive support during the crisis caused by the new coronavirus.

Russia's deputy communications minister Aleksey Volin has said that the decision to exclude the paper from the list was partially to do with the ongoing conflict within the paper. He compared the editorial team with a bus with no driver, where several people are fighting for the wheel. "That is not the symbol of an essential business at all."

According to media expert and publisher Ivan Zassoursky, if Vedomosti has to close, the Russian media would be losing a publication that has been "a rare standout on the media market," a newspaper with "with its own voice, its own editorial policies which are strictly adhered to."

He thinks that with the loud debates about the editorial line and funding of the paper, it "could lose its halo as the main business newspaper." Zassoursky tells DW that receiving government funding could help save the paper, especially as the coronavirus has cut into its income from conferences and events — but it would also harm the independent reputation of Vedomosti.

Vedomosti editor Boletskaya also insists that the paper is an "institution," one of the big players that have access to important government officials but don't dance to their tune.

Vedomosti was founded in 1999 and has since remained independent despite censorship having slowly increased under Vladimir Putin. Television in Russia is almost completely state-controlled and in recent years many media outlets, including Vedomosti's main competitors, like business daily RBC, have seen their editors replaced with more pro-government figures. Last year, another of Russia's big business papers, Kommersant, saw its entire political department walk out after a new editor-in-chief fired two journalists for reporting about a potential reshuffle in Russia's upper house of parliament.

When it comes to the sale of Vedomosti, media expert Zassoursky argues that the new owners must be aiming to exert political influence there as well. With the newspaper industry dying, he says he can see no other reason why people would buy a paper like Vedomosti.

With the outrage about the paper's new editor Andrey Shmarov, both the former owners of the paper and the new buyers have refused to take responsibility for hiring him. Meanwhile the critical online platform Meduza has cited sources saying the new editor is a "candidate of the presidential administration."

The Kremlin's spokesperson, Dmitry Peskov, has denied this and has said that censorship is unacceptable. "We are interested in the newspaper Vedomosti continuing its work on its current highly professional level."

Ilya Graschenkov of the Center for the Development of Regional Politics tells DW that "this conflict is very uncomfortable for the Kremlin." But the independent political analyst suspects the origins of the conflict over Vedomosti are likely part of a power struggle that does not come directly from the Kremlin.

Meanwhile, Vedomosti editor Boletskaya sees the growing pressure on the paper as part of a wider trend.  She says that as many other big liberal media outlets were closed or brought into line, Vedomosti "stood out too much." "We almost look like we are the opposition," she explains, while emphasizing that her opinions don't represent those of the whole team.

Boletskaya says some of her colleagues have already decided to leave the paper. As a media expert, she isn't optimistic about the future of Vedomosti as it faces economic and political pressures. But she is one of many at the paper who are prepared to keep fighting. "We value this newspaper so much — not even for ourselves but for our readers. So we want to do everything to ensure it keeps reporting."

Officials said Ukrainian grain shipments are set for export within days under a UN-backed deal, after a Russian strike on the port of Odesa cast doubt over Moscow's commitment. DW rounds up the latest.