Reporters at the Vedomosti newspaper have said their new editor-in-chief is taking cues from the Kremlin. Anyone who flouts pro-government rules is fired, they said. 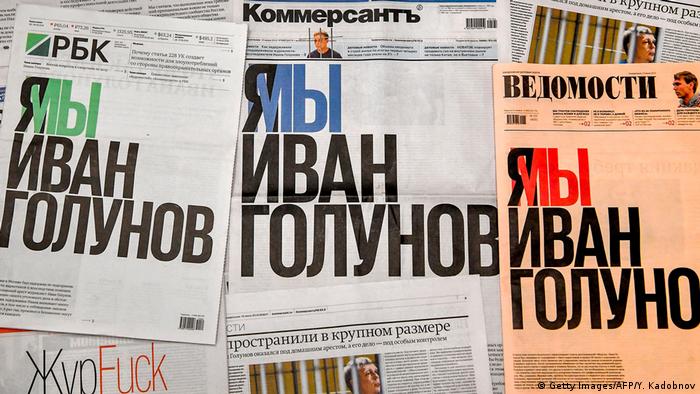 Under its old leadership, Vedemosti was one of the papers to run the headline 'I am Ivan Golunov' when the investigative reporter from a different media outlet was detained on questionable drugs charges

In a searing op-ed and public statements, the staff said Shmarov had banned them from reporting on data from a pollster that had angered President Vladimir Putin, and from publishing stories critical of Putin's constitutional changes that would allow him to stay in power until 2036.

According to media reporter Kseniya Boletskaya, anyone who tried to resist these polices would be fired.

In their op-ed, the journalists said they were determined to maintain the newspaper's values, such as neutrality, even in the face of pressure from Shmarov.

"Having lost its reputation, Vedomosti will become another dependent and managed media outlet whose aim is not to satisfy readers' needs with news that has been verified and quality analysis, but to serve the interests and ambitions of its official and secret owners," they added.

Staff said that they were punished last month ­for publishing a poll from the company Levada, which was classed as a "foreign agent" by the Russian government in 2016. In the poll, 38% of Russians said they believed Putin represented only the interests of bankers, oligarchs, and big businesses.

Speaking with Reuters news agency on Friday, Shmarov denied threatening to fire anyone, and said his editorial decisions were made completely independently and without instruction from any officials.

Putin's spokesman Dmitry Peskov also denied that the Kremlin had anything to do with Vedomosti's journalistic output.

However, Vedomosti chief editor Dmitry Simakov contradicted his boss when speaking to Reuters, saying that the editor-in-chief "yesterday said that he went to the presidential administration for an interview before being appointed and that they drew him red lines [not to cross] and that the most serious one was Levada," he said.

"Yesterday…he told me not to mention Levada anymore. Otherwise, he said they [the Kremlin] would remove him and everyone else and that the publication didn't have any money," Simakov added.

The EU also spoke out against Russian restrictions to press freedom on Friday. The bloc's top diplomat Peter Stano said that "over recent years, we have seen that the space for independent journalism and civil society in the Russian Federation has decreased. Incidents of intimidation, threats and violence against journalists are frequently reported."

"The EU condemns unequivocally all threats, verbal attacks or violence against journalists in pursuit of their work," Stano said.

Each evening, DW sends out a selection of news and features. Sign up here.

Germany moved up to 11th place, despite confidentiality challenges posed by the government’s crackdown on the handling of leaked data. The index ranks nations in terms of pluralism, media independence and transparency. (21.04.2020)