Coronavirus anger foments violence against journalists | Germany | News and in-depth reporting from Berlin and beyond | DW | 10.05.2020

Protesters from across Germany's political spectrum are demonstrating against coronavirus restrictions. But their ire is also directed at established media outlets, making life increasingly dangerous for journalists. 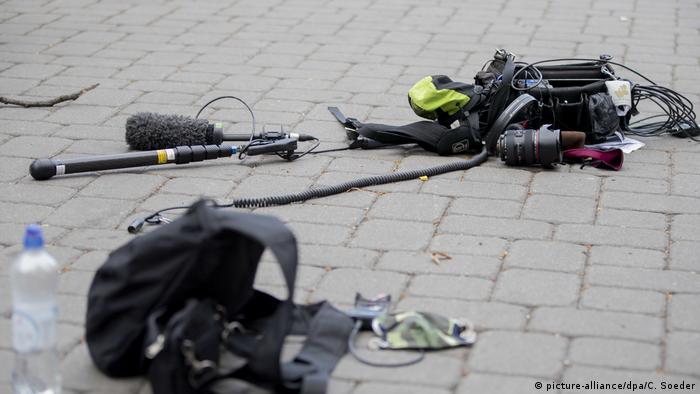 In Germany, resistance is growing to the measures imposed by the government to try and stop the spread of the novel coronavirus. Critics of the measures say that the restrictions on basic rights go much too far. Many are even worried that vaccinations against it may be made compulsory — even though a vaccine against COVID-19 has yet to be found.

The biggest demonstration against the coronavirus measures took place last Saturday in the southern city of Stuttgart, with organizers claiming that it drew some 5,000 participants. Police described the rally as largely peaceful.

But such demonstrations do not always go off without violence. In particular, it sometimes becomes ugly for journalists covering the protests. In the capital, Berlin, two camera teams from public service broadcasters were attacked within the space of a few days. 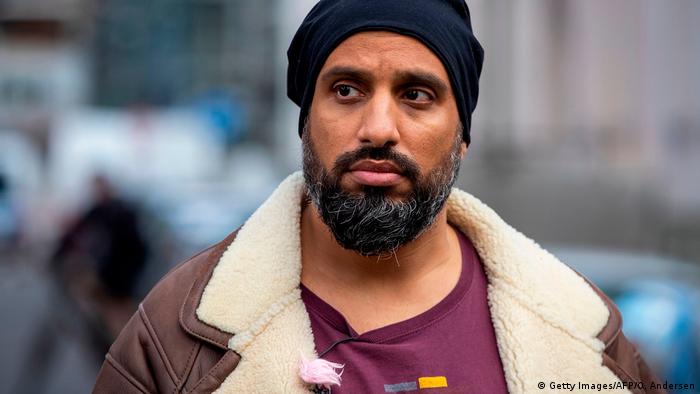 A crew from the TV broadcaster ZDF had finished filming a so-called Hygiene Demonstration on May 1 for the satirical "Heute Show" ("Today Show") when it was set upon by some 15 hooded people, possibly with malice aforethought. Several members of the crew were injured, some severely. According to media reports, the attackers used metal bars and cudgels.

The incident provoked consternation across Germany. The secretary general of Chancellor Angela Merkel's conservative Christian Democratic Union (CDU), Paul Ziemiak, wrote on Twitter that he was "stunned by the cowardly attack on the crew of the Heute Show and thus on the freedom on the press" in Germany.

The "Hygiene Demonstrations" have recently attracted an unusual mixture of participants. Right-wing populists and far-right extremists have joined forces with leftist critics of capitalism and anti-vaxxers. Conspiracy theorists have also been among the demonstrators.

The attack on the ZDF team is being investigated by police from the state security department, which investigates politically motivated crimes. Six people were arrested shortly after the attack near the scene of the assault. The first indications seem to suggest they could be part of the far-left scene. But police have said that contradictions between witness statements are making the investigation difficult. 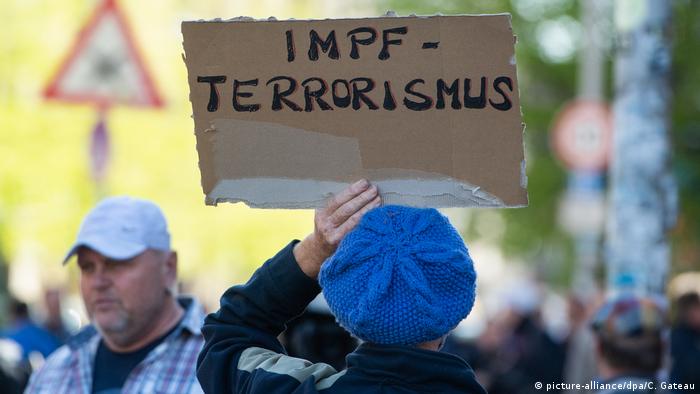 This demonstrator is protesting against 'vaccine terrorism'

Just a day before the attack on the journalists, on April 30, a former moderator for the radio station Rundfunk Berlin-Brandenburg (rbb), Ken Jebsen, published an editorial on his website "KenFM," where he regularly promulgates conspiracy theories. In it, an author by the name of Bernhard Loyen wrote that he had "learned by chance" that the ZDF wanted to deliberately pick out the most irrational and confused protesters to "make them look like fools" in front of its "thirsting" viewers. Loyen claimed that public service media saw anyone who took to the streets as "conspiracy theorists, confused souls or Nazis, or all three in individual combinations." The editorial then calls for resistance: "Resistance must grow. Now."

Conspiracy theories about the media

Another attack on representatives of the media occurred in the same week. At a rally of some 400 participants in front of Berlin's Reichstag building, one of the demonstrators emerged from the crowd and, according to police, tried to kick a boom microphone operator from public broadcaster ARD. In the process, he hit the boom mic, which then struck the cameraman's head. Police say the 46-year-old attacker is facing criminal assault charges. Videos of the incident on Twitter show that police reacted quickly and arrested the attacker.

The rally had been called by the prominent chef Attila Hildmann, who has recently attracted attention for his promulgation of conspiracy theories, such as the one that claims Microsoft founder Bill Gates is behind the spread of the novel coronavirus. Hildmann also regularly delivers diatribes against "the media." In one post, he said people should never trust what is said or shown by the media, claiming that media were "a staged front to make it easier to grab power."

This statement seems to have fallen on fertile ground with his supporters: The attack on the ARD crew at the demonstration he initiated was preceded by calls of "lying press." And after the attack, demonstrators even supported the attacker and called on police to release him. The German foreign minister, Heiko Maas, posted on Twitter after the incident, saying that whomever attacked journalists was opposing democracy. 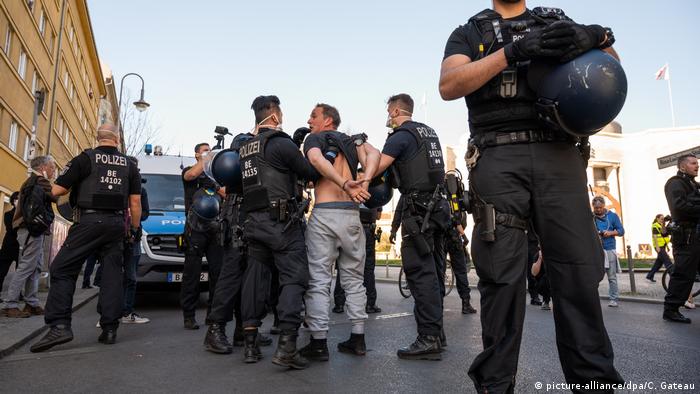 Police have made several arrests at the demonstrations

Read more: German attack on journalists to be investigated for political motives

It is not just physical attacks by people opposed to coronavirus measures that are putting journalists under pressure. In Stuttgart, too, where the biggest peaceful demonstration against the restrictions in Germany took place, lambasting the media was part of the protest agenda. Particularly the organizer of the demonstration, the IT entrepreneur Michael Ballweg, criticized media outlets such as ARD and RTL for a style of reporting that in his opinion is one-sided and erroneous. As one example, he claimed that the broadcasters had incorrectly cast the demonstrators as anti-vaxxers, PEGIDA supporters and conspiracy theorists. 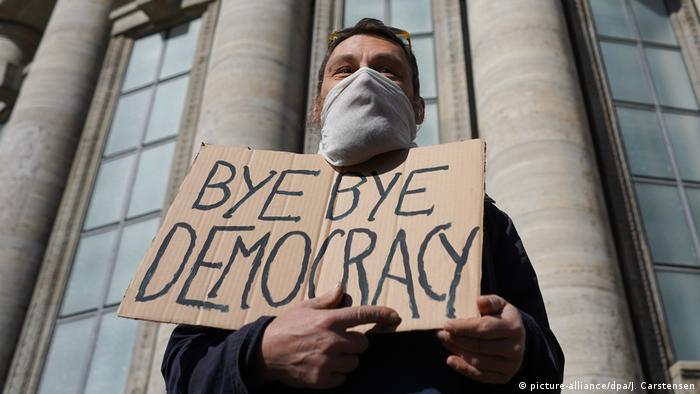 For this reason, Ballweg has called on ARD and RTL to correct their reporting and to show footage of the demonstrations that confirms the falsity of their coverage. Otherwise, he says, he will exclude representatives of the media from future demonstrations. Even now, all journalists who want to talk with Ballweg and his fellow campaigners have to fill out a form online in which they undertake "to report truthfully, impartially and in full." Ballweg has instructed journalists that this form also has to be taken along to the demonstrations and presented.

In his speeches at demonstrations in Stuttgart and his YouTube videos, Ballweg frequently refers to the German constitution, or Basic Law, particularly Article 5, which guarantees freedom of opinion in Germany. That's another thing the journalists have to declare their commitment to in the online form, particularly the phrase: "There shall be no censorship."

No journalist is going to have a problem with this part of the law. But perhaps some will take issue with Ballweg himself: Germany also has a law on public assembly, which among other things stipulates that no one is allowed to exclude journalists who have a valid press ID from attending public gatherings.

Intimidation, imprisonment or even death are growing threats to journalists in Europe today, new data from 2019 has shown. Over 30 journalists were assaulted in Europe last year, and over 100 are currently behind bars. (29.04.2020)

Germany moved up to 11th place, despite confidentiality challenges posed by the government’s crackdown on the handling of leaked data. The index ranks nations in terms of pluralism, media independence and transparency. (21.04.2020)

Since 2015, the DW Freedom of Speech Award has honored persons or initiatives for their outstanding promotion of human rights and freedom of expression. Learn more about the award and laureates.  (19.02.2019)