Opinion: Germany should not ban protests by coronavirus deniers

Even though the protests against coronavirus restrictions are disturbing, they are a sign of a free society and should be allowed. A ban is just what the protesters are waiting for, says DW's Marcel Fürstenau. 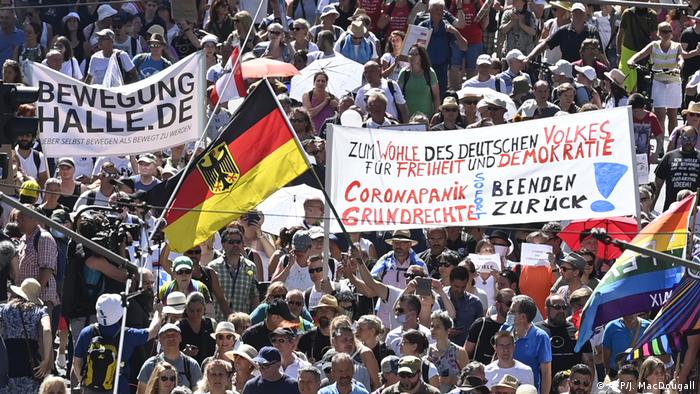 There were no masks, no physical distancing. Protesters demonstrating on Saturday in Berlin against restrictions put in place to curb the spread of COVID-19 deliberately intended a provocation. The protest was an attack on the rationality and solidarity that the majority of German society has demonstrated since the outbreak of the novel coronavirus months ago. By far most of the people who live in Germany have accepted the measures with more or less enthusiasm because they are sure that such restrictions are the only way of overcoming the pandemic in the long term.

The reward for so much patience and public spirit has been relatively low levels of infection and a low death rate, particularly compared to many other countries. And, as a result, the restrictions have gradually been eased. Most cafes and restaurants reopened a long time ago. Many cinemas are showing films again and concerts are also taking place. Travel is no longer banned and students are going back to school.

In view of all this, the bizarre demonstration on the weekend seems all the more absurd and disturbing.

Most of those who gathered obviously only think of themselves. They may have had different motives for attending the protest, but they were united by their selfish behavior: They did not take responsibility or show any consideration for others. Their slogan speaks volumes: "The end of the pandemic — day of freedom." It's hard to imagine people could be more ignorant and foolish.

Nonetheless, it is good that this protest, however grotesque, took place. It is not so good that the protest has now triggered a knee-jerk debate on whether to clamp down on people's freedom to demonstrate. A ban on demonstrations of this kind would only give the participants more fodder to rally against the state and argue that their fundamental rights are under threat. As things are, this same democratic state, which the demonstrators very obviously have so little respect for, let the protest go ahead — and achieve nothing. 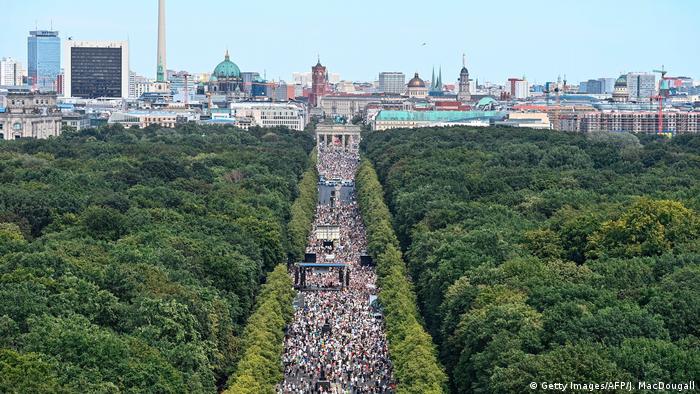 Many of the 20,000 participants in Berlin dismissed the coronavirus as a "false alarm"

The protesters, who had come from all over Germany, could not have come across as more ridiculous. They paraded their narrow-mindedness and intolerance to the whole world, making it all the more apparent on what side foresight and tolerance are to be found. Despite all the justifiable anger at these seemingly incorrigible and reckless protesters, the demonstration was also a triumph both of democracy and of the rule of law in Germany.

For those who refuse to comply with the law or obey regulations have to suffer the consequences. This is what happened in Berlin, where the police had already filed criminal charges against the protest's organizer before the demonstration had come to an end: because hygiene regulations had not been adhered to.

And when protesters continued to violate regulations, police broke up the demonstration, proving that the state is perfectly capable of action. Some might argue, on account of the disturbing scenes and sometimes aggressive atmosphere, that the police acted too forbearingly and too late. But protests such as these, absurd as they might be, must be allowed to take place.

They might be hard to accept, but they are also the expression of a free society.