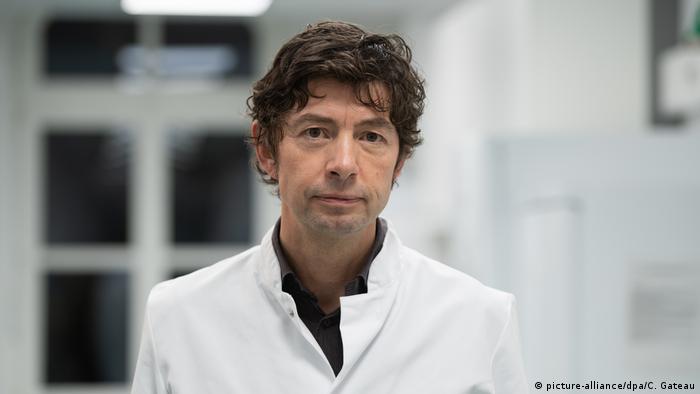 Every country has at least one high-profile COVID-19 expert, who has become as recognizable as the country's leader.

And Germany is no exception. Christian Drosten quickly became a household name when he took on the role of the government's go-to expert on COVID-19.

The top virologist of the renowned Charité hospital in Berlin, and was one of the scientists to discover the SARS virus in 2013. Drosten became known to a wide audience through a daily audio podcast from German regional broadcaster NDR "Das Coronavirus-Update," in which he answered questions about COVID-19. The podcast quickly became a huge success with more than 43 million downloads or plays.

But as more people began to deny the COVID-19 threat and began to demonstrate against the lockdown measures, Drosten and other virologists were accused of fearmongering and began to see the darker side to the newfound public attention.

Read more: Coronavirus —When will the second wave of infections hit?

Earlier this week, Germany's biggest tabloidm, Bild, accused Drosten of publishing fake figures in a study on COVID-19 in children, with the aim of pushing an alleged political agenda.

Together with a research group, Drosten had examined the viral concentration of COVID-19 in the throats of children and adults. He came to the conclusion that contrary to prior estimates, children may be affected by the virus the same as adults. The findings were criticized by some fellow scientists.

But the Bild newspaper claimed that Drosten's study led to the closure of schools and kindergartens across Germany, which those who opposed the restrictions saw as a mistake.

What followed was a weeklong back and forth about scientific procedures and journalistic ethics. On Twitter, economist Jörg Stoye called the Bild’s coverage an "anti-Drosten campaign."

Doubts over Drosten's advice and the action taken to contain COVID-19 have become louder in recent weeks, both on social media and on the streets, where thousands were turning out to protest lockdown measures, among them far-right extremists and conspiracy theorists.

Earlier in May stickers began appearing on lampposts in Munich comparing Drosten with Joseph Mengele — the infamous Nazi physician who carried out monstrous medical experiments on prisoners at Auschwitz concentration camp. "Trust me, I'm a doctor," read the slogan under the photos.

Drosten and other virologists have been discredited by politicians even from moderate political quarters. Armin Laschet, state premier of North Rhine-Westphalia, Germany's most populous state,  is an opponent of strict lockdown measures. He is seeking to capitalize on the crisis in his bid to become the new chairman of Angela Merkel's Christian Democratic Union (CDU) party. On prime-time television he accused virologists of changing their minds every few days.

Along with slurs and ridicule and the online trolls came death threats.

On May 26, the Social Democratic (SPD) lawmaker and epidemiologist Karl Lauterbach posted a photo on Twitter. It showed a brown parcel addressed to him at the German Parliament. Inside, he found a small bottle of liquid labeled "positive." "Drink this — it will make you immune," read the accompanying anonymous note.

Within an hour, virologist Drosten tweeted that he, too, had been sent an identical package.

Then Lauterbach received a second threat: A postcard with a cross, his name and the instruction to take care of his family.

The perpetrators are still unknown.

"The task at hand, however, is for society as a whole," the BKA told DW in an email. "Education and prevention are important in order to prevent radical ideas from arising in the first place. We need cooperation in which everyone stands for fundamental rights and an open society."

Already in April,in an interview with the UK daily The Guardian, Drosten had spoken of the death threats which he had passed on to police.

"For many Germans, I'm the evil guy who is crippling the economy," he said.

Drosten's story prompted Jeremy Farrar, the director of the Wellcome Trust and a member of the UK's Scientific Advisory Group for Emergencies (SAGE), to tweet in "solidarity": "Many of us have received such threats.”

While many US voters consider the 79-year-old a voice of reason in the Trump administration, it's Fauci's staunch advocacy of social distancing measures and comments, which are often at odds with those of President Donald Trump, that have made him an object of hate for others. Right-wing radicals claim that Fauci's goal is to stop Trump's re-election in this year's presidential election.

Criticism from Republican senators — eager to revive the flailing US economy — has also lent a hand in giving a voice to the US conservative base, which claims Fauci doesn't have the country's best interests in mind.

Michael Lühmann, from the Götting Institute for Democracy Research, says it is important that the process logic of science is better understood.

"Debates, arguments, disputes are part of science, and are part of the search for knowledge," he told DW. "Science should always endeavor to translate knowledge in society."

"This doesn't mean that science should automatically provide political guidelines. The deductions are still reserved for social discourse and political translation. All the same, science should not be afraid to make recommendations that can be derived from scientific knowledge."

But if campaigns and attacks are carried out, as in the case of virologists, with the sole aim of discrediting scientists, then they should be rejected and scientists should fight together, Lühmann says.

"In this context, solidarity is not just a word, but also a strategy against such attacks."

One of Germany's top virologists, Christian Drosten, says the country could avoid a second wave of coronavirus infections. With more known about the virus, it may be possible to keep COVID-19 limited to local flare-ups. (29.05.2020)

Doctors in Germany are seeing a dramatic drop in patients with serious health conditions seeking medical help, for fear of contracting COVID-19 in the clinics. This could have a serious, long-term impact. (26.05.2020)