Berlin authorities have banned a rally of the coronavirus conspiracy theorist Attila Hildmann. The vegan chef claims Adolf Hitler was a "blessing" compared to Angela Merkel, accusing her of preparing a global genocide. 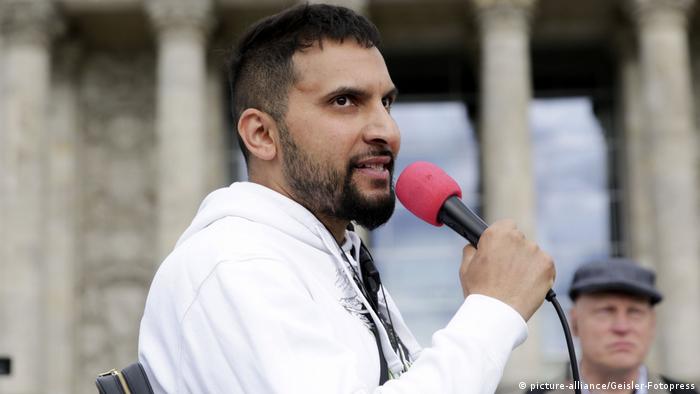 A rally by the self-described "ultra-right-winger" Attila Hildmann was canceled by the city of Berlin's interior ministry on Thursday. The officials said several investigations had been launched over the statements made at the latest Hildmann rally on Saturday, including probes into suspected insults, threats as well as incitement to disorder and illegal acts.

The new rally, originally set for the coming weekend, would likely lead to the utterance of "[criminally] punishable statements once again," Berlin officials said.

The 39-year-old Hildmann had been making appearances in the German media as a vegan chef and cookbook author. In recent months, however, he drew attention for spreading conspiracy theories on the coronavirus pandemic, including allegations that a "genocide" was being prepared under the guise of vaccination. He also spoke at the "Hygiene Demonstrations" directed against social distancing.

Hildmann believes Chancellor Angela Merkel, the daughter of a protestant pastor, to be Jewish and a leader of a "Zionist regime" involved with "the new axis of evil." The chef, who has a Turkish background, denies being an anti-Semite but claims that certain Jewish families work to destroy Germany and the "German race."

He has recently called for a "blitzkrieg" against toy manufacturer Playmobil over an animated video where toys explain the pandemic and face masks.

At the Berlin rally last Saturday, he accused Merkel and US billionaire Bill Gates of using the coronavirus crisis to launch a genocide campaign.

"Hitler was a blessing compared to the communist Merkel, because she is planning a global genocide of 7 billion people with Gates," he told the crowd of some 200 supporters.

He has also described face masks as "slave masks" and decried his opponents as "leftist fascists."

Commenting on the Thursday ban, Berlin's Interior Minister Andreas Geisel said he was happy about the decision to "draw clear borders" on public behavior.

"The right of assembly and freedom of opinion is very highly valued in our democracy," Geisel said. "But the state will decisively stand up to anyone who takes advantage of it to make possibly illegal statements and trample on other people's dignity."

German public broadcasters found that an IT specialist in the Berlin prosecutor's office passed notorious conspiracy theorist Attila Hildmann confidential information about an ongoing criminal case against him.

Hundreds were arrested in Berlin after opponents of coronavirus restrictions marched through the city and defied the police orders to disperse. Authorities said the protesters violated court orders on health and safety.

Thousands turn out in Berlin to protest coronavirus measures 29.08.2020

Berlin authorities estimate that some 30,000 people attended the latest coronavirus skeptic demo. While most of the day was peaceful, hundreds of people attempted to storm the Reichstag parliament building.