People in Berlin and Stuttgart took to the streets to protest against a loss of freedoms amid the coronavirus pandemic. Despite the demonstrations, most Germans back restrictions aimed at curbing the spread of COVID-19. 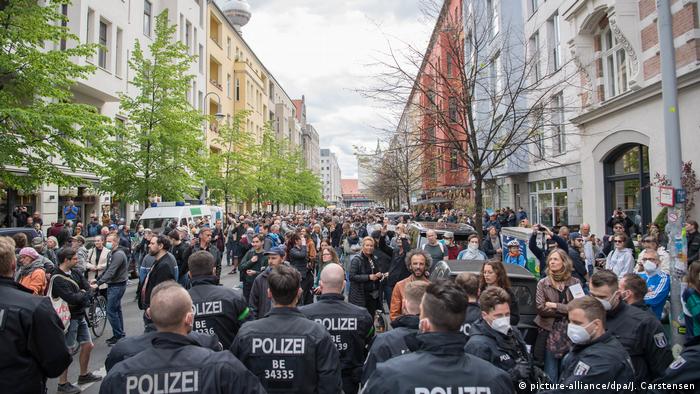 Hundreds of people took part in demonstrations in the cities of Berlin and Stuttgart on Saturday against government measures introduced to protect the country from coronavirus.

Around 1,000 protesters gathered in the German capital at the Volksbühne theater near the city center. Protesters shouted "I want my life back" and held up signs with slogans such as "Protect constitutional rights."

The protests come as a poll last week (link) showed that a wide majority of Germans, 81%, said their government was doing enough to fight the coronavirus pandemic.

Even as 55% of Germans backed plans to gradually begin easing the lockdown, only 13% wanted to go further with reopening the country.

The protesters handed out newspapers questioning the need for lockdown measures and claiming the coronavirus is an attempt to seize power by spreading fear. Police spokesman Thilo Cablitz said permission was granted to distribute the newspaper, but that health authorities had not approved the gathering itself.

"During coronavirus times and according to containment regulations, we are obliged to prevent a gathering," Cablitz said.

Police, who cordoned off the square directly in front of the building in an effort to prevent crowding, used megaphones to call on attendees to disperse and said they arrested more than 100 people.

It was the fourth consecutive Saturday of protests in Berlin. Police said they deployed 180 officers to respond to the latest gathering. Participants have included well-known far-right populists and conspiracy theorists.

In the southwestern city of Stuttgart, between 350 and 500 people answered a call to protest by the group "Querdenken." Its leader, Michael Ballweg, said the demonstration was in support of basic rights such as freedom of assembly and freedom of religion. The gathering had initially been banned before it was allowed to go ahead by the Federal Constitutional Court.

Germany has implemented a range of social distancing measures to curb the spread of COVID-19, which has killed more than 5,800 people in the country. Gatherings are to be limited to no more than two people, bars and restaurants closed and schools shut.

Read more: Coronavirus and Germany: Why the world is looking to Angela Merkel

States across the country began lifting some of those restrictions this week as the rate of new infections has declined, including a partial re-opening of schools and the re-opening nonessential shops under 800 square meters (8,600 square feet), car dealers, and book and bike stores. Starting on Monday, most states will require masks on public transit and while shopping.