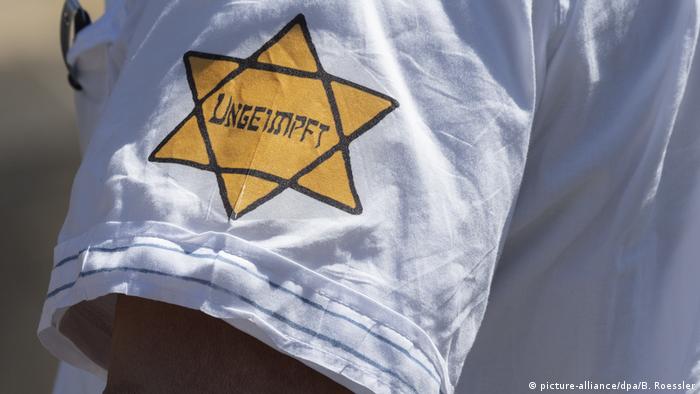 The city of Munich banned the use of Nazi-era Stars of David at coronavirus protests on Sunday after participants were seen wearing them in recent weeks.

Several protesters in cities across Germany have started wearing six pointed, yellow stars with the word "unvaccinated" emblazoned on them. From the color to the font, they're nearly identical to the badges Jewish people were forced to wear across Nazi-occupied territories during the Holocaust.

Other anti-lockdown protesters have also dressed up in striped prisoner uniforms — drawing comparison to concentration camp prisoners — and held up signs reading: "Masks will set you free" or "Vaccination will set you free." 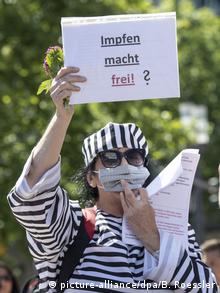 The slogans reference the "Arbeit macht frei" ("Work will set you free") signs that hung above several concentration camps, where millions of Jews were killed during the Holocaust.

Demonstrators are using the highly questionable protest tactics to voice their opposition to mandatory coronavirus vaccines — despite the fact that the German government has repeatedly said it will not implement such a program.

Felix Klein, Germany's commissioner for the fight against anti-Semitism, said that wearing the altered Jewish stars was a "calculated breaking of a taboo," reported local public broadcaster Bayerische Rundfunk.

The tactic has been used increasingly in protests in Germany, Klein said. In using symbols of the Holocaust to provoke at protests, he added, the demonstrators downplay the victims and their suffering.

Other politicians have called for more cities and states to also ban the use of Nazi-era stars at protests and to label them as a form of incitement.

Rüdiger Erben, a Social Democrat lawmaker in the state parliament of Saxony-Anhalt, said that the symbols have also appeared at protests in his state and that they have nothing to do with freedom of speech or freedom of assembly.

Whoever puts on one of the stars is acting "as an anti-Semite of the most repulsive kind," Erben told news agency epd.

Protesters have been gathering for weeks in cities across Germany to demonstrate against the government's restrictions to stem the spread of COVID-19.

Although participant numbers are starting to dwindle, politicians and analysts have grown increasingly concerned about right-wing extremist radicalization at the demonstrations.