Weekend protests against government coronavirus measures were more subdued than in previous weeks, with only scattered demonstrations in Berlin, and rallies in the south washed out by rain. 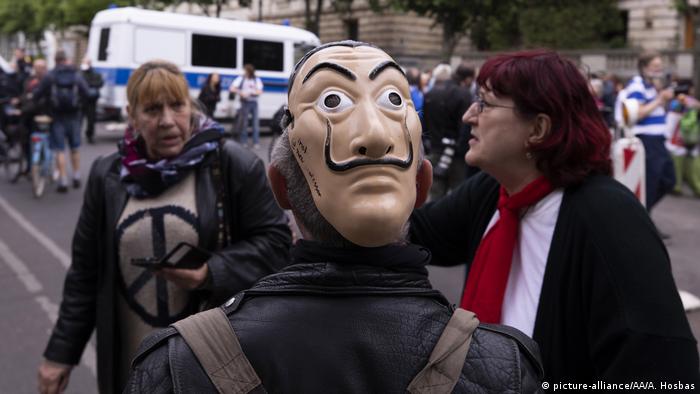 Protests against coronavirus restrictions in several German cities had a far lower turnout Saturday than organizers had planned.

Thousands of people have taken to the streets of German cities in recent weeks in protest against lockdown measures they argue violate their constitutional rights.

Officials say conspiracy theorists and right-wing groups have also taken advantage of the public unrest and attached themselves to demonstrations.

In the capital, Berlin, 1,100 police officers were deployed Saturday in preparation for heavy numbers of people attending around 40 demonstrations that were registered.

However, police reported only scattered demonstrations that didn't number more than a hundred people.

A later demonstration at the location organized by the right-wing "Reichsburger" movement was abandoned by the organizers after 100 people turned up, with only 50 having been permitted under Berlin's regulations.

Elsewhere in the city, a protest planned at the Alexanderplatz square against "forced immunization" did not draw any recognizable participants, according to a DPA press agency reporter. An unauthorized protest two weeks ago at Alexanderplatz drew more than 1,200 people.

Television chef and coronavirus conspiracy theorist Attila Hildmann was temporarily arrested while on his way to the chancellery after a group of 100 people started to gather and follow him in Berlin's central Lustgarten park. Police said he appeared to be leading the people in a march, which is not permitted.

Rained out in Munich and Stuttgart

Numbers were also down at rallies elsewhere in Germany. In the southern cities of Stuttgart and Munich, the protests were washed out by heavy rain.

In Stuttgart, only several dozen people out of 500 registered showed up for a protest. The week before, 5,000 people had gathered for demonstrations.

In Munich, organizers canceled a demonstration planned for 1,000 people due to the bad weather.

In the northern city of Hamburg, police said they deployed a water cannon to break up an unauthorized counter-demonstration of around 120 people on the sidelines of a protest that had drawn around 750 participants.

In the western city of Essen, only 360 of 1,000 registered participants showed up for a protest. And in Cologne, about 250 people formed a human chain, about half the expected attendance.