Coronavirus: How do I recognize a conspiracy theory? | Science | In-depth reporting on science and technology | DW | 19.05.2020 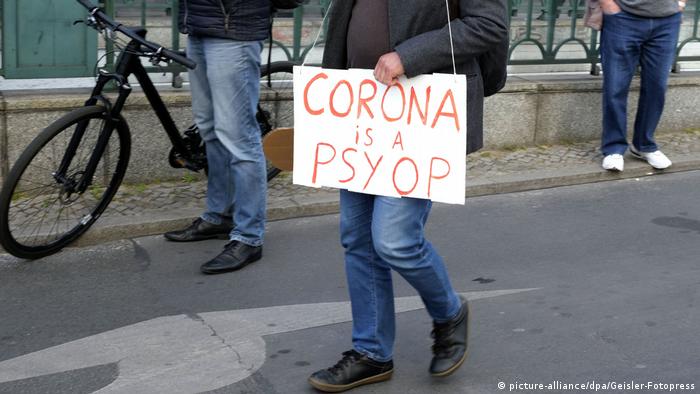 We are in the midst of a crisis. Not only a health and economic crisis, but also a psychological one. Coronavirus, the resulting COVID-19 respiratory illness, and the measures taken to contain the pandemic have turned the lives of millions of people upside down. Although the consequences of all of this have very different impacts on each one of us, there is one thing that unites us all: uncertainty.

People don't like uncertainty. They want to know what happens next and why, and if everything should be done differently.

This is why conspiracy theories come to life in crises — because they offer simple explanations for chaos and seemingly bottomless uncertainty. At a time when normality feels further and further from our everyday, it is particularly tempting for many people to embrace a narrative that centers on a villain.

When is a theory a conspiracy theory?

In reality, simple questions are often not so easy to answer. There is no scientific consensus on what constitutes a conspiracy theory, says social and legal psychologist Roland Imhoff from the Johannes Gutenberg University of Mainz in southwest Germany, who researches conspiracy theories. "Some people assume that a conspiracy theory is equivalent to an inaccurate assumption that does not represent reality."

But Imhoff is convinced that this understanding does not help either research or public communication. He suggests removing the judgement, i.e. whether the argument is actually true or false, from the definition.

"To me, a conspiracy theory is the assumption that an event of some magnitude is causally linked to the secret plan of a few individuals who seek to benefit at the expense of the public," he told DW.

Sometimes, a conspiracy is the most plausible explanation for what happened — such as the well-documented fabrication of the antisemitic text, the "Protocols of the Elders of Zion," from the early 20th century. Written during the Russian Empire, probably by the tsarist secret service, it alleges a Jewish plan for global domination. This anti-Semitic conspiracy was later used by Adolf Hitler as a justification for the Holocaust.

Read more: Opinion: Not all coronavirus critics are conspiracy theorists

In order to be able to recognize the accuracy of a conspiracy theory, we must apply scientific standards. "In science there are rarely absolute truths, but only plausibilities and empirical confirmations of varying degrees," says Imhoff. And most conspiracy theories are extremely implausible.

The first point of confirmation is to check the source. Who says what, when and where? Is it CNN, The Guardian and Deutsche Welle? Or is it someone on YouTube, maybe even with a doctorate, but without any scientific publication worth mentioning?

"If every YouTube video is as trustworthy as a daily newspaper with long term editors, then we say goodbye to creating a communicative agreement about reality as a society," says Imhoff.

To be able to recognize a conspiracy narrative, it is also helpful to understand its function, says Imhoff.

"The function of a conspiracy theory is to rise above coincidence," he says. We like that, because "people are generally very averse to coincidences" because they deprive us of any predictability and control.

"In a conspiracy theory, there are no coincidences; instead, everything is somehow intertwined with everything else," says Imhoff. Conspiracy theorists often get carried away in their argumentation. Imhoff gives an example: "Jens Spahn was in the Leadership Program, which is financed by a bank where the grand-cousin of an uncle of a woman who used to work for Bill Gates is working."

In this way, causality is far from being established, but that does not matter. Followers of conspiracy theories often have no problem with logical contradictions, Imhoff knows from research.

"The same people who believe that Lady Di was killed by the British secret service also believe that Lady Di lives on a desert island because she wanted to escape the hustle and bustle," says the psychologist. The narrative itself is not that important (and what happened to Lady Di is not important either), what is important is the belief that those in positions of power are lying to us. 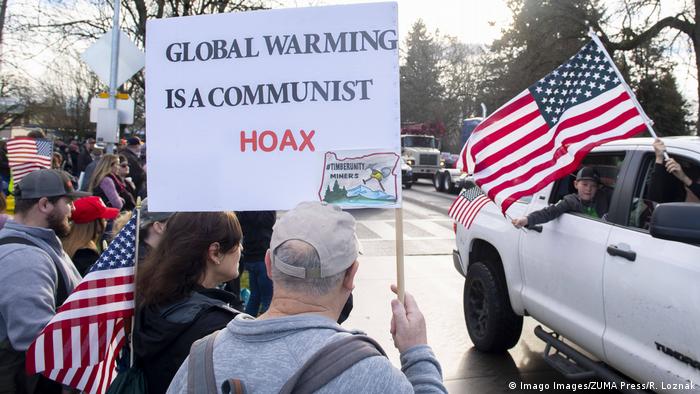 For many, it feels good to claim "I know the truth!"

Imhoff calls the following "a simple rhetorical trick of a conspiracy theory": When I point out who benefits from a circumstance, I am simultaneously providing evidence that the profiteer is also causally responsible for the circumstance.

"Of course, that's not a good argument in epistemology. Just because I'm a farmer profiting from the rain doesn't mean I made the rain." Conspiracy theories always deliver more than the official report on a situation. More explanation, more evidence of coincidences, which — because they are so numerous — can no longer be coincidences, and more truth.

What's the use of conspiring?

However, attaching conspiracy narratives has little to do with critical questioning and investigative research — even if the followers like to claim that they do. "The really critical investigative searching and checking of sources would require that you do it symmetrically," says Imhoff.  Then not only would the mainstream media be critically scrutinized, but Professor X's background, including the YouTube channel, would also be checked.

It's worth checking whether producers of conspiracy narratives, who like to stage themselves as courageous underdogs who like to stand up and (finally!) tell the truth, have a political or economic agenda.

The US radio show host and conspiracy theorist Alex Jones, for example, not only spreads conspiracy theories with his company Infowars, but also sells nutrition supplements, security technology and survival equipment in the affiliated store, thus conveniently making the purported end of the world a lucrative business.

Spreading and creating conspiracy theories also tends to inflate one's self-confidence. "The feeling of having exclusive knowledge and being able to rise above the naive masses is another reason for the popularity of conspiracy theories," says Imhoff.

Am I falling for a conspiracy theory?

Research shows that people tend to develop conspiracy theories especially when they feel they are losing control of their lives. In an increasingly complex world, the feeling of a loss of control isn't just for the underprivileged, but is felt by many wealthy and seemingly well-educated people, too. The desire for security unites us all.

This is accompanied by an inability to question oneself, which would ultimately mean the loss of security. "People are designed to always look for reassurance," says Imhoff. Here, people could learn something from scientists by questioning the validity of claims before throwing their weight behind them.

How do I stand up to conspiracy theories?

But what if the protest against the vaccination dictatorship, abolition of basic rights and lying mainstream media is suddenly not just on your Facebook timeline, but sitting at your own kitchen dinner table? What kind of dialogue can there still be when logic no longer counts, causality is not distinguished from correlation and the press, of course, only tells lies?

Roland Imhoff recalls here the function of a conspiracy theory: it satisfies the need for control over our own lives, for security and predictability. "In dialogue with close friends or family members, it is important to take these needs, which underlie the desire for explanations, seriously," he says, but without taking seriously the resulting enthusiasm for conspiracy narratives.

Absolute security and control can only be found in our dreams of an illusory world of cotton candy and daisies anyway. Even the best conspiracy theory won't change that.

Coronavirus crisis: Children suffer most from being locked down

During the coronavirus crisis, children have been seen as potential virus carriers or obstacles to parents working from home. But some little ones will suffer the most during this time. (29.04.2020)

How the novel coronavirus attacks our entire body

COVID-19 is known primarily as a respiratory illness. However, the aggressive pathogen SARS-CoV-2 attacks not only the lungs but also the heart, nerves, brain, vessels, kidneys and skin. (11.05.2020)

The novel coronavirus could indirectly result in many more victims. That's because the fight against "classic" infectious diseases, like measles, TB, HIV and malaria, is in danger of falling behind. (13.05.2020)

Can COVID-19 be treated with UV radiation?

Do not swallow disinfectant