How are Germany′s coronavirus protests different? | Germany | News and in-depth reporting from Berlin and beyond | DW | 14.05.2020

Vaccination opponents, conspiracy theorists and activists with drastically different political views have been protesting Germany's pandemic measures. Outside Germany this show of unity is rare — except for in the US.

Anti-Asian racism on the rise in Germany

Earlier this month, some 400 people turned up to demonstrate in front of the chancellery against the government's measures to curb the spread of COVID-19. According to various media reports, they accused lawmakers of triggering panic and of supposedly wanting to force vaccinations on people.

But this wasn't in Berlin — it was in front of the Austrian chancellery in Vienna. The demonstration took place on May 1, with Austrian newspaper Der Standard reporting it was the second of its kind. The leader of Austria's Identitarian movement, Martin Sellner, was also in attendance.

The Initiative for Evidence-Based Corona Information, which organized the protests, was expected to show up for another demonstration in Vienna for May 14.

The Vienna protest is one of the few examples outside Germany where people — who wouldn't have much in common were it not for COVID-19 — are forming an unlikely alliance. These demonstrations have drawn people from across the spectrum: conspiracy theorists, anti-democracy activists, those who are against vaccinations and opponents of 5G mobile networks, among others.

Protests all over the world

Other countries have seen demonstrations against measures introduced to curb the spread of COVID-19, but they've largely been of a different kind. In Poland, people who commute across the border for work joined hoteliers in the streets to call for a return of freedom of movement in the EU. And in Warsaw last weekend, police carried out arrests during a protest calling for the economy to be reopened.

Last month, several days of unrest were triggered in the working-class suburbs of Paris after a motorcyclist was injured in a collision with a police car door. Eyewitnesses have alleged that police had opened the door deliberately, a charge the police have denied, leading protesters to riot against police violence and the social disparities highlighted by the lockdown measures. An investigation is underway.

Read more: When will the second wave of infections hit?

In the Slovenian capital, Ljubljana, and other major cities, thousands took to their bikes last week to protest Prime Minister Janez Jansa's government by ringing their bells. They accused the government of misappropriating funds in the procurement of personal protective equipment. 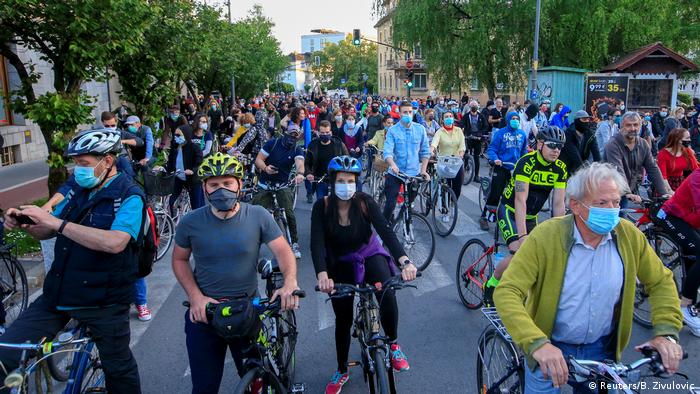 Though protests in other countries may have seen some conspiracy theorists on the fringes, they seem to be less vocal and numerous than those joining the demonstrations in Germany. In London, for example, an anti-lockdown protest in early May joined by some anti-5G demonstrators only attracted about 40-odd people.

In Germany, political scientists conducting research into the most recent protests have drawn comparisons with the Vigils for Peace that were triggered by the pro-Russian unrest in Ukraine in 2014. Though they began as a protest movement for peace, the events soon attracted people with an anti-US worldview and others with far-right tendencies, anti-Semites and conspiracy theorists.

"The way in which protest is expressed can be viewed from a German cultural perspective," said Jan Rathje, an expert on anti-Semitism and conspiracy theories at the Amadeu Antonio Foundation in Berlin. "As in 2014, there is a rapprochement between people who would describe themselves as being on the left and others who are right wing or even far right. They are coming together against 'those in charge,' against the 'great conspiracy' that they are trying to avert and resist."

Parallels between US, Germany

Increasingly, German right-wing extremists and conspiracy theorists are communicating with like-minded people in other countries. This was the case for Stefan B., who introduced himself as "Anon" in a video he made and posted online before going out on a rampage and attempting to attack a Halle synagogue in October 2019. When he was unable to enter the building and kill as many Jewish worshippers as possible, he shot dead a passerby before going into a kebab shop where he killed a customer. Two more people were injured as he tried to escape.

Anon has become a code for right-wing extremists on social media. In 2017, a supposed high-ranking US official claimed to have Q clearance — access to classified information involving the US government and its opponents — and made allegations of conspiracies involving US government agencies. QAnon has since developed into a far-right conspiracy theory focused on the belief that President Donald Trump is fighting a secret campaign against a child sex trafficking ring and members of the "deep state," including former President Barack Obama, former US Secretary of State Hillary Clinton and the billionaire philanthropist George Soros, which QAnon has accused of planning a coup. 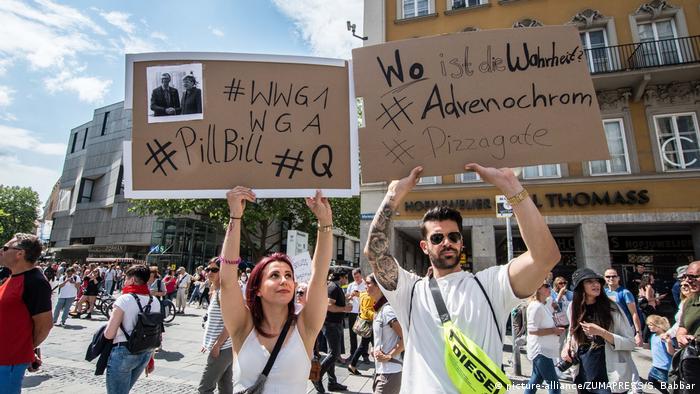 Followers of the movement see Trump as a liberator, and often hold up Q signs and posters at public events. These have also been seen at recent protests against lockdowns to curb the spread of COVID-19 in the US, where armed libertarians were out en masse. According to Rathje, this development in the US was nothing new. "We've seen these armed militias occupying buildings in the past," he said.

The difference between the situation in the US and Germany, he said, was that in the US individualistic libertarians tend to be at the forefront of the protests, whereas in Germany there's an element of "national community" at play. What the protesters all shared was the "idea that there is a big majority and a small minority, which is conspiring to control and manipulate the majority," he said.

To support their worldview, conspiracy theorists often post edited videos of protests on YouTube. Opting for solemn soundtracks, they take footage of various protests in the US, Canada and Germany — along with material from Slovenia, Poland, Lebanon and Hong Kong, for example, deceptively stringing them together in such a way to make it seem that everyone is involved in the "great global awakening."

In 2015, conspiracists feared refugees were taking over. Today they see dark global forces gaining power amid a global pandemic. Alexander Görlach asks: What happens when society can no longer agree on basic facts? (13.05.2020)

Illegal immigrants fear nothing more than deportation. Now the COVID-19 pandemic adds to those fears, as they are forced to register to get medical care. (13.05.2020)