A new wave of protests gripped Germany as thousands rallied against coronavirus restrictions. At a separate event in Warsaw, police used tear gas to break up the crowd, while 19 people were arrested in London. 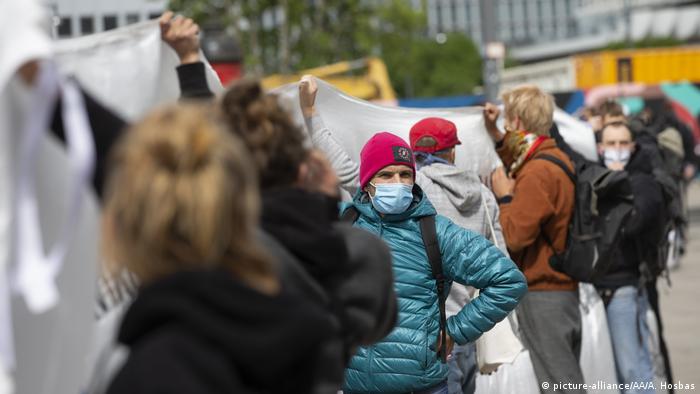 German police detained 200 people in Berlin as several parallel protests were held in the city on Saturday, with some of the protesters rallying against anti-infection measures and others decrying conspiracy theories.

Rival events were also held in Frankfurt, where about 1,500 people gathered to protest the government measures and about the same number of joining a counter-protest, police said.

In Stuttgart, 5,000 people gathered at the designated protest area where they were required to stay 2.5 meters (8.2 feet) from one another, and the authorities were forced to redirect many more to a different area in order to maintain the required distance.

One Stuttgart protester held up a sign "Coronavirus is fake" while another referenced a conspiracy theory about US tech billionaire Bill Gates, which claims Gates is manipulating the pandemic to control the world. "Don't give Bill Gates a chance," the placard read.

At a separate protest in Poland, police fired tear gas and used force to break up a rally in Warsaw. Hundreds of participants had called the government to lift restrictions on businesses, displaying signs such as "Work and bread" and "It will be normal again."

The authorities noted "cases of aggression towards police" which prompted a violent response. While the protesters insisted the event was not linked with political parties, opposition senator Jacek Bury said he was detained by the police. The police disputed his account, saying that the lawmaker entered a police vehicle on his own accord and then refused to leave.

A smaller event in London prompted police to arrest 19 people who gathered to protest social distancing rules in the city's iconic Hyde Park. Police representative Laurence Taylor described the gathering as "disappointing" and said the group had ignored the calls to disperse.

While some of the protesters reject vaccination and believe the pandemic to be a conspiracy, others oppose what they see as the government attempt to take away basic human rights under the guise of fighting the infection.

In Munich, a protester said that wearing masks and social distancing was "simply no longer necessary."

"COVID-19 is a serious disease that must be taken seriously, but the consequences of the disease must be compared to the negative consequences that these measures may have" 43-year-old Markus Windebrandt was quoted as saying by the AFP news agency. "There is no medical evidence that wearing the mask works," he added.

In the eastern city of Halle, police intervened after protesters verbally abused a camera crew working for the public broadcaster ZDF. At least three different camera crews have been physically assaulted since the protests escalated earlier this month.

Germany's federal police warned that right-wing extremists were attempting to "instrumentalize the current situation for their propaganda purposes." However, the authorities had no information that the extremists were actively trying to take control of the movement, a police spokeswoman told the Sunday edition of the Frankfurt Allgemeine Zeitung.

New York's governor has said new COVID-19 cases in the state are predominantly a result of the easing of lockdown. In Europe, however, there were protests against restrictions, and arrests. Follow DW for the latest. (16.05.2020)