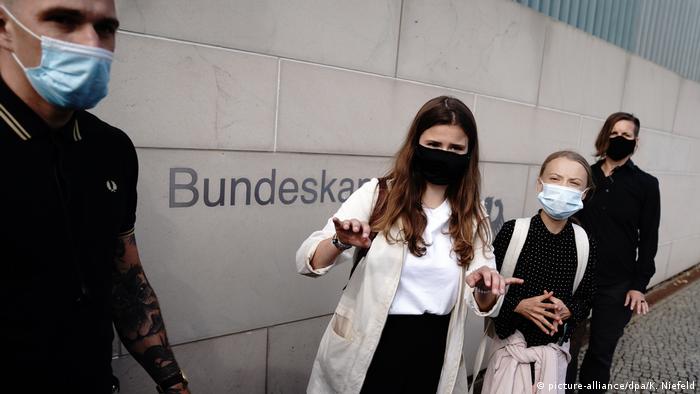 German Chancellor Angela Merkel hosted Fridays for Future youth climate activists, including teenager Greta Thunberg, in Berlin on Thursday. The talks about climate issues marked the second anniversary of the founding of the movement.

Luisa Neubauer from Germany and Belgium's Anuna de Wever and Adelaide Charlier joined the 17-year-old Thunberg for the hour-and-a-half meeting with the Chancellor.

"We asked her to treat the climate crisis like you treat any other crisis," said Thunberg, following the meeting, repeating a key demand in an open letter sent to all EU leaders on July 16.

The activists confirmed they discussed parts of the letter, which demands a halt on fossil fuel investments and subsidies.

Greta also called for Merkel to "be brave" and become a leader in the crisis. The activists said Merkel had told them that she would take this into consideration.

Read more: Fridays for Future: Can they keep the pressure up?

What is Merkel's view?

At the start of July, Germany assumed the rotating EU presidency. The country has vowed to make climate policy a central focus of its tenure.

Merkel did not speak to the press after the discussion. Ahead of the talks, she said she expects "a constructive exchange."

"I think we will have to wait and see which concrete results we take away from it," she added. 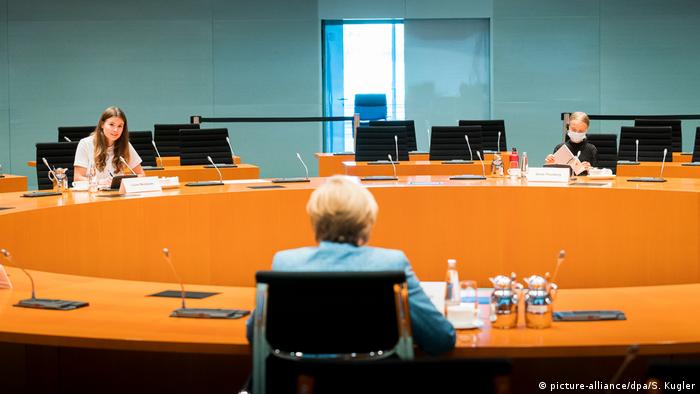 Angela Merkel in the conference room with Neubauer and Thunberg

What did the activists discuss?

Neubauer said that the activists spent "a long time" talking about equipping democracy to meet the challenge of addressing issues surrounding the climate, adding: "We're asking for a lot — we know that."

De Wever said that the coronavirus pandemic had proven what governments can do when faced with a crisis.

They also discussed how to hit the goals of the Paris Agreement that aims to keep the global temperature rising below 2 degrees Celsius above pre-industrial levels.

Climate activism and the private sector

What next for Fridays for Future?

Around 20 supporters greeted the activists outside the chancellery in Berlin. They held signs demanding action from politicians and chanted "you are robbing us of our future" — a phrase from a speech by Thunberg to the UN.

The pandemic put a stop to mass gatherings and protests, forcing the movement online. However, the activists said they were now mobilizing, "planning to strike online or offline" as part of a corona-safe edition of last September's Global Climate Strike. Organizers estimate that the last day of actions saw a global turnout of 7.6 million, including around  270,000 people in Berlin.

This year's event on September 25 will ensure social distancing and a focus on creating powerful imagery rather than attracting large crowds.

Today on the program, we speak with Fridays for Future activist Luisa Neubauer, who reflects on four years in a movement for climate action. California has a new law targeting food wasters, but it's not without a few hurdles. And why is tropical Costa Rica facing water shortages?