Fridays for Future: Climate strikers are back on the streets | Environment | All topics from climate change to conservation | DW | 25.09.2020 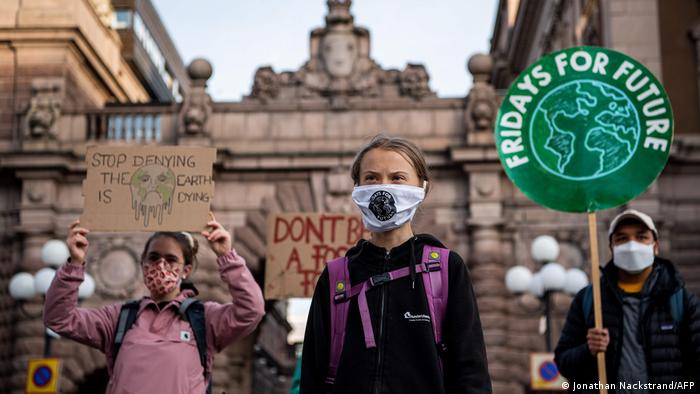 Today they are taking to the streets once more.

The Fridays for Futures movement, which started with activist Greta Thunberg skipping school to sit alone outside the Swedish Parliament in 2018, has become a global youth force calling for climate justice. But a surge in support last year was hobbled after coronavirus lockdowns closed schools and kept children at home.

The protest on Friday is the group's first global action since the pandemic struck and follows meetings between prominent activists and world leaders. Last month, Thunberg and three other climate activists presented German Chancellor Angela Merkel with a letter signed by nearly 125,000 people demanding EU leaders "stop pretending that we can solve the climate and ecological crisis without treating it as a crisis."

They have called for an immediate halt to investments and subsidies in fossil fuels and, in Germany, pressured the government to bring forward its deadline to phase out coal from  2038 to 2030,  and to go carbon-neutral by 2035 instead of 2050. 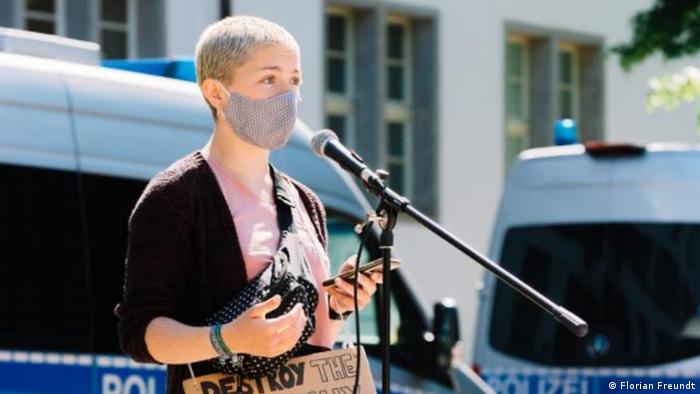 Line Niedeggen, a physics student at the University of Heidelberg and Fridays for Future spokesperson, believes Germany has a responsibility to lead on climate action. Historically it has been one of the world's biggest carbon emitters, she says, is also rich enough to adopt cleaner energy systems, and last month it adopted presidency of the EU Council.

"We have to use this role as the leader of one of the biggest emitters in the world to start a change of direction because, scientifically, 2020 is the last year we can make changes to actually reach 1.5 degrees," Niedeggen told DW.

Last November, the head of the UN Environment Program was among the public and scientific figures to warn that 2020 offered a last chance to cut emissions. Then, few could have suspected this deadline would coincide with an unprecedented public health emergency.

The pandemic has dealt climate activism a blow. Niedeggen says that as a movement demanding that the world act on scientific advice, the school strikers took lockdown restrictions extremely seriously, halted public protests immediately and took their activism online.

On April 24, Fridays for Future organized a "digital strike," with Niedeggen hosting a  that racked up close to a quarter of a million views. "We were not physically standing together, but we were all fighting together," she says. 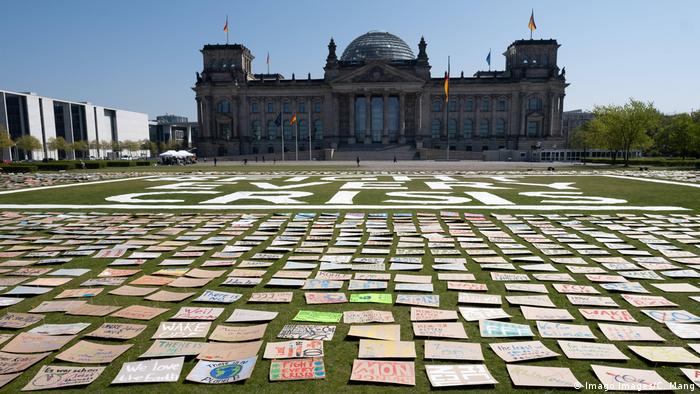 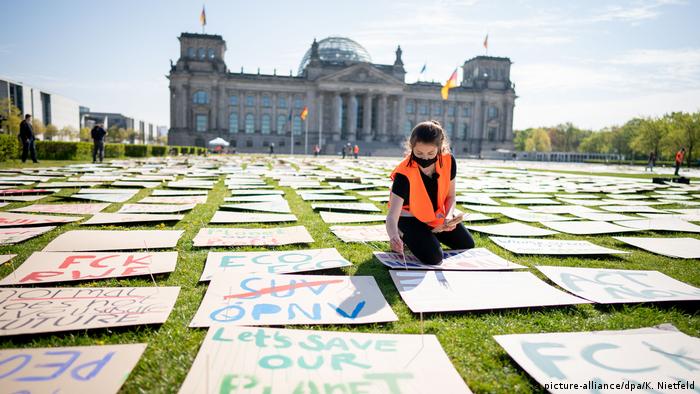 Even in the thick of lockdown, protesters in Germany found a way to be seen and heard

Activists also gathered thousands of placards from across Germany to lay out in front of the German Bundestag around the central slogan: "Fight every crisis."

Still, corona inevitably pushed climate change down the agenda, and according to a poll conducted by Postbank only 6% of German 16 to 18-year-olds joined an online strike, compared to nearly a third who had been to a physical Fridays for Future protest.

Elsewhere in the world, the shift to online activism may have been even more damaging.

Fatou Jeng, a climate activist from Gambia, says that in Africa, school strikes are anyway less effective than they are in Europe, although they have inspired other action. Her own activism has mainly focused on conservation work, planting trees to protect vulnerable coastlines, and educating communities about climate change. 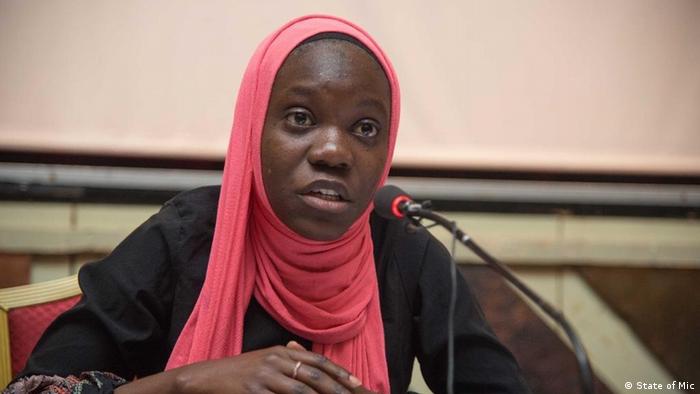 Most of these activities have had to stop as a result of COVID-19, and while Gambian activists have continued to use digital means to pressure those in power, "the provincial areas which are more vulnerable to the impact of climate change don't really have access to the internet," Jeng told DW.

Opportunity for a new normal

Last September's Global Climate Strike drew young and old protestors around the world, with organizers estimating a global turnout of 7.6 million, including an estimated 270,000 people in Berlin. Activists have adjusted this year's event to account for social distancing and different levels of coronavirus restrictions in cities taking part. 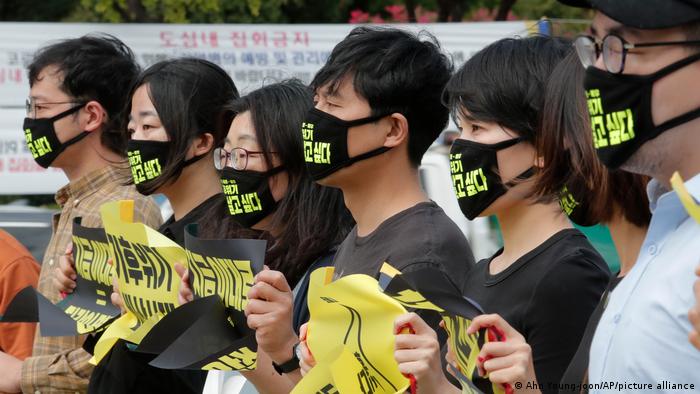 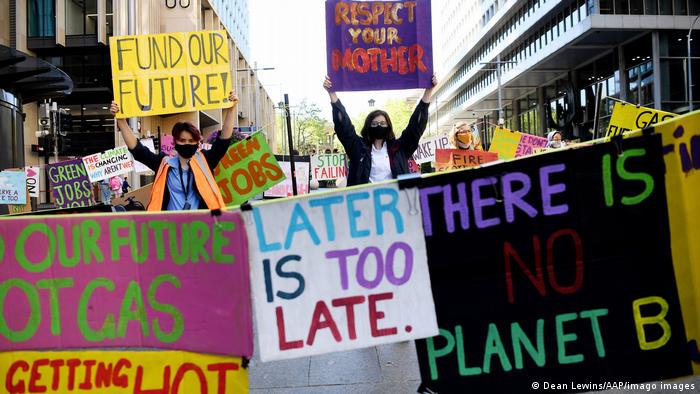 Climate strikers in South Korea (above) and in Sydney

"The pandemic shows that we can change our normal daily life, and we are very able to adjust to a situation of crisis," she says. The key question is how economies get back on their feet: "We have the possibility to build a new normal, to build a renewable world order, and an environmentally just, climate-just normal for everybody."

In July, Jeng was among 20 female Fridays for Future activists from the Global South to sign an open letter to G20 finance ministers warning that their decisions in "exclusive backrooms" over stimulus packages and corporate bailouts would "lock in development pathways for decades."

"The system is not broken, it was built to be unjust. We don't need recovery, we need a reboot," the letter reads, stressing that "black people, indigenous peoples and people of color," have been disproportionately hit by the economic, climate and coronavirus crises.

Figures on stimulus spending do not suggest their words had much impact. The ministers were criticized for failing to relieve the debt of poorer countries, and according to Energy Policy Tracker, G20 countries by August had pledged $169 billion (142 billion euros) to fossil fuels since the beginning of the pandemic.

Katrin Uba, associate professor of political science at Uppsala University in Sweden, is researching Fridays for Future. She says that despite the movement raising awareness and gaining access to policymakers, real policy change "is not there yet."

Still, she stresses that social movements go through waves of mobilization as public attention on their core issues ebbs and flows. And perhaps one of Fridays for Future's biggest achievements is birthing a politically active generation that will keep the fight up long after corona becomes a memory.

"We know clearly from our research that many of the people who came to the streets hadn't done any protesting before in their lives," she told DW. "And we also know that if you do one protest, you are likely to do more."

This article was first published in August and has been updated to include the Global Climate Strike in September.

Known for starting the Fridays for Future climate movement, Greta Thunberg wants to see changes to food production and consumption in a bid to combat a trio of threats facing the world.

German president: Onus is on individuals to end the pandemic 23.12.2021

In his Christmas address, President Frank-Walter Steinmeier has said that responsibility for beating the pandemic lies with each citizen, as well as with the state. He also addressed the devastating German floods.