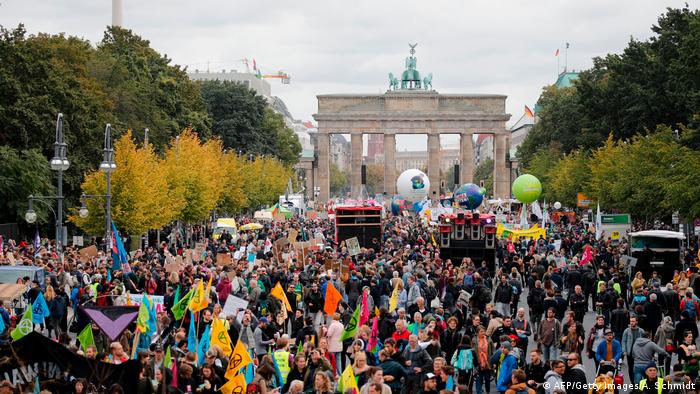 It started with kids skipping school.

But Friday's Global Climate Strike called by Fridays For Future organizers demanding urgent action to save the environment, also had the adults bunking off work.

In a graphic demonstration of urgency, activists stood on melting ice blocks with nooses around their necks.

Even those with the least to lose from climate change turned out to chant and march in the Global Climate Strike.

"People of my generation are fully aware what is happening," said 71-year-old Doris Janning, resting on the kerb before the protest began. "We must do what we can as soon as possible."

Read more - The faces of the Global Climate Strike

Brandishing a sign with the words 'Grandmothers for future,' 69-year-old former schoolteacher Krista Rossmanet said: "When we were younger we went to demonstrations against the deployment of Pershings [missiles] and nuclear power."

"It's wonderful that the older generation can finally join in again." 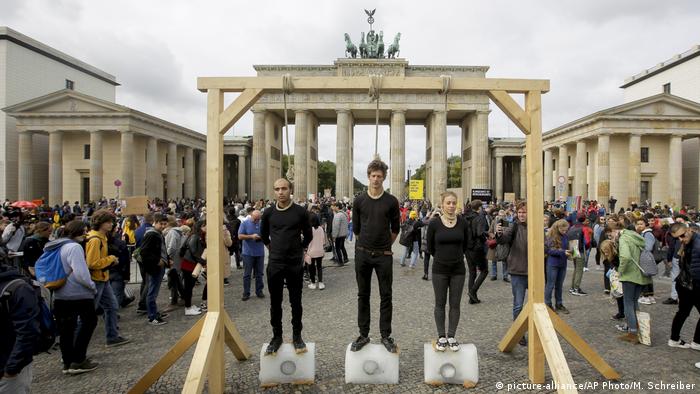 How it all started

The Fridays for Future protest movement, started by Swedish teenage activist Greta Thunberg and taken up by schoolchildren across the world, has become a focal point for young people fearful for their futures. Most are too young to vote — and many frustrated with the pace of progress.

"If you talk to your parents and family, they don't think [climate change] is an issue," said Isaac Tesfaye, a 22-year-old physics student. "The scientific facts are not accepted in general society."

"If adults won't take care of the world, then we have to do something," said 16-year-old Diego Hoffmann.

But some feel their cry is increasingly being heard.

Organizers estimate 270,000 attended the protest, one of thousands happening in cities across the world. The figure has not yet been independently verified. Luisa Neubauer, a senior activist in Germany's Fridays for Future movement, described the protest as "historic" in a tweet.

Addressing a crowd in front of Berlin's Brandenburg Gate, Seawatch captain Carola Rackete said: "We adults are responsible for the fact that the earth is dying… We should not be under the illusion that our individual actions can do anything to turn the situation around."

Schoolchildren chanted that their future was being taken from them. Some, attending with their class, had been allowed to miss school for the protest.

Others had not. One girl carried a sign that read: No photos, please, my teacher thinks I'm sick.

What people are willing to give up

In interviews with DW, many young protestors were quick to cite facts about climate change from the IPCC, a panel of scientists convened by the United Nations to guide governments.

Teenage protestors are not at odds with science, said Christoph Weigel, a biology lecturer at the Technical University of Berlin, who attended the protest with a group called Scientists for Future. "They say listen to the experts. This is something where as a scientist I feel very welcome."

Many added they were making personal sacrifices, but wanted governments to act, too.

"We do everything that is feasible at home: we eat less meat, take public transport," said Anastasia Nganga, a 38-year-old from Kenya attending the strike with her daughter and members of her German class. "But it's still not enough — that is why we are on the streets."

As the protests unfolded, the German government agreed on a €54 billion ($60 billion) package of measures aimed to reduce greenhouse gas emissions. Chancellor Angela Merkel highlighted Greta Thunberg's plea to "unite behind the science."

Fridays for Future Germany criticized the climate package as insufficient.