How successful are international climate efforts? | Environment | All topics from climate change to conservation | DW | 24.09.2020 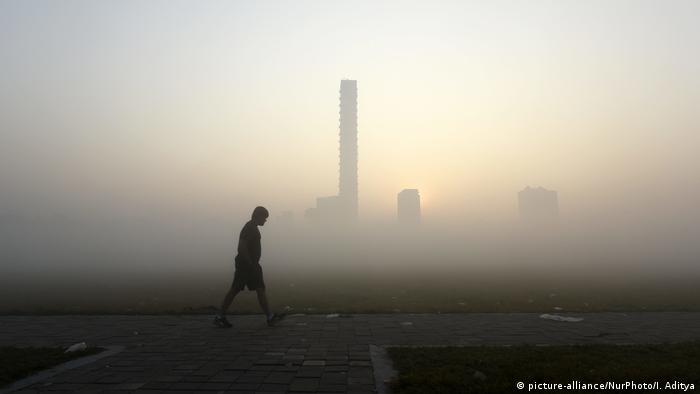 A clock that activists in New York recently turned into a countdown for catastrophic climate change serves as a ticking reminder of how long it will take the Earth to warm by 1.5 degrees Celsius — the level to which world leaders agreed to limit global warming when they met in Paris in 2015.

Government representatives, business leaders and members of climate and environmental protection organizations descended on New York this week to discuss how to better protect the climate. What needs to change, however, is no secret: Humanity must drastically reduce its greenhouse gas emissions.

"Basically, all countries are doing far too little for climate protection," said Niklas Höhne, a climate scientist and co-founder of non-profit NewClimate Institute, which together with research organization Climate Analytics, published a report on Wednesday into the response to the coronavirus crisis. The analysis of its Climate Action Tracker (CAT) found "just a hint of green" in pandemic recovery plans.

"The corona pandemic poses particular challenges to the global community," said Höhne. "Unfortunately, many states are using it as an excuse to abandon their climate protection efforts even further." 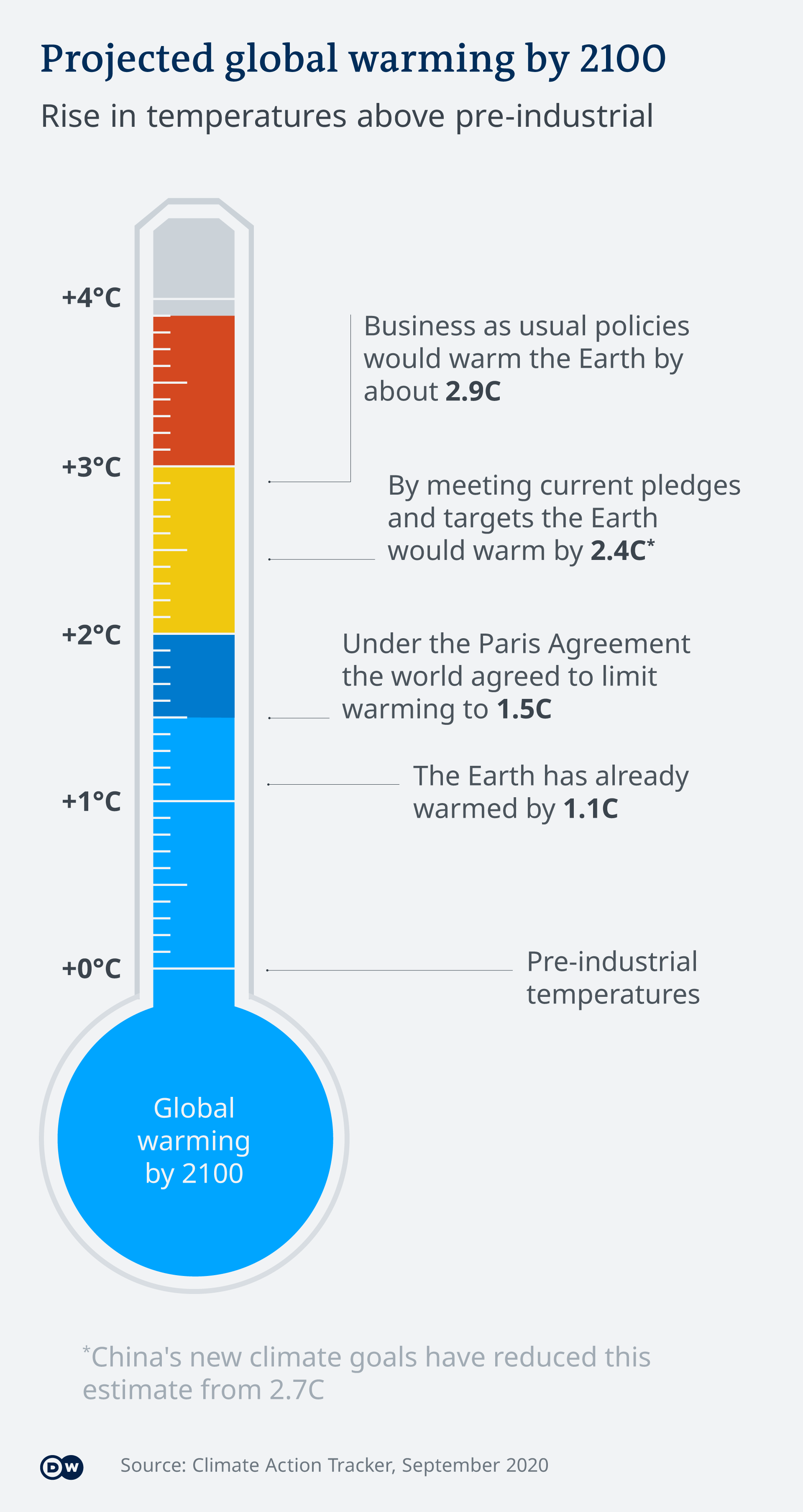 The United States, he said, has made almost no provision for investment in climate or environmental protection in its reconstruction program, and is unconditionally supporting polluting industries like airlines.

Mexico, meanwhile, is cited as using the pandemic as an excuse to stop the expansion of renewable energies and instead promote fossil fuels, while Brazil is doing little to combat rising deforestation and emissions from agriculture. Environmental regulations there are instead being relaxed or even withdrawn.

The report focuses on the investment plans of five countries: China, the US, the EU, India and South Korea. "In addition to the EU, South Korea has deliberately put a green focus on coronavirus aid with its Korean Green New Deal," said Höhne. But it is not yet possible to predict exactly how India's plans will affect the climate.

Until now, China has not looked set to become climate-friendly. But Chinese President Xi Jinping threw predictions into confusion at the UN General Assembly this week when he unveiled plans to strive for CO2 neutrality before 2060.

"This is the most important announcement in global climate policy in at least five years," said Höhne. "If China, which is responsible for a quarter of the world's greenhouse gas emissions, were actually to be CO2-neutral before 2060, this would reduce the forecasts for global warming by around 0.2 to 0.3 degrees Celsius". 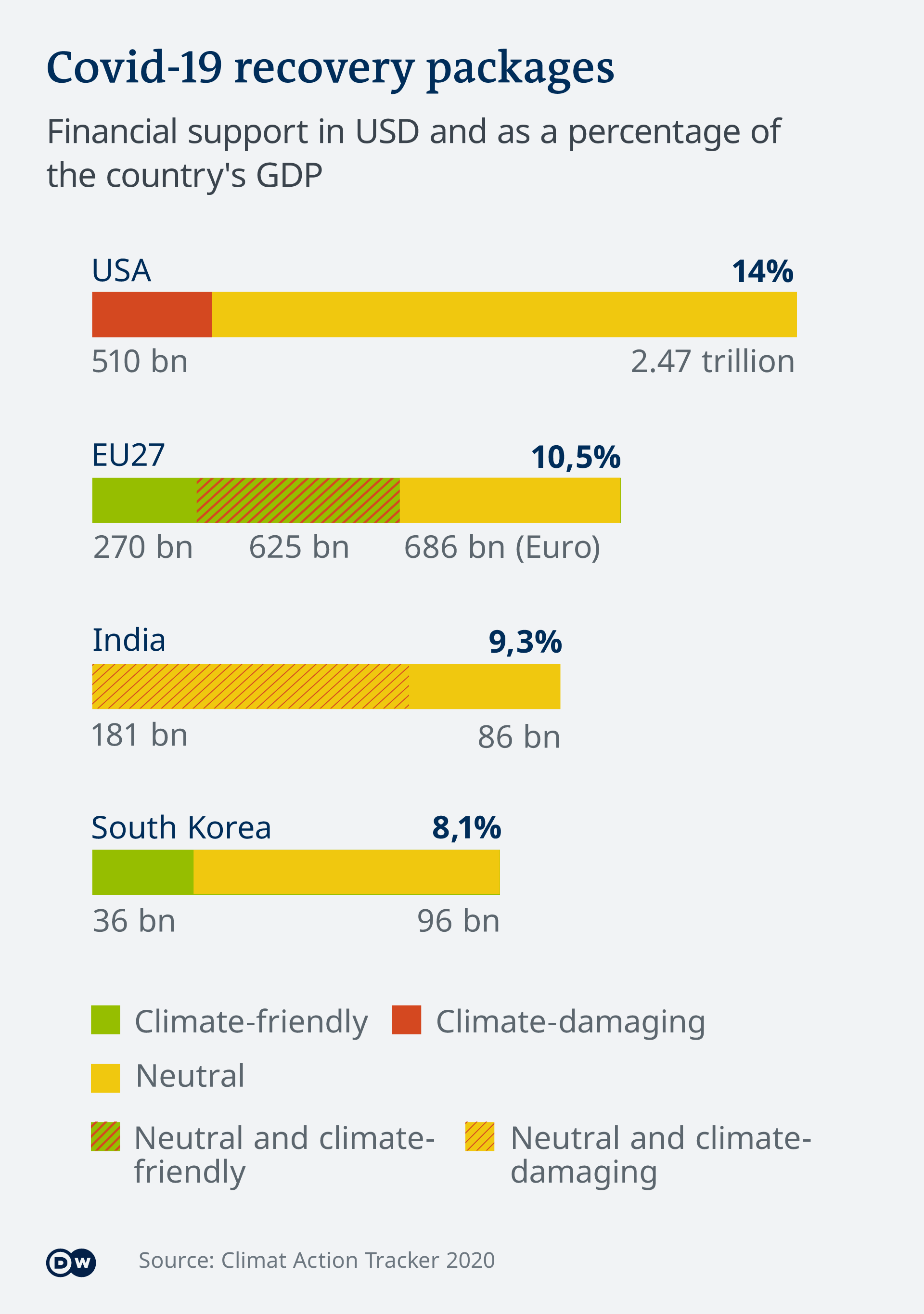 But even with China's new climate protection plans, the Earth will warm by an average of 2.4 to 2.5 degrees Celsius by the end of the century, according to CAT. Even this year's global CO2 emissions, which have fallen by about 5% to 9% due to coronavirus lockdowns, would not change the direction.

Signatories to the 2015 Paris Agreement committed to announce their self-set "ambitious climate targets" for 2030. But so far only 12 countries have done so, according to the CAT.

Smaller countries, such as Chile and Norway, are more ambitious. Rwanda is also setting the pace in climate protection. In May, the East African country became the first on the continent to announce that it would tighten its climate targets and reduce its greenhouse gas emissions by at least 16% by 2030.

"Rwanda is demonstrating the kind of leadership that the world needs right now," said Helen Mountford, vice president for climate and economics at the World Resources Institute, adding that it was "an inspiration for other countries looking to step up their climate action."

Lessons from the crisis

Mountford said the pandemic could have a positive effect in the long-term despite the lack of progress so far. Industrialized countries depend on the global south, for example in food production. To maintain the flow of goods and keep migration movements to a minimum, said Mountford, there is a growing interest in doing more for the well-being of these countries — including limiting negative climate impacts. 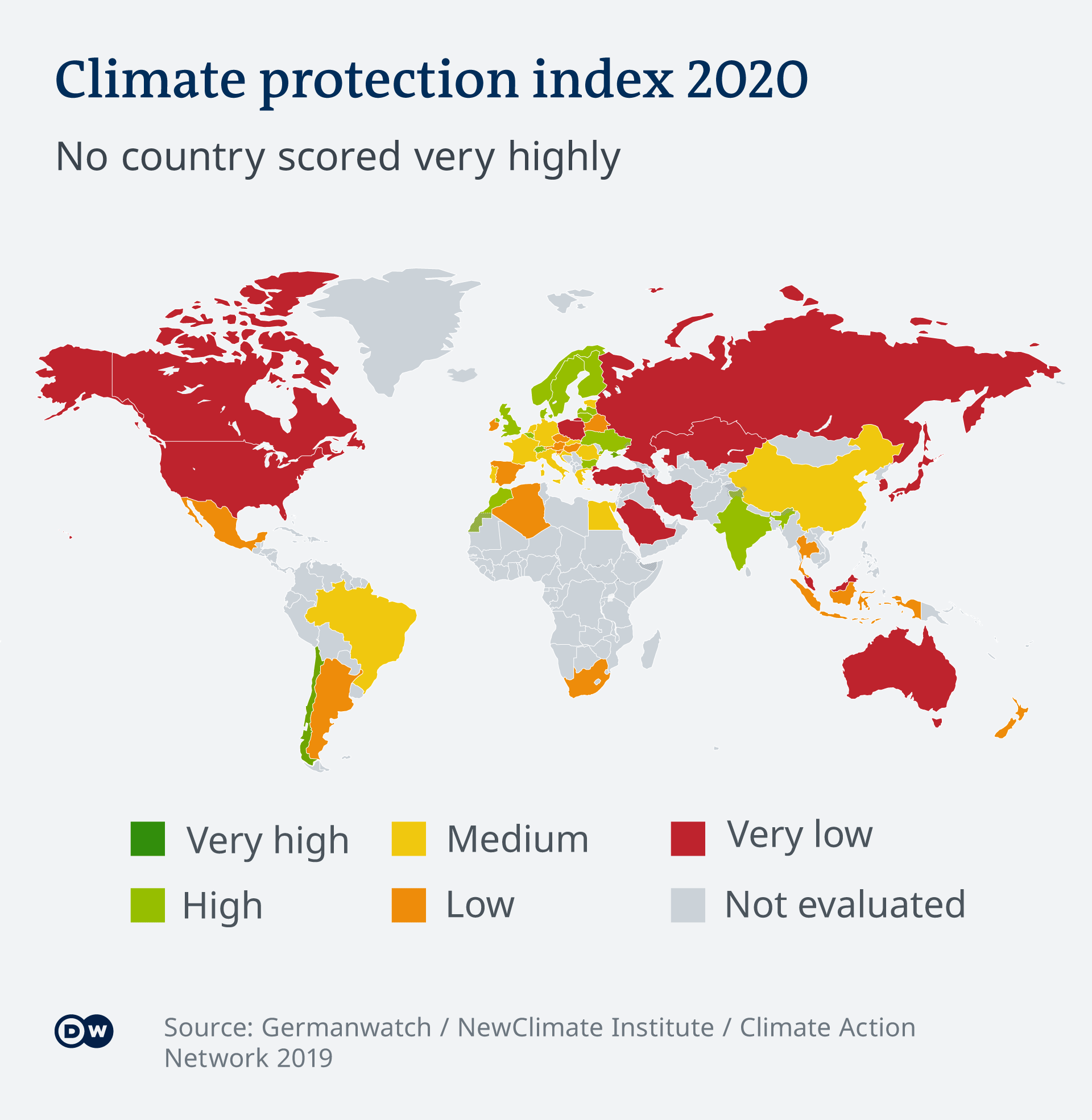 Rixa Schwarz, team leader for international climate policy at the NGO Germanwatch, said the pandemic illustrates the importance of resilience: the ability of societies to deal with crises.

"Lessons must now be learned for the climate crisis and the global community must be made resilient to shocks such as pandemics and climate impacts," Schwarz said.

The Climate Protection Index — published once a year by Germanwatch, NewClimate Institute and the nonprofit Climate Action Network International — shows how far the world is from this goal. No country reaches first to third place because no country is doing enough to avoid dangerous climate change, the authors wrote.

China's announcement should improve its ranking in next year's Climate Protection Index. But there is a long way till 2060. And the clock keeps ticking towards 1.5 degrees Celsius — seven years and almost 100 days.

In the latest example of a wave of climate litigation across the world, six young people this week filed a case to the European Court of Human Rights in Strasbourg, asking for accountability around the climate crisis.