Climate strikers get inventive during the COVID-19 crisis | Environment | All topics from climate change to conservation | DW | 24.04.2020

Climate strikers get inventive during the COVID-19 crisis

Fridays for Future warn the COVID-19 pandemic must not interrupt the fight against the climate crisis. The youth-led movement has called for an online global climate strike on April 24. But it's easier said than done. 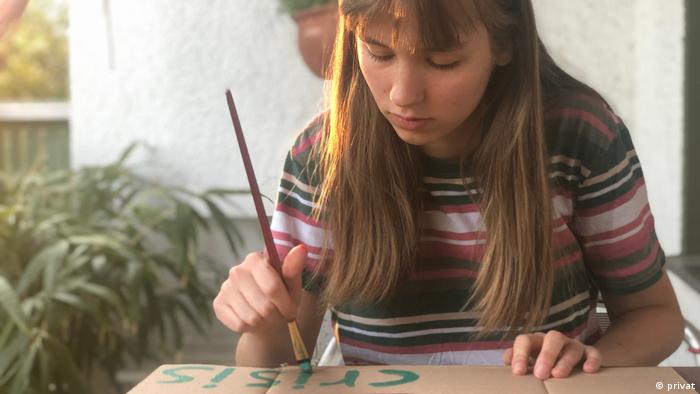 Her laptop open in front of her, Finja Rausch sits on her bed, talking on the phone. She's wearing a "There is no Planet B" t-shirt, and the walls of her bedroom are covered in posters bearing slogans like "Hambach Forest Stays," and "Grandpa, what's a snowman?" The 14-year-old student from the town of Hürth near Cologe is a member of the local faction of the climate protection movement, Fridays for Future, and has been helping to organize this Friday's digital global climate strike from her family's home.

"Since we don't have to go to school at the moment, it's easier to divide up my time," she says. "I do my schoolwork in the morning and spend the rest of the day preparing for the online demonstration."

The original global climate strike planned for April 24 would have seen hundreds of thousands of people take to the streets all over the world calling for climate action. Preparations for the demonstration in Cologne began back in mid-January. 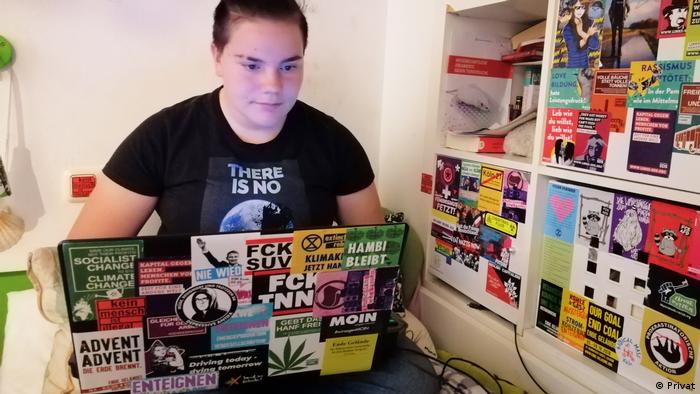 Climate activist Finja Rausch sits on her bed, her laptop open in front of her

"We had already laid out a route for the protest march in Cologne, ordered the stage to be used in the rally and organized bands that would play between the speeches," says Finja. But then the COVID-19 pandemic hit, and all public meetings were banned.

"We quickly realized that we had to do something, because the issue of climate change seems to have been forgotten as a result of the coronavirus crisis," says Pauline Brünger, a high school student from Cologne. As she's in charge of the social media accounts for the German branch of Friday's for Future she's been busy online, coordinating the upcoming digital strike.

"A lot of people are online at the moment, so we decided to take our strike there. It means we can make our presence felt without putting others in danger, while stilll making it clear that the fight against climate change has to continue."

Like other climate activists, Brünger is also worried about the broader impact the COVID-19 crisis will have on climate policy. She is concerned that some measures currently under review as ways to mitigate the impact of the pandemic, may worsen the climate crisis in the long run.

"If a scrapping bonus is introduced now so that people can buy new cars, then we can probably forget about a transport transition," says Brünger, adding that this is the ideal time to consider what is really important and to ask what kind of world we want to live in.

Fridays for Future is asking politcians to kickstart the economy with sustainability in mind, so society will also benefit, Brünger explains. She says it would be a better use of taxpayers' money to invest in renewable energy sources or improved healthcare systems than subsidies for the coal industry.

Fridays for Future are joined by environmental organizations, trade unions, the Protestant Church and political parties like the Greens in their calls for a digital strike for the climate. 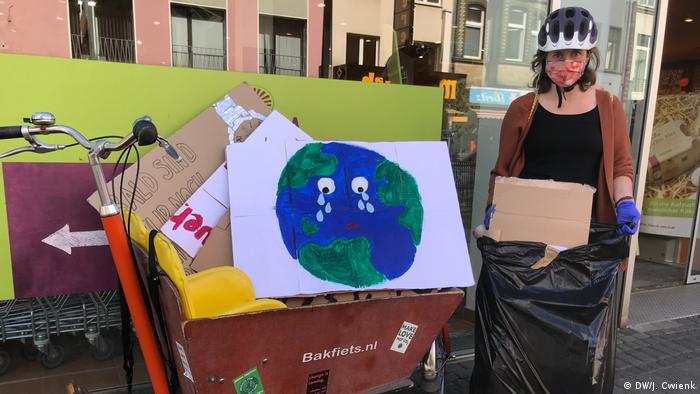 Part of the online demonstration will involve as many people as possible posting their climate protection demands on social media under the hashtags #FightEveryCrisis and #ClimateStrikeOnline. Fridays for Future is also planning to host a live stream on YouTube. In Germany, the online strike will run for 2 hours from 12.30 p.m. until 2.30 p.m. Hosting duties will be switched between different cities and will include video discussions with scientists and politicians, as well as performances by artists and musicians.

"When the normal demonstration was cancelled, I felt a bit depressed at first because I'd invested so much time in it," says Finja. "But then I saw it as an opportunity to do something even cooler."

To really capture the atmosphere of an on-the-streets rally, a few activities are also being planned for the real world. In some cities, activists from Fridays for Future will be chalk painting slogans in public places, while elsewhere, posters are being hung where people can still see them.

"It's a way for people to make their presence felt in cities, even if they can't actually be there," explains Brünger, adding that they coordinated their actions with city authorities and that everyone strictly observed social distancing measures. None of the posters were touched for 48 hours before being put out in public places, and the activists wear gloves and face masks and only work in pairs.

Biking for the climate

The group from Cologne has also planned bicycle protests. Demonstrators will ride in twos at a safe distance from one another through the city using microphones or sound systems to make themselves heard. Those who live along the bike route received flyers in their mailboxes informing them of the protest — and also inviting them to hang posters in their windows or on their doors.

Finja Rausch spent three hours dropping off information flyers along one of the routes, and says the digital strike is "the most stressful" thing she has ever organized. "We only started these new plans at the beginning of April, so we had to teach ourselves a lot of new things, like how to stream something live," she says. 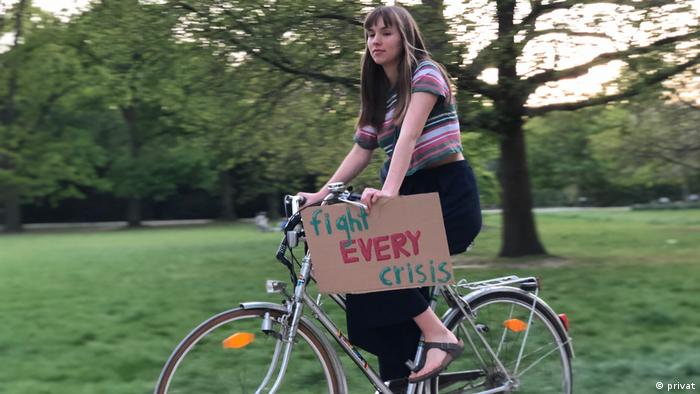 Pauline Bünger carries her poster to a collection point

Holding their meetings online or over the phone has also been a learning curve for the young activists. "We used to go out for a falafel after our planning meetings and talk about things other than Fridays for Future," says Finja. "Of course, that's all totally gone now."

She says that's why it is sometimes harder to stay motivated these days. But whenever she needs a break, she meets up with a friend who is not involved in the climate protection movement for a safe distance walk around a nearby lake.

Pauline Bünger says there are more misunderstandings as a result of communicating online. She says she is often asked the same questions over and over again and needs to explain things in much more detail than usual. When asked about what keeps her motivated, she is quite clear.

"Like with any political protest, my motivation comes from my inner conviction. But above all, it comes from the fear of what will happen if we don't do anything about climate change. Because in a way, the coronavirus crisis and the climate crisis are quite similar. If you respond too late, it will be impossible to stop their impacts."