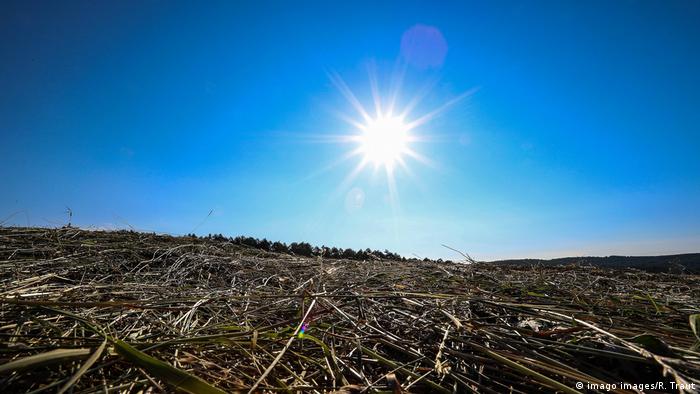 Unseasonably warm temperatures, blue skies and gardens in full bloom — most of Europe is currently enjoying dreamy spring weather. But that's not how farmers see it. They are hoping for rain, and fear that without it their crops will suffer greatly. And experts say there is a very real prospect that beyond the continuing coronavirus pandemic, Europe could be facing weather-induced crop failures in the very near future.

Right now, there is little talk of that threat as farmers are more concerned with an acute lack of seasonal harvesters from abroad. The labor shortage is the direct result of travel bans put in place in an effort to curb the spread of COVID-19. Quarantine-related stories like this one have dominated headlines for weeks, leaving no space for the climate change stories they replaced — stories about massive forest fires raging across Australia and Brazil, for instance.

"January was too warm. There is no evidence that global warming has paused or slowed," says Andreas Becker of the German Weather Service (DWD) in Frankfurt am Main. Moreover, he says, January and March were far too dry and February too wet. Water levels in Germany's largest river, the Rhine, were more than 6 meters (20 feet) above average in early March, though they are now falling once again. Currently, the Rhine is close to its average depth of 3.5 meters, but water levels are continuing to drop.

Meteorologist Becker says the good thing about having such a wet February is that it helped offset some of the groundwater loss that occurred over the past two years as temperatures soared above 40℃ (104℉). He says plants, which draw water from the top 20-50 centimeters (8-20 inches) of soil, have been doing better than trees, which draw theirs from depths closer to two meters. Becker says there is very little water remaining at those levels.

Now, he warns, things will have deteriorated further still as March was such a dry month. This year, Germany only received 50-75% of the rainfall that it usually gets for the month. For meteorologists, that comes close to qualifying as a drought.

Andreas Marx from the Helmholtz Center for Environmental Research's Central Germany Office in Leipzig points out that the past three years have seen unusually low amounts of precipitation. He says that has been the case not only in northern Germany, but also in Poland, Ukraine, Belarus, Russia and Romania.

The expert says three-week cycles without rain are normal for Europe, but says what has been unusual over the past three years has been the increasing stabilization of the jet stream, which normally meanders around the North Pole some 10 kilometers (6.2 miles) above the Earth. A veritable conveyor belt for winds, the jet stream normally winds and shifts its path, changing weather patterns on the Earth's surface.

"Climate change has caused the North Pole to warm far faster than the Equator. Now the jet stream is increasingly moving in a north-south direction," says Marx. As a result, the jet stream is not moving around as much as it once did, leading to stable weather patterns such as the extended dry periods that Germany suffered in 2018.

How dry will things get this summer?

Since weather predictions for even a week or two are considered uncertain, meteorologists shy away from making long-term weather predictions about things such as how the upcoming summer might be. Both Becker and Marx add that due to Europe's varied geography — including its mountains and oceans — it is far more difficult to predict the weather in Europe than in places like Australia, which is surrounded by water. Still, both expect this summer to be warmer than usual. The German Weather Service, for instance, has already suggested that temperatures in Germany could be half a degree (Celsius) warmer than average.

Marx, who is currently basing his modeling on data from the European Center for Medium-Range Weather Forecasts (ECMWF), says not only does he expect the coming summer to be warmer than usual, but also drier. He points out that hot periods have changed all over the world.

"Technically, hot days are those over 30℃. Statistically, one can expect seven or eight such days each year in Leipzig. But we had 36 of them in 2018, and 29 in 2019. That means heat waves last three to four times longer than average." Marx says that has serious consequences for farmers but also for human health.

Can the coronavirus help save our planet?

Heat could amplify the effects of the coronavirus

If things go as the experts expect, Europeans will not only face the prospect of movement restrictions necessitated by COVID-19, but will also have to suffer under extended periods of extreme heat. That heat is something that already plagues elderly citizens — who are also most at risk from the coronavirus — and it makes wearing a face mask all the more uncomfortable.

Long droughts also increase the chance of forest fires and the massive amounts of smoke that they produce. That would be yet another burden on peoples' lungs, especially those infected with the coronavirus.