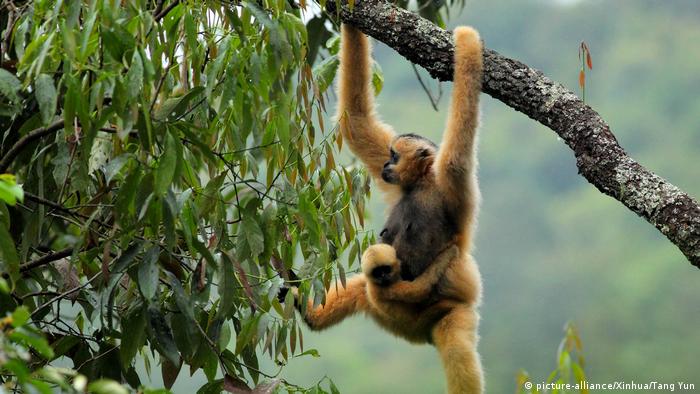 The world has reached "a moment of truth" when it comes to protecting its vital ecosystems, United Nations biodiversity chief Elizabeth Maruma Mrema said on Monday.

She was speaking at the UN COP15 (15th conference of parties) biodiversity summit in Kunming, the provincial capital of Yunnan in southeastern China.

The world has not achieved the necessary breakthroughs from 2011 to 2020 and was not yet able to safeguard ecosystems that were key to human well-being, Mrema added.

What is happening at the COP15 summit?

Representative parties to the Convention on Biological Diversity (CBD) are meeting online for the first round of talks to discuss a post-2020 biodiversity framework.

This will build on the CBD's previous strategic plan for biodiversity, which ran from 2011 to 2020.

The new framework will set targets for protecting ecosystems by 2030. As it stands, the framework comprises 21 targets and 10 "milestones" proposed for 2030.

One target up for debate is the "30 by 30" plan to give 30% of lands and oceans protected status — a measure supported by a broad coalition of nations.

Another goal is to stop producing plastic waste and reduce the use of harmful pesticides.

The pact is expected to be finalized during a second round, to be held in-person in April and May 2022.

There are currently 195 countries and the European Union that are party to the CBD. The United States, however, has not yet ratified the convention.

Due to delays amid the global coronavirus pandemic, the parties are debating a post-2020 framework a year late.

Lin Li, the director of global policy and advocacy at WWF International, told DW that the current draft biodiversity agreement was "low in ambition" and "weak in several key areas, including on finance and on the drivers of biodiversity loss."

"The Kunming Declaration, due to be adopted at the meeting, is a critical opportunity" for leaders to send a sign that they are committed to "securing a transformational outcome," said Lin.

She told DW that the new draft must "include a clear and measurable global goal for nature." While WWF supports the 30% land and oceans plan, she highlighted how "the lack of a milestone to halve the footprint of production and consumption by 2030 is very concerning."

While China has faced criticism for putting economic development before environmental costs, Lin told DW that the summit was "a critical opportunity for China" as it takes on the CBD presidency for the conference of parties. She said the expectation from many countries for China to step into this role is very high, as the country "can and should play a key role in global governance processes linking action on climate and nature."

In a statement released online, international environment network Friends of the Earth has called for the framework to incorporate a rights-based approach.

Germany's Friends of the Earth association, known as BUND, on Monday called for Germany's next government to take the preservation of biodiversity seriously and make species preservation a key point in its coalition agreement.

Germany's Green Party saw its best-ever performance in the country's general election in September, putting it in a so-called kingmaker position amid ongoing coalition talks.

Some climate experts are hopeful that this strong position means the party can make a rejuvenated push for climate change issues on Germany's political agenda.

What's the state of Earth's biodiversity?

According to a 2019 UN report, around 1 million animal and plant species are threatened with extinction amid human encroachment on habitats, over-exploitation, pollution, the spread of invasive species and climate change.

An analysis by insurance firm Swedish Re in 2020 found that a fifth of the world's countries are at risk of ecosystem collapse due to the destruction of wildlife and their habitats.

The conference comes ahead of the COP26 climate summit set to begin next month in Glasgow, Scotland.

Seeds of change in Ecuador