Afro-Colombian women on the Pacific coast have faced violence, conflict and the ecological fallout of mining and illegal logging. Now they're working together to protect their rich environment. 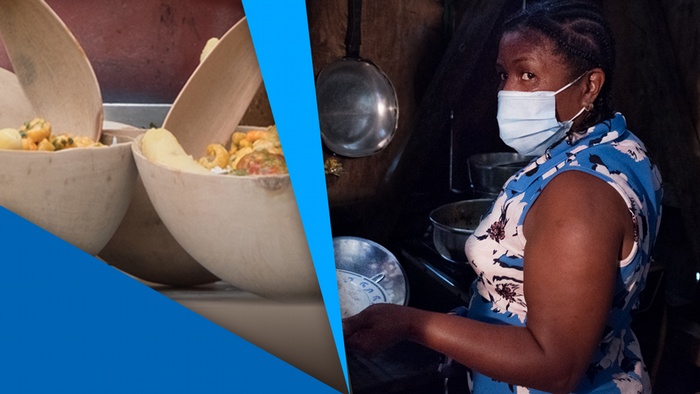 Each morning as the sun rises over Colombia's western shores, a dozen or so women set out in canoes and motorboats and travel two hours upriver through thick mangrove forests to pick "piangua," a cockle-like mollusk endemic to the Pacific coast.

The work, traditionally done by women, is exhausting. Esneda Montano spends most of her day crouched in the mud, where piangua are far from the only creatures lurking — snake and toadfish bites, not to mention the onslaught of mosquitos, are all dangers of the job.

Yet Montano, who is approaching 50, is determined to keep at the work she's been doing since she was just eight years old. "I learned from my grandmother," she recalls. "This is a tradition and a legacy that our ancestors have left us."

Montano lives in Quiroga, a small municipality of southwestern Colombia, where the majority of the population are of African descent. She leads the "Asociacion de Mujeres Construyendo Suenos" (the Association of Women Building Dreams), a group of 20 local "piangueras." Many are single mothers, and many have previously been displaced by armed conflict in the region.

They originally banded together in 2013 to feel safer from the armed groups in the region at that time. Selling local seafood — crab and clams as well as piangua — offers economic independence in a community with few opportunities for female employment. "This allows us to support our sons and daughters, to have a little income and not be dependent on our partners," said Montano, who is married. 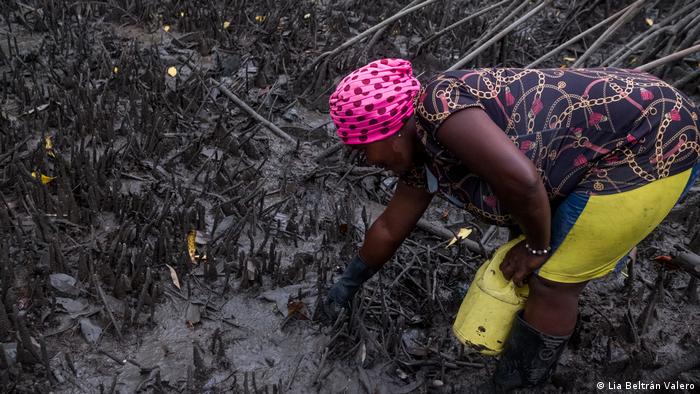 Picking clams from the muddy mangroves can be back-breaking work

But this economic independence is inextricably linked to the health of the mangrove forests and surrounding waters — ecosystems that are under pressure from logging, mining and cultivation of coca, the plant from which cocaine is derived.

"Before, we just took the branches of the mangroves to build our houses," Montano said. "Now, outsiders come and cut down everything. And the chainsaw oil they leave kills piangua. If we don't keep what we have, we are left without food because the mangrove is our means of subsistence."

The plight of the piangueras echoes a global problem. When environmental degradation destroys livelihoods, women are often hit hardest.

The majority of the world's poor are women, and according to economist Linda Scott, author of "The Double X Economy," 80% of the world's arable land is owned by men. Women are less likely to have resources to fall back on in times of scarcity or disaster and often have fewer job opportunities. And when societies are put under pressure from climate change, violence against women and girls increases.

Much of the work women do — caring, homemaking, subsistence agriculture and collecting water — has a low environmental impact but becomes acutely difficult when natural resources are depleted. But with so much invested in these resources, women can also play a key role in preserving them.

"As women have been relegated to the margins, that situation has always forced them to organize themselves," said Diana Ojeda, feminist geographer and professor at the University of the Andes in Bogota. "Otherwise, they will not survive. Women organize to share care, to collect water, to care for those who are sick, to deal with the traumas of war."

Women have been gathering piangua sustainably for generations. Now, with the future of this way of life bound to the fate of the ecosystem, the women of Construyendo Suenos are actively working to keep both alive.

Since 2020, Montano and some 100 other women piangueras from various organizations have restored 18 hectares of mangroves affected by illegal logging, which are now used for house building. Each week, they set off in canoes to measure and monitor the mangroves. 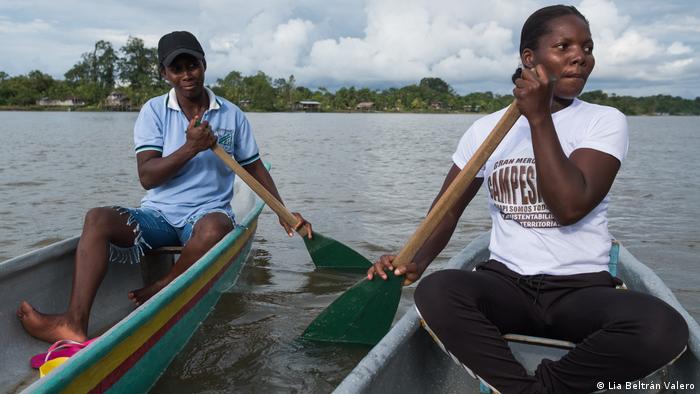 Stella Gomez, officer of the marine program of the Worldwide Fund for Nature in Colombia, says more and more women are gaining independence by collecting piangua.

"This has a direct impact on the protection of the mangrove swamp and the food security for their families," said Gomez. This doesn't just help them make a living — these mangroves are vital carbon sinks and hotspots of biodiversity, as well as protecting the coast from storms, she added.

The piangueras are not the only group of women fighting environmental degradation in the region. On this stretch of the Colombian Pacific coast, there are no roads, and rivers are the main arteries connecting communities.

Past riverbanks dotted with traditional wooden homes built on high stilts, motorboats and canoes carrying food and merchandise bustle up and down the waterways. But these vibrant scenes belie the damage done by extractive industries to the community's health. 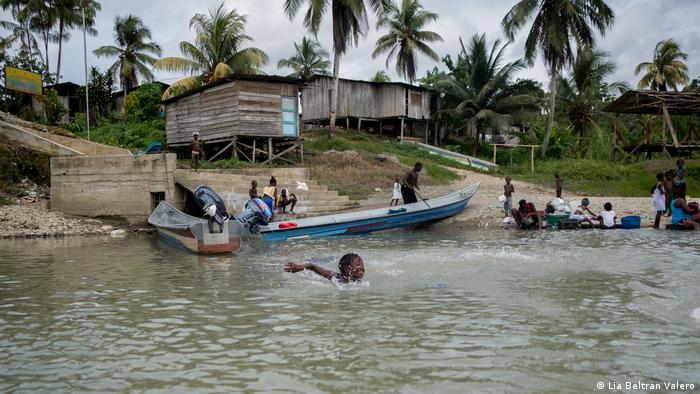 The municipality of Timbiqui, also on the west coast, has been a goldmining district since the late 18th century. But over the last 20 years illegal mining with backhoes — a kind of mechanical digger that rips up vegetation and stirs up sediment — has replaced artisanal techniques.

At the same time, chemicals used in gold mining have contaminated the water and soil. Oil, fuel, cyanide and mercury dumped into waterways by illegal miners are killing flora, fish and crustaceans along the river.

Luz Nery Florez has a local reputation for her culinary flair and, like most women in the region, she is responsible for feeding her family. She gets up each morning at dawn to prepare enticing dishes of fish cooked with banana and herbs grown on traditional raised beds in her kitchen garden.

But this everyday care that women in the community do for their families becomes difficult when food and water are no longer safe and the waterways that were once the lifeblood of the community run with poisons.

Mercury from mining gets into the human body through skin contact, inhalation or through the food chain. Mothers may even pass it to their unborn children, or to their babies through breast milk. In high concentrations it can result in physical deformities and affect brain development.

"When illegal mining started in 2010, a lot of women got sick," Florez said. "Children got diarrhea, disease outbreaks, or infections. You would go into the river and come out dirtier." 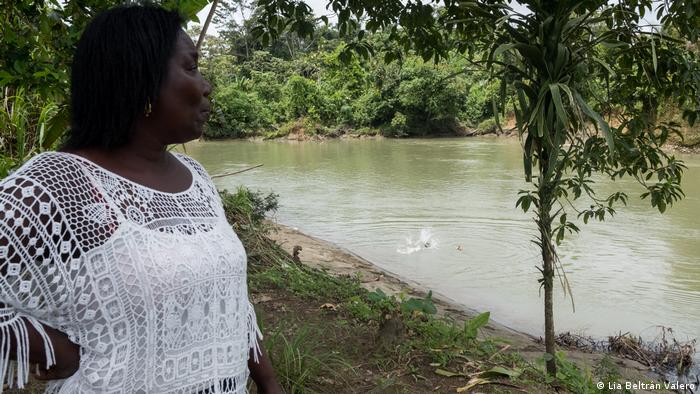 These days, the women say they are forced to travel further to find clean drinking water. And all this is compounded by the chemical run-off from coca plantations. In 2019, the Colombian Drug Observatory reported that some 1,464 hectares of coca were being grown in Timbiqui — mostly controlled by illegal groups.

Which is why the economic strategies offered by local women-led groups are so important, Florez explained. She is president of "El Cebollal," an organization of 13 women and four men who catch river shrimp using traditional narrow-mouthed baskets, and cultivate various plants, including calabash trees, to produce handicrafts. 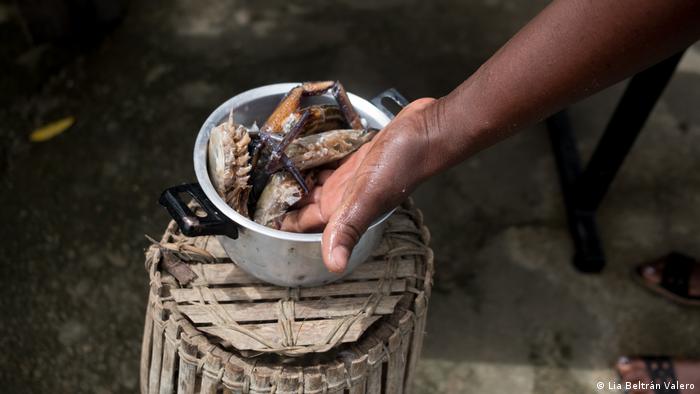 River shrimp, a delicacy that won't survive unless the river keeps healthy

"Instead of cutting down trees to grow coca, we promote another way to make money with our plants and shrimp — and without destroying the environment," Florez said. The independence these initiatives offer can also give women more power over their lives — power to resist the forces that damage and exploit not just ecological resources but women themselves.

The Chiyangua Foundation, a women-led organization that has worked on gender rights in the region for the last 26 years, is recovering ancestral knowledge about plants to produce flour from papa china, a root plant native to the area, and cultivate herbs to use in food, cosmetics, for medicinal purposes, and as bug repellants.

"We know that one of the main factors that cause some types of gender-based violence is the economic dependence or subordination that women have to men," Marilyn Caicedo, coordinator of the Chiyangua Foundation, said. "So, when implementing productive projects, women can say, 'I can also generate income and I don't have to put up with this kind of thing.'"

Northern Kenya's herders are feeling the effects of climate change. It's hotter, drier and clashes over water are common. Habiba Tadicha is fighting for a better future for her community.