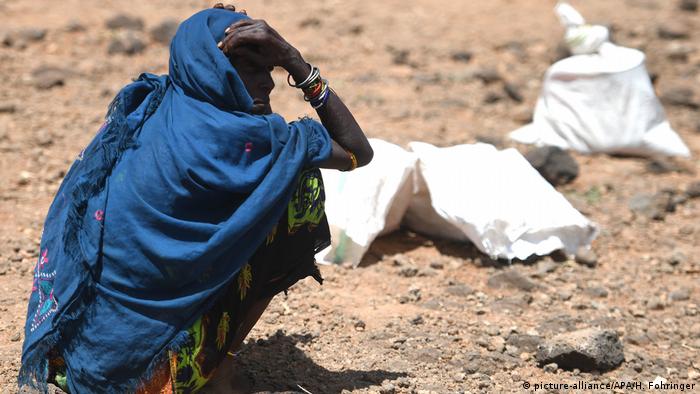 Ntoya Sande was 13 years old when she got married — against her will. "I was sent to be married because of a shortage of food in the house," she said. Her parents used to have a small piece of land, but floods wiped out their harvest. "I tried to negotiate, to tell my parents that I wasn't ready, that I didn't want to get married, but they told me that I had to because that would mean one mouth less at the table."

Sande lives in Malawi's Nsanje province. Her story is one of thousands of cases highlighted in a recent study from the International Union for Conservation of Nature (IUCN). Two years in the making, the report is the largest and most comprehensive study to date on the effects of climate change and environmental degradation on gender-based violence.

"This study shows us that the damage humanity is inflicting on nature can also fuel violence against women around the world — a link that has so far been largely overlooked," said Grethel Aguilar, IUCN's acting director general. "This study adds to the urgency of halting environmental degradation alongside action to stop gender-based violence in all its forms, and demonstrates that the two issues often need to be addressed together."

Malawi isn't the only place where minors are being married against their will to help their families survive climate disasters. According to the study, girls in Ethiopia and South Sudan are also being sold off in marriage during extreme droughts, in exchange for cattle.

Juliane Schmucker, the regional director for Asia at humanitarian organization Plan International, said the rate of child and forced marriages demonstrably increases in crisis situations. "It's simply a survival strategy: to get rid of a daughter to relieve the pressure on the family, or it's the only way to generate income," she told DW.

Growing resource scarcity also increases the risk that women and girls will be victims of violence. With increasing drought and desertification in the global south, more and more water sources and wells are drying up. Fetching water is often a woman's job, and if they're forced to walk farther for that water the risk of sexual assault also increases, especially in regions characterized by armed gangs. 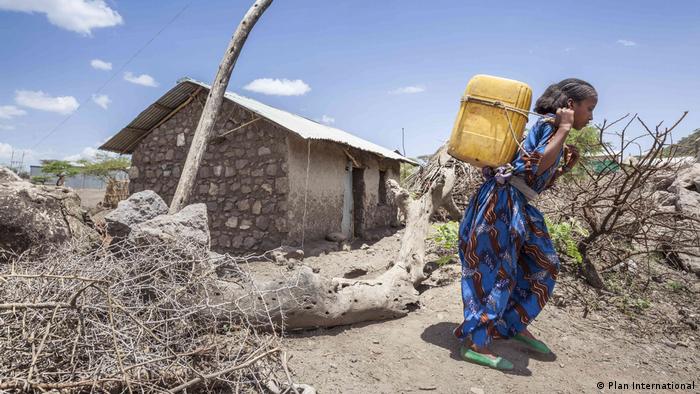 Walking to collect water can put women in dangerous situations

The same risk applies to gathering firewood, said Dirk Bathe, spokesman for the international aid organization World Vision. "That's why we build wells in the villages directly, or nearby, and try through reforestation efforts to plant trees near settlements," he told DW. In so doing, they often rely on farmer-managed natural regeneration (FMNR), a planting technique which uses felled tree stumps and underground root systems. It was awarded a Right Livelihood Award, also known as the alternative Nobel Prize, in 2018.

In addition to practical measures, aid organizations have also called for changes to traditional gender roles. "We've seen great success when religious leaders use their influence to make it clear that men have no right to inflict violence against women," said Bathe. It's also important that girls and women know who they can contact after an assault, and that they're encouraged to do so, added Schmucker.

Women living on many of Africa's coasts and lakes have also suffered as fish have become scarcer. Fishermen peddling their wares are now not only expecting money as payment — they're also demanding sex. According to the IUCN study, this practice is now so common in western Kenya that it has a name: the Jaboya system.

World Vision has tried to counteract this form of sexual exploitation, in particular in the eastern African region around Lake Victoria, where women have been given the opportunity to breed fish in ponds. "This way, they can now set up their own businesses and sell fish without getting into violent situations," said Bathe. 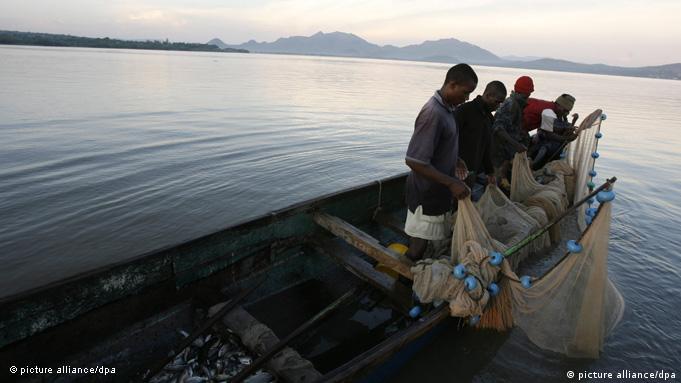 With fish scarce, some fishermen in Kenya now expect sex in addition to money 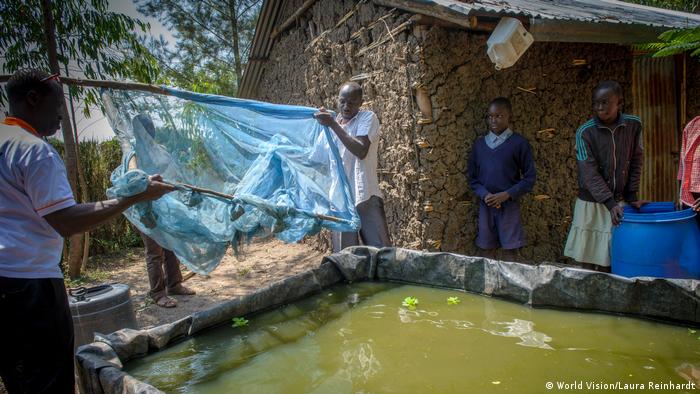 Read more: Living in the shadows of violence and development

Both World Vision and Plan International also confirmed another of the study's observations: In places where women are responsible for agriculture, a sudden natural disaster or extreme weather event can have a dramatic effect on their social and family standing. If harvests are threatened or wiped out altogether, this can lead to violence — often from within their own families.

"Diversifying their sources of income is the most important way to protect women," said Schmucker. "If we help women to adapt to climate change and improve their income situation, everyone benefits — including children and men," said Bathe. 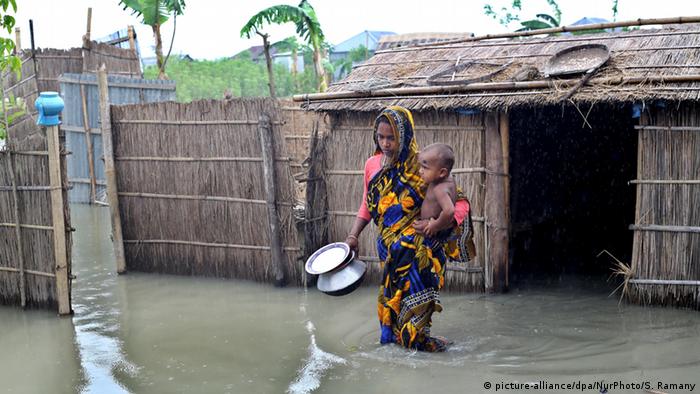 In Bangladesh, many women prefer to ride out natural disasters in their homes rather than in emergency shelters

Women and girls can suffer terribly in extreme weather situations and during natural disasters, when societies dictate certain behaviors and prohibit others, such as being out in public alone.

Women are also more likely to die as a result of flooding in Bangladesh, said Gotelind Alber of the gender equality network Women for Climate Justice, because they rarely seek refuge in emergency shelters. "These shelters are very cramped, and for a Bangladeshi woman it's not appropriate to stand there face-to-face with men, or to use the same toilet," she said. "That's why most women prefer to barricade themselves in their huts, where they're often simply washed away by the floods."

But men also die because of these traditional societal roles, Alber continued. "In Australia, men are much more likely to commit suicide than women if they lose their land or their job," she said. "Men receive significantly less help than women in crisis situations, which is primarily related to the traditional view of masculinity." 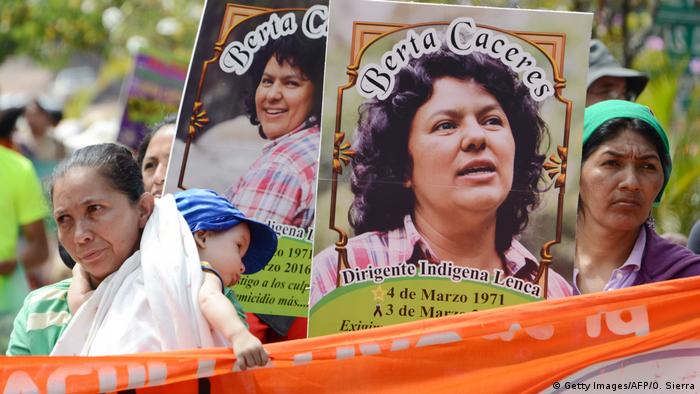 Environmental crimes, such as poaching and illegal resource extraction, can also lead to gender-based violence. According to the IUCN study, threats and sexual violence such as rape are often used to target environmental activists to undermine their status within the community, and to prevent other women from working to preserve the environment from the construction of a new mine or dam, for example.

Similar strategies are also used in industrialized nations, as women who work on environmental issues are threatened with rape on social media in order to intimidate and silence them.

Still no climate justice in Germany

The issue of gender and climate has, however, been a prominent feature of UN climate conferences since 2012.

At the most recent summit in Madrid in December participating states agreed on the second Gender Action Plan, with the goal to put women on an equal footing on all levels of climate policy — in institutions, but also in individual climate protection projects. The aim is to reduce structural gender inequalities around the world.

That includes many retirees and single parents, most of whom are women. According to Alber, if climate protection in Germany is to be equal for both genders, the government has to offer a better compensation than a simple commuter tax relief scheme.

No country is doing enough to protect children from the impact of climate change, a joint report by the World Health Organization, UNICEF and The Lancet has found. (19.02.2020)