Two and a half years after the murder of environmental activist Berta Caceres, eight suspects will stand trial in Honduras. The joint plaintiffs have criticized the prosecution for deliberately withholding evidence. 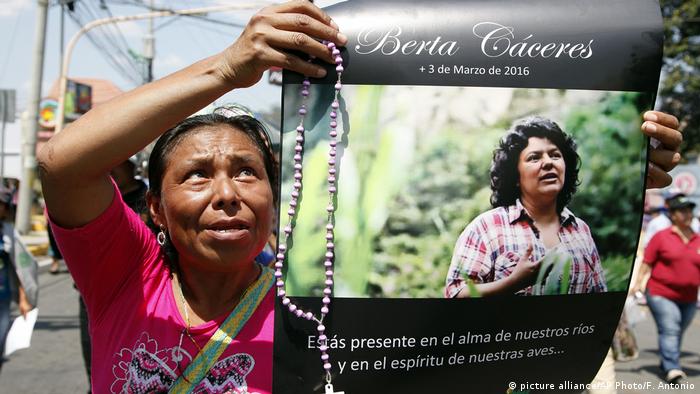 Berta Caceres, a human rights and environmental activist in Honduras, was a prominent coordinator of the indigenous organization COPINH. For years she fought against the construction of a hydroelectric power plant on the Gualcarque River, a project that would have severely altered fragile ecosystems and the traditional home of the Lenca people. In April 2015 Caceres was awarded the prestigious Goldman Environmental Prize for her work.

Less than a year later, in March 2016, Caceres was killed by several armed men who broke into her home.

The trial of eight suspects in the Honduran capital, Tegucigalpa, begins Monday. A commission made up of representatives of 17 international and national NGOs, as well as human rights experts, will be monitoring proceedings.

Among those standing trial are former employees of the Honduran company DESA, the owner and operator behind the hydroelectric power plant on the Gualcarque River, as well as active and former members of the Honduran military.

COPINH and members of Caceres' family hold DESA and state security agencies responsible for the crime. In a separate trial, the responsibility of former DESA manager David Castillo Mejia, who was arrested last March, will be clarified.

'Plaintiffs, victims being deprived of right to truth'

There were repeated delays and irregularities in the run-up to the trial. In September 2016, some of the investigation files were stolen. And lawyers for the Caceres family have repeatedly been denied access to investigation results by the Honduran public prosecutor's office, despite several court orders.

It was only this past August, a few days before the hearing of evidence, that the public prosecutor's office relented. It turned out, however, that even more than two years after the murder the public prosecutor's office still had not analyzed much of the confiscated evidence, such as the suspects' computers and mobile phones. Information potentially relevant to the case was therefore not taken into consideration in the hearing.

"The plaintiffs and victims are being deprived of the right to the truth," said Ariel Madrid, a lawyer for the Caceres family. "We have prepared a very solid line of argument, but it will be difficult to maintain with the evidence we have."

The trial is also likely to be hampered by the fact that several witnesses have not been allowed to testify. The court has rejected four members of the influential Honduran Atala Zablah family who, as majority owners of the DESA company, are said to have had close ties to some of the defendants. 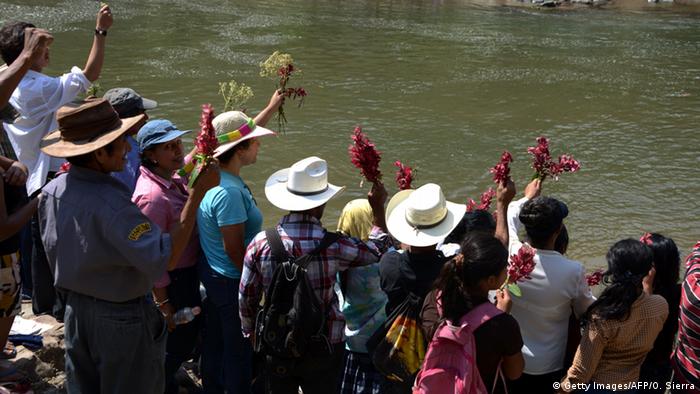 Following her death, supporters honored Berta Caceres with a religious ceremony on the Gualcarque River

Will trial be transparent?

Caceres' family is, unsurprisingly, suspicious of the work of the public prosecutor's office. Shortly after the murder, her relatives and COPINH commissioned an international group of experts (GAIPE) to investigate the crime. In its report, published last year, GAIPE concluded that DESA company representatives, as well as state and private security forces, were involved in crimes related to the murder.

"The DESA company was founded as a kind of criminal structure in order to threaten people and destroy social ties in communities," said GAIPE member Miguel Angel Urbina. The original financial partners in the hydropower project included the Central American Bank for Economic Integration, the Finnish development bank Finnfund and the Dutch financial institution FMO. European investors have since withdrawn from the project.

It remains to be seen whether the court will conduct the proceedings in a transparent manner. Video and audio recordings have been banned during the supposedly public murder trial, despite a request by the joint plaintiffs.

"This was rejected on the grounds that the presence of the victim's representatives alone would ensure publicity," said Ariel Madrid. "Publicity will only be created, however, if the media is allowed to broadcast the trial."

Environmental activist Berta Caceres was shot to death in her home in March 2016. Her family expressed dismay over the sentence, saying the "maxmum penalty was not applied."

A group of armed men entered the home of environmental activist Felix Vasquez and killed him in front of his family, according to Honduran police.