The deadly price of environmental activism | Environment | All topics from climate change to conservation | DW | 07.03.2016

A prominent Honduran environmental activist has been found dead in her home - as a result of her activism, it's suspected. Green activists in Latin America and Asia continue to pay for resistance with their lives. 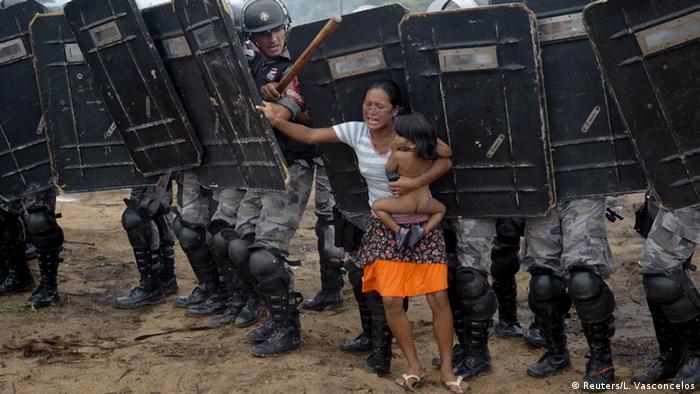 Distinguished environmental activist Berta Cáceres, leader of the indigenous Lenca people of Honduras, was found shot dead in her home in Honduras on Thursday, March 3, 2016. Although the perpetrator is still unknown, her fight for the defense of indigenous lands had previously provoked death threats to her and her family.

The indigenous activist was internationally recognized for her successful campaign against the Agua Zarca dam. Sinohydro - the world's biggest dam builder - had pulled out of the controversial hydroelectric project as a result of organized opposition headed up by Caceres.

In 2015, as Caceres was awarded the Goldman Environmental Prize for her activism, threats of kidnapping, sexual assault and death against her and her family were incessant. At least three activists had been already killed for opposing the Agua Zarca dam.

Although it has yet to be determined who killed Caceres, for Billy Kyte - senior campaigner for Global Witness - there is no doubt: "Her battle for indigenous rights has led to her death," he told DW.

In neighboring Guatemala, at least 10 environmental activists - most of them indigenous - were murdered over the course of 2015.

Delfina Mux Cana, director of the support program for indigenous communities from the non-governmental organization IBIS in Guatemala, told DW that such violent episodes are ongoing, and are all clearly linked to megaprojects and extractive activities.

"The only means indigenous groups have to protect their rights are international mechanisms, because local governments don't support our protests," said Cana. As a result, native people turn to defend their lands and rights - which then makes them targets.

Cana sees existing laws to protect native communities and activists as only theoretical. "In practice, the opposition is being either oppressed or murdered," she said. 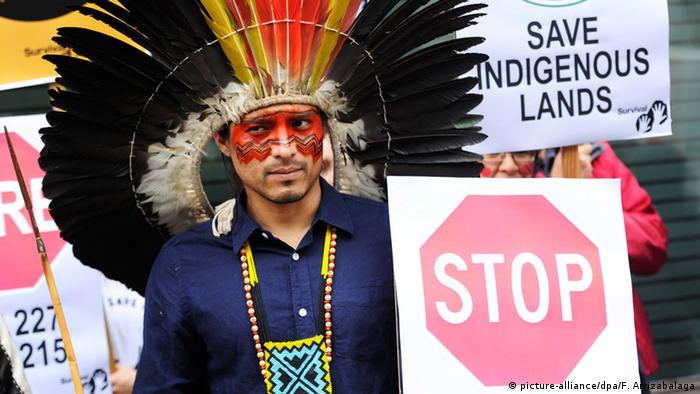 Increasing global demand for products like beef, soy, timber and oil has been leading to development of new territory. And human rights groups are noting that ever more often, companies are striking deals with state officials without consulting local communities.

Arlen Ribeira, manager of COICA (Coordination of Indigenous Organizations in the Amazon) described to DW how various megaprojects are taking place in the Amazon region, directly affecting indigenous communities that depend entirely on that land.

Those communities, Ribeira said, only realize what is happening when they are surrounded by bulldozers. Their subsequent resistance is met by state military forces, as well as paramilitary forces formed around oil, timber and mining business - both legal and illegal.

Indigenous leaders have been sued and legally condemned for trying to defend their rights from powerful companies, said Ribeira. "The state is not doing enough to protect us," he added. 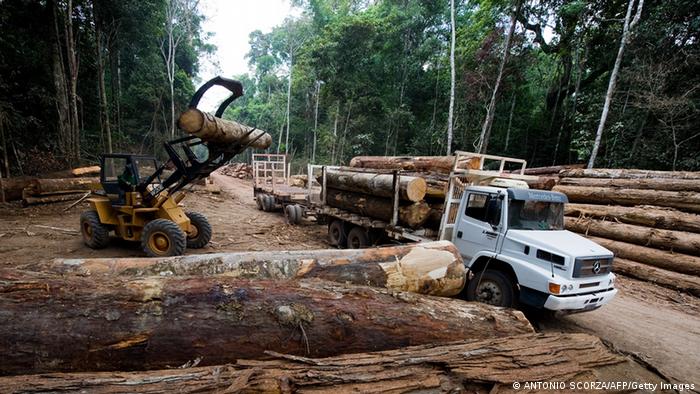 According to the Indigenous and Tribal Peoples Convention of the International Labor Organization, indigenous populations have the right to preserve their traditions, and governments must protect these from being eroded by modernization.

They should also maintain rights over the territories they occupy and use, and be involved in any economic activity that can affect them. The treaty requires that any logging, agribusiness, mining or hydropower development should be previously consented to by the native community.

The agreement, although it represents the major international binding convention on indigenous peoples, remains out of reach to most indigenous communities on the ground - due also to nebulous land title claims.

In Paraguay, for example, the government has been selling territories traditionally inhabited by indigenous groups to ranchers who cut down the rainforest to graze cattle, forcing the natives ever deeper into the forest.

The report "How many more?" published by the international organization Global Witness in March 2015, reflects how violence against environmental activists - though a worldwide problem - is particularly severe in the Latin America and Asia Pacific regions. 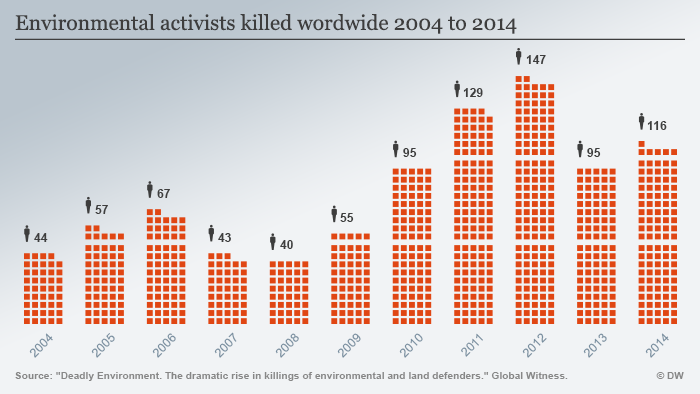 Between 2002 and 2013, 908 environmentalists were murdered in 35 countries for reasons related to their activism. But 99 percent of the cases remain in a state of impunity: only 10 perpetrators were sentenced in that same period of time.

The number of murders registered has been based on official sources and cases where the victims have been fully identified, and clearly linked to a violent death due to their environmental activism. Thus, actual figures are estimated to be higher, as many deaths have not been officially reported, especially in African and Central Asian countries.

Brazil is considered to be the most dangerous place for green activism, with 29 environmentalists killed in 2014 alone. Colombia is in second place, with 25 cases in the same year. However, Honduras is the country with the highest number of activist murders per capita, with 12 violent deaths reported in 2014. 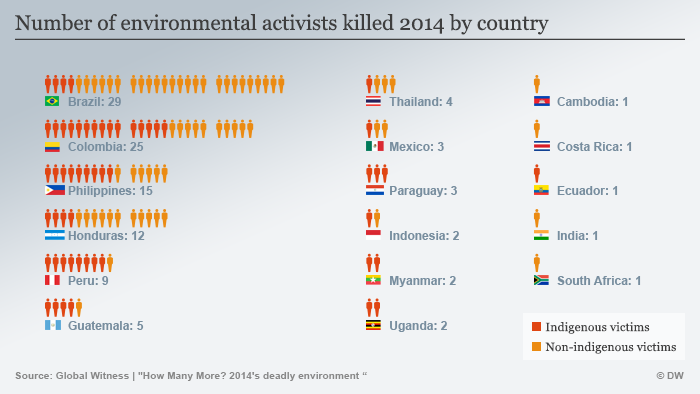 The call of the river

Berta Caceres had said that the Gualcarque River had called for help, and that this call had to be answered.

She had mobilized the indigenous Lenca people around the fight against the Agua Zarca dam, planned to be built on the river, which indigenous communities consider sacred.

Kyte of Global Witness said the project violated international law since it was initiated without the consent of the indigenous people.

The Agua Zarca dam was among hundreds of dam projects approved by the Honduran government following the coup of 2009. It would have forced indigenous communities off their land.

The campaign Cáceres led forced withdrawal from the project of the state-owned Chinese company Sinohydro - the world's largest dam developer - and the World Bank.

When the Honduran government allowed dam construction to start again, Berta Cáceres and her people, in February 2016, took the streets to continue their peaceful fight - but violence and threats followed.

"Threats and violence against Cáceres and her colleagues increased in the last weeks following the protest," Kyte said.

Honduras is considered the world's most dangerous country per capita to be an environmental activist. According to Kyte, at least 109 activists were killed in the country between 2010 and 2015.

Unfortunately, Honduras is not the only country with alarming numbers of environmental activists murdered, and efforts to defend the environment from destructive megaprojects - such as dams - look like they will continue to extract a high price.

In Norway, for example, strict labeling requirements combined with an educational campaign on palm oil - which is driving deforestation in many regions - has resulted in a reduction of consumption of that product by nearly two-thirds from 2011 to 2012.

Both Cana and Ribeira emphasized how the lack of government accountability can be traced back to a lack of will to prosecute violence against activists.

Drug trafficking is one of the biggest problems facing Central America. It is having a devastating impact on the people, but it's also a huge threat to the rainforest and coastal ecosystems. (23.02.2016)

Activists say they must up the ante as world edges closer to climate disaster 17.06.2022

In many parts of the world, journalists who report acts of environmental destruction risk threats, violence and even murder. These crimes, which frequently target Indigenous reporters, often go unpunished.

What impact is hate speech having on climate activism around the world? 29.10.2020