Activist Berta Caceres has been murdered in her home in Honduras by unknown gunmen. She had previously received death threats, and was supposed to have been under police protection. 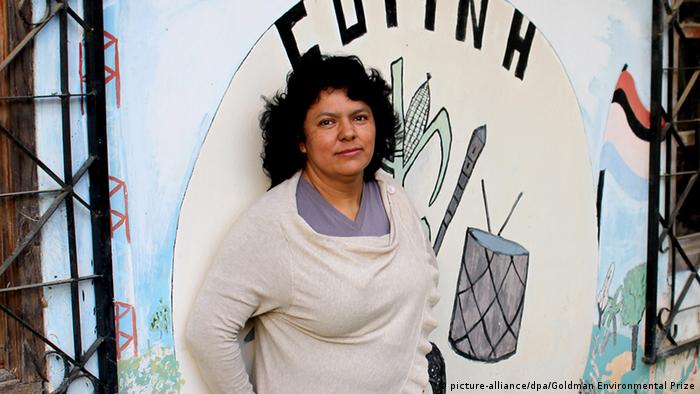 Caceres, an environmental activist known for her opposition to a recent dam project, was murdered Thursday in her home.

A Lenca Indian who had won the prestigious Goldman Enviromental Prize in 2015, Caceres was shot repeatedly after at least two assailants broke into her home. Though authorities characterized the crime as a robbery, Caceres' family believes it was an effort to silence her over her activism.

"We all know [her murder] was because of her struggle," the woman's mother, Berta Flores, told AFP news agency.

'An attack on Honduras'

Caceres had claimed she had received death threats in the past from Honduran authorities and local landowners.

Honduran President Juan Orlando Hernandez released a statement on Twitter following the murder. "The death of Berta Caceres is an attack on Honduras. It should be investigated and those responsible should be brought to justice. We demand it," he wrote.

According to a government official, Caceres should've been receiving special protection in response to previous death threats. It is still unclear why there were no police stationed at her house on Thursday.

The 43-year-old mother of four came to prominence as an activist in the 1990s, after she founded an organization called the Civic Council of Indigenous and People's Organizations.

A member of an opposition party in Venezuela has been shot dead at a political rally ahead of a major election. UNASUR, South America's regional block, has condemned the murder. (26.11.2015)

A humanitarian crisis resulting from Venezuelan border closures has prompted Colombia's president to visit the tense city of Cucuta. Residents are running short of cheap fuel and foods normally obtained via smugglers. (30.08.2015)