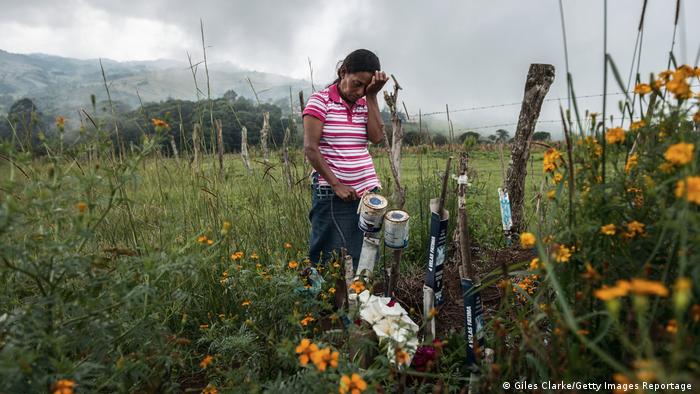 The action many of us take in daily lives to protect the planet might involve the extra headache of sorting recycling, or forgoing the pleasures of meat or a far-flung vacation. But for most of us, environmental action doesn't mean risking your life.

Yet for more and more people around the world, it can result in lawsuits, blackmail, death threats, kidnapping, sexual assault - and murder.

A new Global Witness report reveals that 2016 was the deadliest year ever recorded for environmental defenders, with 200 activists murdered - compared to 185 in 2015. The violence has also spread geographically. Environmentalists were killed in 24 countries, up from 16 in 2015.

Latin America remains the most dangerous part of the world for green activists, as the scene of 60 percent of these crimes. Brazil had the highest number murders, with 49 people killed for protecting habitats like the Amazon and Cerrado. Nicaragua had the highest rate of killings per capita. 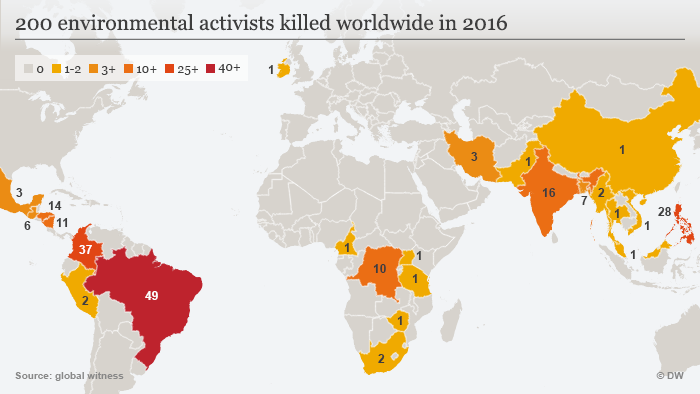 If these crimes seem a long way from where you are right now, Global Witness has news for you: It's not just unethical policies and practices over there that are to blame. They are made possible by the support of renowned international investors, in a system that links financial institutions across the globe.

People are always demanding that local governments take responsibility, Ben Leather, one of the report's authors, told DW, "but investors often escape from attention and criticism."

Those subject to abuse and violence in the defense of their land are often fighting major, internationally funded projects.

"Most of defenders murdered are opposing big projects which could not exist without the financial backing of international investors," Leather said.

Jaybee Garganera campaigns against abusive mining practices in the Philippines, where 28 defenders were killed in 2016 alone. 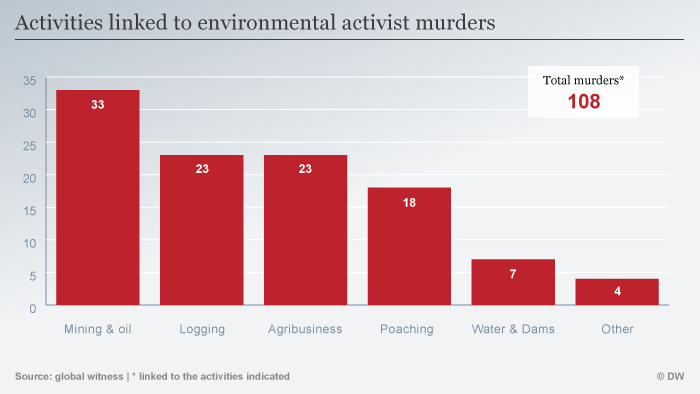 Development banks like the World Bank and the Asian Development Bank (ADB) provide capital to national banks, which in turn invest in coal mines or power plants, for example, that suppress opposition with violence against local people, Garganera said.

How clean are our hands?

The development banks profess to have high environmental and social standards. But they are under no obligation to ensure projects they finance indirectly meet them, Garganera adds.

Regarding the World Bank's financial links to projects associated with environmental and human rights abuses, Frederick Jones, spokesman of the World Bank's International Finance Corporation (IFC), told DW that the IFC "does not give credit lines or loans to financial institution clients to finance coal-related projects."

However, the banks they invest in may deal in coal, since they are often closely connected to major economic activities in those countries.

Jones said that the IFC is supporting its clients in shifting their financing mix toward more renewable energy, and to overall improve their environmental and social performance.

"The IFC rejects all violence against activists, and hopes that justice prevails in all cases," Jones told DW.

Global Witness says financial institutions argue they cannot be held responsible for what happens on the ground, which they are unaware of. But it says ignorance is no excuse.

"It is not excusable to say they do not know - they have to make sure they do know," Leather said.

The Inter-American Development Bank (IDB) is one of the institutions dodging responsibility, the report says. It finances the Hidroituango hydroelectric project in Colombia, where UN experts have documented threats and attacks against members of the local community.

The IDB Group told DW they are closely monitoring the project according to their environmental and social standards and "will take appropriate action if the evidence points to a violation of our prohibited practices."

Since the governments of most industrialized countries invest in development banks, activists argue their electorates also have a responsibility to be informed.

"The UK, German and US governments are shareholders in the World Bank," Leather pointed out. That means citizens of those countries can ask of their governments, "What are you doing to make sure that our money is not associated with these attacks?" he points out.

And, increasingly, they are doing just that. Particularly since the murder of Goldman Environmental Prize winner Berta Cáceres in Honduras last year.

Those who had been denouncing threats and attacks against Lenca activists for years were furious Cáceres had to die before the banks acted.

Still, Agua Zarca sounded a warning. Not only were environmental defenders killed - money was lost and banks' reputations suffered.

"Now other institutions have to show they've learned the lesson and put in place policies to improve the protection of defenders," Leather said. 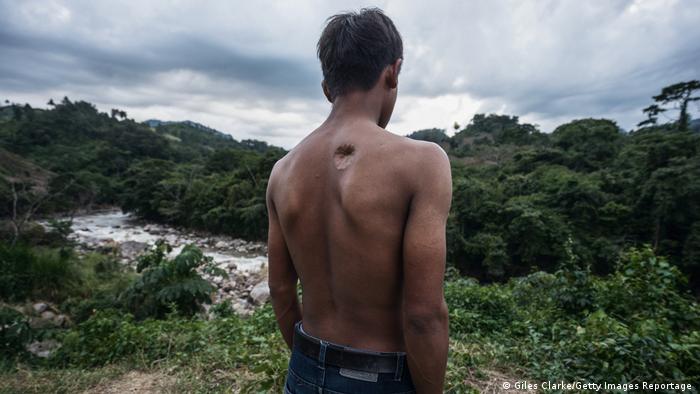 The first step is to consult local communities before implementing the projects, the report recommends.

Felipe Benitez, president of the indigenous movement of Honduras MILPAH, told DW the main problem indigenous communities like his face is lack of participation in decision-making processes - even those that impact their own land.

Three MILPAH members have been killed fighting against a dam project in Honduras - including Benitez's nephew.

One reason crimes against environmental defenders are on the rise is they usually go unpunished, giving the green light to perpetrators elsewhere. 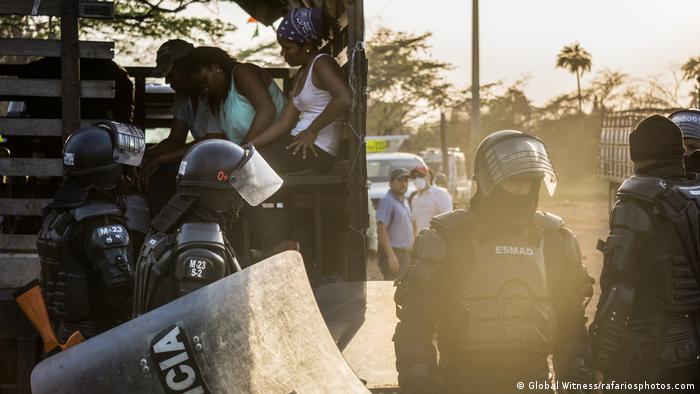 Government forces were behind at least 43 killings in 2016, the report shows

And despite growing international awareness, both the World Bank and the Asian Development Bank (ADB) are actually moving to relax their safeguards against investing in projects responsible for environmental and human rights abuses.

That's because they are increasingly in competition with rival investors like the Asian Infrastructure Investment Bank (AIIB) led by China, Garganera says.

"We are afraid this cycle, of violence and human rights violation, will increase and expand if they loosen it up even more - it is a race to the bottom for them," he said.

And, like the perpetrators of the crimes themselves, the two major development banks can carry on without fear of legal repercussions - because like the United Nations and other multilateral international organizations, they have immunity from legal action.

All the more reason for those of us who aren't risking our lives to up the pressure on our governments and financial institutions to protect those who are, activists say.

At least 14 environmental activists were killed in Honduras last year. Police are now investigating two murders in one weekend.

In many parts of the world, journalists who report acts of environmental destruction risk threats, violence and even murder. These crimes, which frequently target Indigenous reporters, often go unpunished.