Deadliest year ever for environmental activism | Environment | All topics from climate change to conservation | DW | 20.06.2016

Falling commodity prices are prompting land grabs by mining and forestry companies - often by force. That's driving a disturbing trend: 2015 saw more murders of environmental activists than ever before. 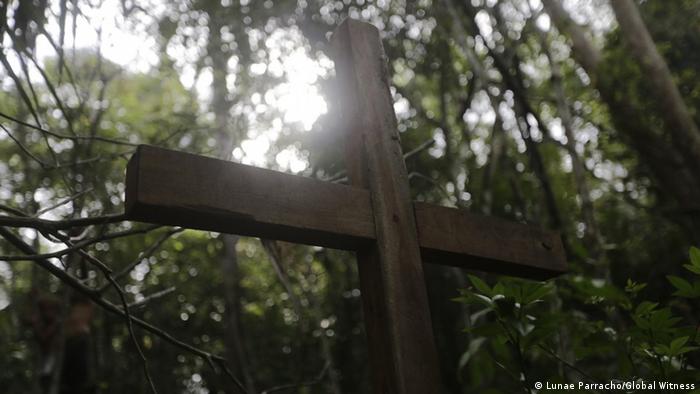 More than three people were killed each week on average in 2015 trying to protect the environment from industrial activities, according to a new report published Monday (June 20, 2016).

The 185 reported deaths worldwide last year represents a 59 percent increase from 2014. The deadliest countries for environmental activists were Brazil, the Philippines and Columbia, with 50, 33 and 26 deaths respectively.

Almost all of the deaths were the result of people trying to defend their land from extractors of commodities such as mining, timber and palm oil.

Billy Kyte, a campaigner with Global Witness - the organization that compiled the report - says the rise is due to increasing demand for raw materials worldwide. As commodity prices fall, companies are taking greater risks to secure larger profits, encroaching into ever more remote areas that were previously out of reach - with cooperation of governments.

"More and more countries are encroaching on previously untouched areas rich in resources," Kyte told DW. "Projects are being increasingly built on contested land, much of it where indigenous communities reside."

Indigenous people made up almost 40 percent of victims last year, according to the group's figures.

Much of the extractive activity is illegal, Kyte says, done by companies who hire paramilitary groups to drive out indigenous populations. Those who resist, or who organize demonstratons against the activity, can become targets.

"The majority of these people are just ordinary citizens who become activists because they hear a chainsaw in their forest, and they ask questions about who's doing this," says Kyte. 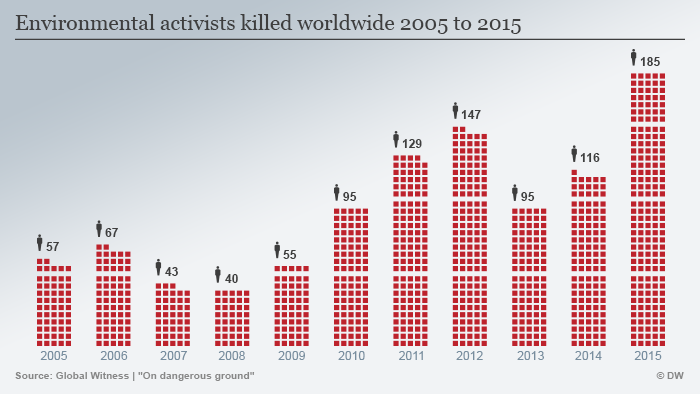 Philippines: killers in the night

Mining was the biggest driver of murders, resulting in 42 deaths. Many of these were in the Philippines, which is home to the largest copper and gold deposit in the world. The country is also rich in nickel and chromite.

The Mines and Geosciences Bureau has estimated that the country holds an estimated 664 billion euros worth of untapped mineral wealth.

Mining companies are increasingly moving into previously untouched indigenous lands. One of these areas is that of the Lumad people in the Mindanao region.

At around 3:00 am on September 1, 2015, killers arrived in a Lumad village that had been protesting encroachment on their land. The killers woke everyone up and forced them to gather on the basketball court. They then executed two members of the community, and told the rest of them to leave within two days or meet the same fate.

The two people killed were the father and grandfather of Filippino environmental activist Michelle Campos. They were just two of 25 Lumad people killed last year for protesting the illegal mining in Mindanao. The violence sparked a mass exodus of around 3,000 Lumad people, who fled on foot to the nearest town, 16 kilometers away.

"We get threatened, villified and killed for standing up to the mining companies on our land, and to the paramilitaries that protect them," says Campos. "My father, grandfather and schoolteacher were just three of countless victims."

"We know the murderers - they are still walking free in our community. We are dying and our government does nothing to help us," Campos says. 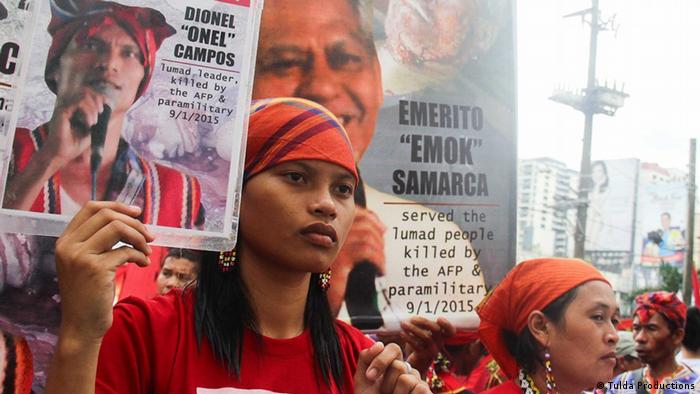 Michelle Campos holds a picture of her father, who was publicly executed for opposing mining in Mindanao, Philippines

The administration of Philippine President Benigno Aquino has faced criticism for increasing legal mining and looking the other way in the face of illegal mining. He is also accused of not enforcing the 1997 Indigenous Peoples Rights Act, which was meant to protect communities from these kinds of threats.

In Brazil, murders have been connected to logging activities in remote areas of the Amazon rainforest. While such activities are illegal under Brazilian law, timber companies are accused of hiring criminal gangs to intimidate local populations into ceding their land.

Thousands of illegal logging camps have sprung up across the jungle, where armed men cut down ancient hardwood trees like mahogany, ebony and teak. According to a report by London-based Chatham House, wood from Brazil makes up at least a quarter of illegal wood on global markets.

Those who resist the criminal gangs face violence - or death. One of last year's victims was Raimundo dos Santos Rodrigues.

On August 25, 2015, he and his wife Maria were returning home along a quiet road when they were suddenly ambushed and attacked by two men. Maria survived, but her husband was killed. 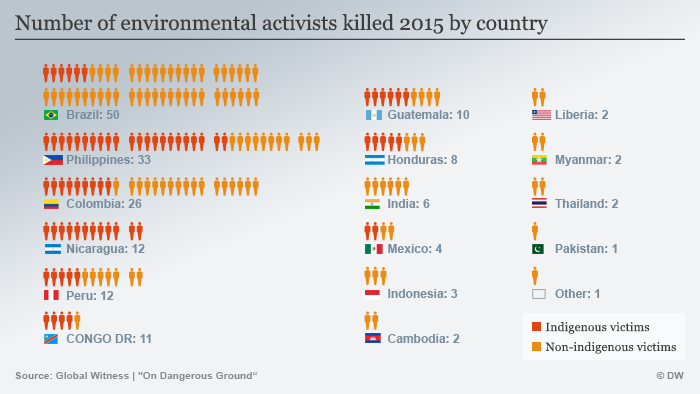 His name was on a hit list of environmental activists, because he had been compaigning to defend the Gurupi Biodiversity Reserve in the province of Maranhao from logging. Following the killing, members of his community fled the area.

Other countries in Latin America with high number of murders last year include Columbia, Peru and Nicaragua. In Columbia, the violence has been exascerbated by that country's long internal conflict, where rebels control large parts of the jungle and often finance themselves with illegal logging activities.

It is the global market of buyers that fuels the encroachment, and thus the violence. And much of the wood illegally harvested in the Amazon is being sold to buyers in Europe and North America.

"The murders that are going unpunished in remote mining villages or deep within rainforests are fueled by the choices consumers are making on the other side of the world," Kyte says.

In theory, the European Union's Timber Regulation should prevent this. It prohibits the import of wood that was illegally harvested under the laws of its country of origin.

But the problem with the law is that the EU has to take the country of origin's word for it. And often the records do not adequately demonstrate the real origin of the wood.

"We are dealing with countries where in some places there are problems with governance and corrupotion," said Anke Schulmeister, Senior Forest Policy Officer at campaign group WWF. "We would like to have the EU take more action on deforestation," she told DW. 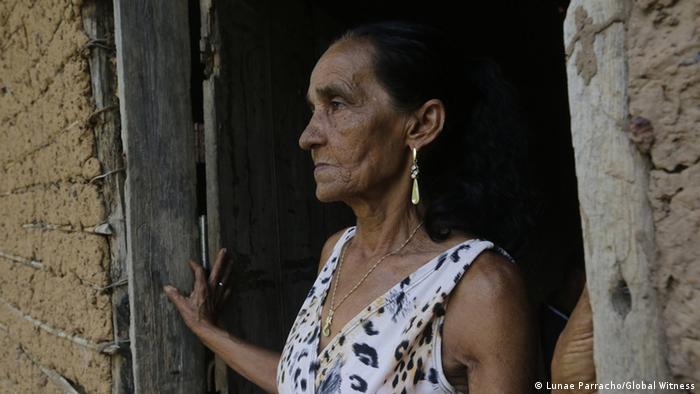 Recognizing loopholes in the existing law, the EU developed the EU Forest Law Enforcement, Governance and Trade (FLEGT) Action Plan in 2003. It is a verification mechanism in which the EU monitors logging in external countries, and comes to its own decision on whether wood has been sustainably sourced.

But progress under FLEGT has been slow. It was supposed to set up a system where countries would be awarded FLEGT licenses to import into the EU if they were found to be sustainable.

But so far only one country has this license: Indonesia. The rest of the countries still import under the timber regulation. The EU started a FLEGT action plan for South America in 2012 - but this is largely advisory.

Schulmeister says that improving EU timber import rules would help stop the demand for illegal logging. "The loopholes need to be closed, and EU member states need to have a level playing field in terms of implementation and penalties."

Kyte says that asside from addressing the increasing demand for commodities that is driving the violence, there are actions that the source nations can take to protect activists trying to defend their land.

"Companies and investors must cut ties with projects that trample over communities' rights to their land," he says. 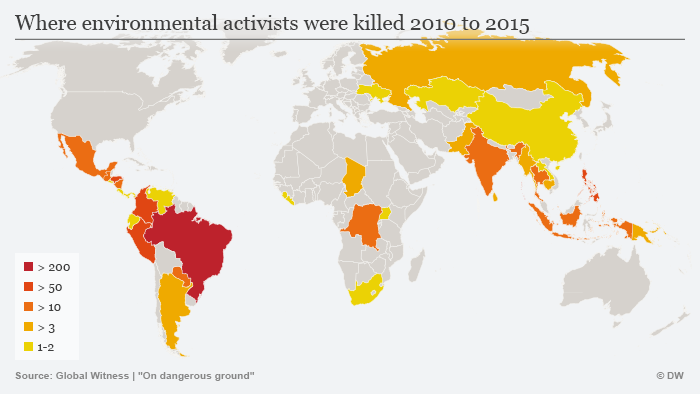 Global Witness is also calling on governments to ramp up investigation of these murders, looking also into the corporate or political forces that may have bankrolled them. They also want governments to support activists' right to oppose projects on their land, and insure that companies are proactively seeking their consent.

Most countries are already required to do this under international law - but Kyte says this is not happening.

Kyte points out that climate change and population growth mean that pressures on land and natural resources are set to increase. "Without urgent intervention, the numbers of deaths we're seeing will be dwarfed by those in the future."

High up in the Andes of Peru, a battle is raging between foreign mining businesses eying gold, and indigenous communities who want to protect their clean water and way of life. (14.06.2016)

Again, a Honduran environmental activist was recently murdered - another name on a long list. But only after the death of high-profile activist Berta Caceres has the struggle gained international attention. (18.03.2016)

Deforestation is concentrated in less than a dozen zones, including Sumatra and the Amazon, a WWF report says. Environmental experts agree: forest loss will harm biodiversity and communities - and affects climate change. (30.04.2015)