A young activist was wounded while investigating illegal logging in Cambodia, according to an environmental group. The woman was sleeping in her hammock when assailants hacked at her feet, the activists claim. 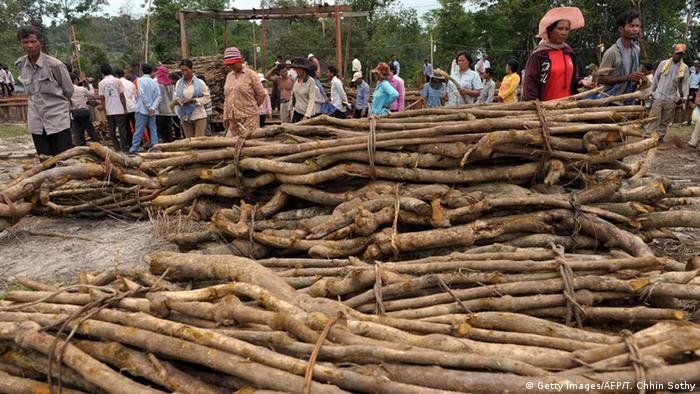 The leading environmental group Global Witness urged the Cambodian government to investigate the recent attack on the 25-year old Phan Sopheak in the nation's Kratie province.

Sopheak was on field patrol in late March, searching for illegal loggers in the Prey Lang forest with dozens of other activists. She was attacked in her sleep.

On Tuesday, Kratie deputy police chief Oum Phy declared the police had "no indication at all who the perpetrators are."

The authorities interviewed at least three of her colleagues, according to Phy.

The young activist is a member of the Prey Lang Community Network, composed mostly of indigenous peoples living in the forest and the surrounding area. At last year's Paris climate summit, she was among the recipients of the UN Equator Prize for outstanding achievements in sustainable development.

Members of the Prey Lang group suffer regular harassment from courts, police and soldiers, as well as local officials involved in the timber business, Global Witness said in a press release, adding that the environmental battle was "becoming increasingly murderous."

In 2012, prominent environmental activist Chut Wuthy was shot and killed in southwest Cambodia after leading two journalists to a nearby logging camp.

"Cambodia's forests have become like a piggy bank for Cambodia's elites and their cronies," said the group's campaigner Josie Cohen, accusing the influential figures of "routinely" flouting forest protection for profit.

Over the last fifteen years, the tree cover loss in the South Asian nation has "accelerated faster than in any other country in the world," he added, according to the release on the group's website. "This pits activists like Sopheak against powerful economic interests, often backed up by state forces.”

In February this year, Cambodian Prime Minister Hun Sen said he has authorized helicopters to fire rockets at illegal loggers. However, he offered no detail on identifying illegal loggers from the air.

The US Embassy in Phnom Penh says it has spent more than $100 million to combat deforestation in the Prey Lang Wildlife Sanctuary. But illegal activities continue apace.