Senegalese coastal villages are affected by climate change and overfishing. While many men leave to seek employment abroad, women often stay behind and try to adapt to life between rising sea levels and desertification. 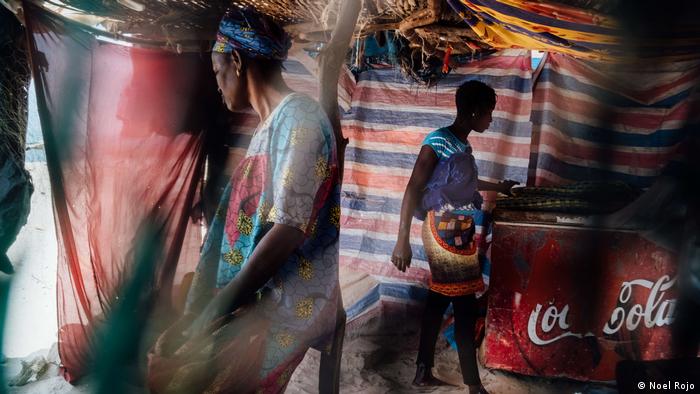 Almata Diagne and four of her six children have taken cover from the sun beneath a makeshift tent on the beach in Ndiebene Gandiol, western Senegal.

The oldest daughter, Magat, carries her 4-month-old sister in a shawl on her back while she helps her mother put the fish they've just bought from a middleman into a bucket. Later, Almata will take them to market in the larger town of Saint-Louis.

The average of roughly 10 euros ($11) a day she makes from selling the fish supplements what her husband Babacar Jo is able to send from his salary in Spain. He left for Europe in 2006, when Almata was married to someone else. After they divorced, she and Babacar were able to wed during one of his return visits to Gandiol, but even as man and wife, they rarely see each other. He spends most of the year in Spain, supporting not only his two wives and children but also his parents from afar. 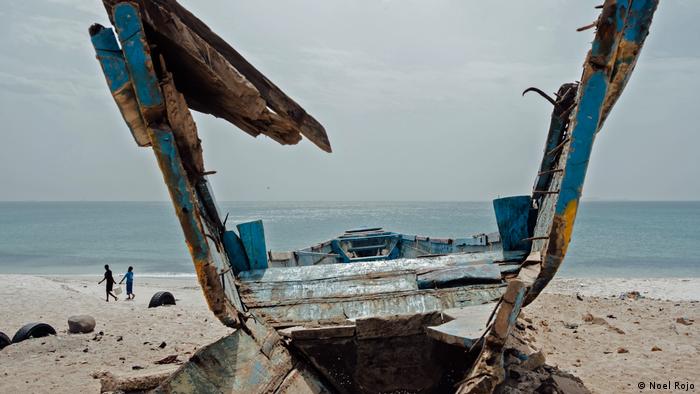 Fishermen from the coastline villages in Senegal have struggled to maintain their livelihoods in the face of overfishing and climate change. Like Almata's husband, Babacar, many have left their villages to seek work elsewhere.

"We receive about 30,000 West African CFA Francs (€46) from him every two to three months,” says Almata, adding that it's hard for him to earn enough money for everybody. She knows she cannot fully rely on him.

"Part of the Senegalese tradition is to support family members," says sociologist Oumoul Khaïry Coulibaly-Tandian, who has co-authored a study on the impacts of environmental change on migration in Senegal. "You have to give money to your mother or sister, even if they're not in need, just to respect tradition. The bonds are stronger with your own family than with your wife."

She told DW that women in rural areas understand they have to work, and "can't just be waiting for the money from their husbands."

Babacar is one of many men who left the small village of Ndiébène Gandiol, where the shoreline is now dotted with abandoned homes that were destroyed by flooding or erosion caused by rising sea levels.

Arona Fall, who works in the nearby national park, has seen the impact that climate change has had on the village.

"Nowadays, if you dig a well, it's hard to get fresh water. Before, this [part of the village] was a river, but now the river and the ocean have become one because of the rising sea levels."

Before he left, Babacar's livelihood, like that of most villagers, was fishing. Unused boats on the beaches serve as symbols of a defeated industry. Locals say there aren't enough fish anymore.

Some blame it on rising temperatures that have driven stocks to cooler waters in the north, while others attribute it to large foreign commercial boats that fish, sometimes illegally, in local waters.

Fish has long been the staple protein in Senegal. The collapse of fish stocks in recent years, reportedly by as much as80 percent in some areas, has led to increased food insecurity. Away from the water, the desert is encroaching further into the village, leaving those who live off the land with little to grow beyond onions and carrots. 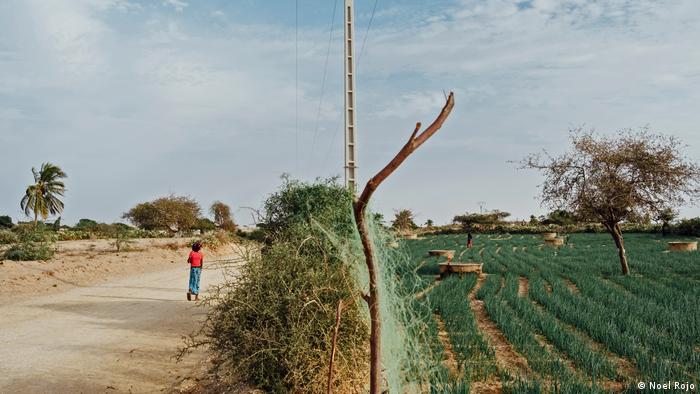 In the villages around Gandiol, people living off agriculture harvest onions, one of the few things that can still grow in the arid soil. The desert is increasingly encroaching on previously fertile land.

"I want to come back but I don't know when. As there are no fish in the ocean, I'd have nothing to do here,” Mamadou Diakhate told DW while visiting his wife and two children back home. Like Babacar, he was once a fisherman here, but now lives in Spain, which struck a 2006 deal with Senegal, allowing migrants to work legally. Many other men who saw no option but to leave, went to different African countries.

Thiaroye sur le Mer, a suburban area on the outskirts of the capital Dakar, is another place where the fishing industry has collapsed.

"Our community depends on fishing but we cannot compete with big, well-equipped foreign boats," says Yayi Bayam Diouf, a woman with experience of the dangers migrants face when they leave Senegal. Her son died on a boat trying to reach Europe. 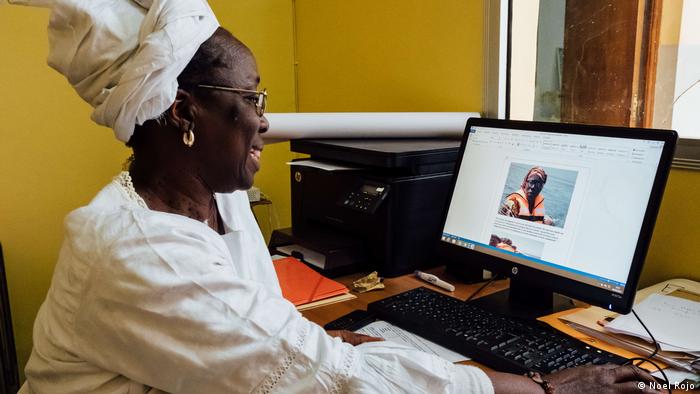 Yayi Diouf established an organisation to provide training and microloans for women affected by the migration of family members. The women learn new skills such as making soap or preserved fruit.

After his death, she established the Collective of Women for the Fight Against Illegal Migration in Senegal, which provides training and microloans for women affected adversely by the migration of family members. Those who take part can gain different skills, such as making soap or preserved fruit, thereby generating an income for their families.

As well as working with women, Yayi Bayam Diouf is also trying to convince potential migrants to stay in their home country, by talking to them about what life is like for Senegalese migrants in Europe.

"I tell them the truth. Often as many as eight share one room, they have no documents, they do not speak the language," she says.

She points out the alternatives to leaving: "With the money you need to get to Europe, you could establish a small business here in Senegal."

Such alternatives can work for some, but the fact remains that more than two-thirds of the Senegalese population still depends on agriculture and fishing, both of which are affected by rising temperatures and erratic weather patterns.

It's not a challenge restricted to Senegal, but rather part of a wider global trend. Recent findings by
researchers at the University of British Columbia outline how climate change could impact global fishing, predicting that millions around the world could lose their jobs and food source, and be forced to migrate if global temperatures exceed the 1.5 degrees Celsius rise of the Paris climate agreement. 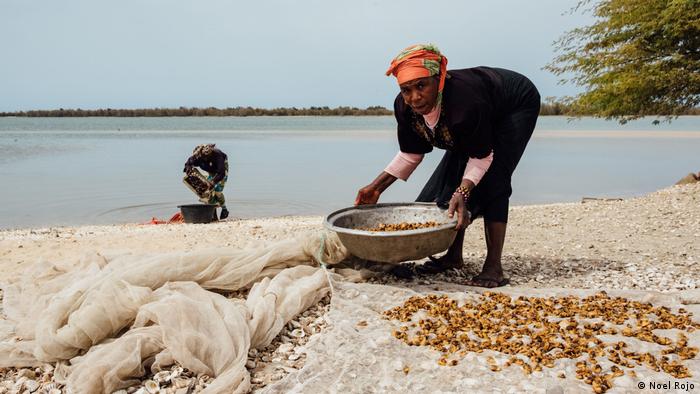 Women in the surrounding villages collect clams to sell. Today clams can be found further in land than they did in the past because of rising sea levels.

Sometimes Almata also joins women from local villages as they set off on small boats to look for clams, which rising sea levels have brought closer inland. She can sell them for around 3 euros a kilo.

Before she goes to the market, Almata takes a few minutes to rest on a step in front of her house. The midday heat has become unbearable. Magat, who dropped out of school a few years ago to take care of the household and the younger children while their mother works, has gone to fetch water.

Despite the uncertainty of the future, Almata hopes the next generation will still find opportunities. "The work I do is very hard, I'm often very tired. I don't want my kids to work like this, I want them to go to school and be successful," says Almata as she lifts a bucket of 20 kilos of fish onto her head.

The fish meal factories that dot West Africa's coastline and supply aquaculture industries in Europe and Asia are vying with locals for their fish staple. DW looks at the fallout in Senegal and Mauritania. (05.07.2018)

As ocean temperatures rise the fascinating animals are struggling to breed naturally. Could octopus farms help the animals survive?

Call for participants – training for female journalists in Yemen