A UN report on the state of world biodiversity for food and agriculture links rising food insecurity and chronic hunger to threatened habitats and ecosystems. But traditional female stewards of biodiversity offer hope. 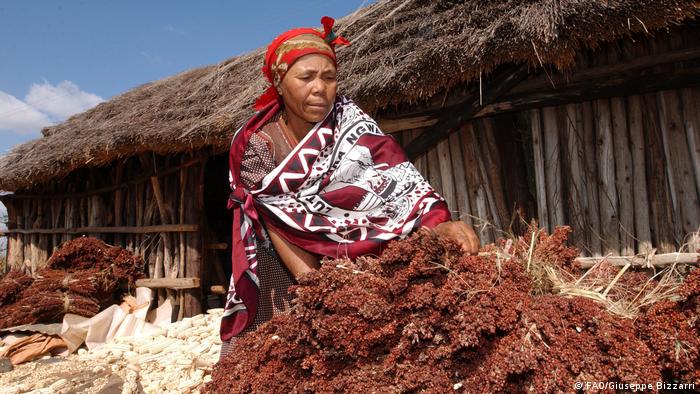 And while she's happy to also make peanut butter from the crop grown to feed her family, Cikenzi hopes any excess can be sold to help fund her children's education.

Women farmers in Zimbabwe have an intimate relationship with local seeds and plants that help to maintain biodiversity and bolster food security as the maize staple becomes increasingly vulnerable to recurring drought.

Yet female farmers remain marginalized from land ownership, quality soil and access to capital, and their work often goes unacknowledged.

"They couldn't even look at me in the eye," Gigi Manicad, the senior advisor of Oxfam's "Sowing Diversity = Harvesting Security" seed program, told DW of first working with some of these women a decade ago. 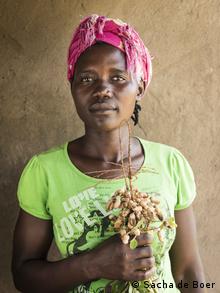 Zimbabwean farmer Miriam Cikenzi with some of the nuts she grows

But when Manicad recently saw these farmers being photographed as part of her program, something had changed: "I saw another part of them which I didn't recognize before."

Women who long saw themselves as "poor and insignificant" were now realizing, having been embraced as custodians of biodiversity for more sustainable food production, that they made a valuable contribution to "household security and community security," Manicad said.

"This gives them confidence that they matter."

50 percent of world's farmers are female

Women account for around half the agricultural labor force across much of the developing world, most especially in sub-Saharan Africa. These farmers, livestock keepers, fishers and forest managers are vital to promoting biodiversity for food and agriculture, says a landmark study by the UN Food and Agricultural Organization (FAO) released this week.

Five years in the making, "The State of the World's Biodiversity for Food and Agriculture" report is derived from the input of 91 countries on the status of biodiverse and sustainable food and agriculture systems that are undergoing a concerning decline. Biodiversity refers to the variety of living organisms whose interplay underpins life and ecosystems on earth.

Under threat are species that perform "vital ecosystem services," such as pollinators, pest enemies, soil organisms and wild food species. The report links this trend to multiple factors like rapid urbanization, over-exploitation of land and ocean resources and climate change. 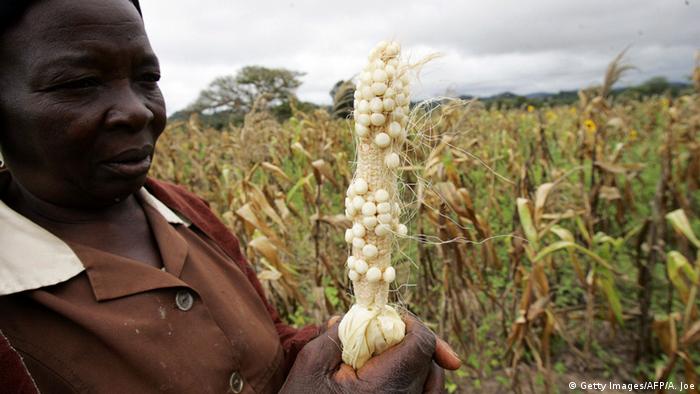 Zimbabwean farmer Mabel Zevezanayi holds a dried corn cob near Bikita, a former breadbasket that was stricken by drought in 2016

It also points to the impending depletion of food sources from livestock breeds facing extinction, to plant-based foods, to fish stocks. In 2015, over 33 percent of world stocks were being overfished and thus threatened, according to the FAO.

Custodians of biodiversity for food and agriculture

Many of the countries and organizations that contributed to the survey showed how women in the developing world have long been custodians of sustainable traditional agricultural practices that maintain biodiversity. ​​​​​​

In Cameroon for example, women in some rural communities "monitor the presence, growth and ripening of important wild foods and medicinal plants" in both forest and farm lands, and ensure that they are conserved. Many of these women are showing resilience to climate change through their knowledge, for instance, of wild food harvesting in times of food stress.

Oxfam's Gigi Manicad also notes that women in Zimbabwe use neglected and under-utilized species also known as "forgotten crops" in times of scarcity before the harvest.

This knowledge, passed down through generations, is a function of necessity due to women's marginalized status, especially in terms of land ownership and management. While women make up around a half of smallholder farmers in the developing world, less that 20 percent own land, according to the UN's food agency.

Women have essentially been forced to work sustainably with communal resources and to maintain diverse local ecosystems to be able to put enough food on the table for their families.

Small and diverse versus large-scale monoculture

"Humankind has throughout its entire history reduced biodiversity," Irene Hoffmann, Secretary, Commission on Genetic Resources for Food and Agriculture at FAO, told DW. 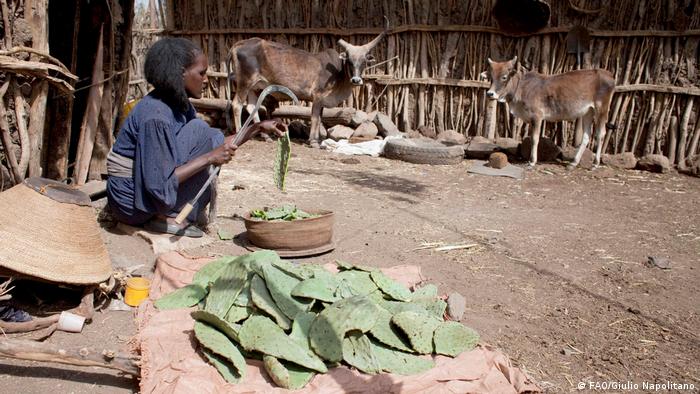 By way of example, Europe's biodiverse agricultural systems peaked around the 1750s "when you had relatively small-scale agriculture before intensification and artificial inputs came into place." Yet such systems still prevail in many developing countries.

"You have rather small fields, small holders, landscapes that are very heterogeneous," Hoffmann said.

Indeed, much of the world's biodiversity of food and agriculture (BFA) is regularly found among "smallholder cropping or mixed systems, pastoralist systems or small-scale forest, aquaculture or fishing systems," according to the FAO.

The UN agency estimates that of 570 million farms worldwide, 475 million are less than two hectares (roughly 5 acres) in area, yet only occupy 12 percent of total agricultural land. As a result, biodiversity for food and agriculture is gradually being shut out by large-scale monoculture farming. 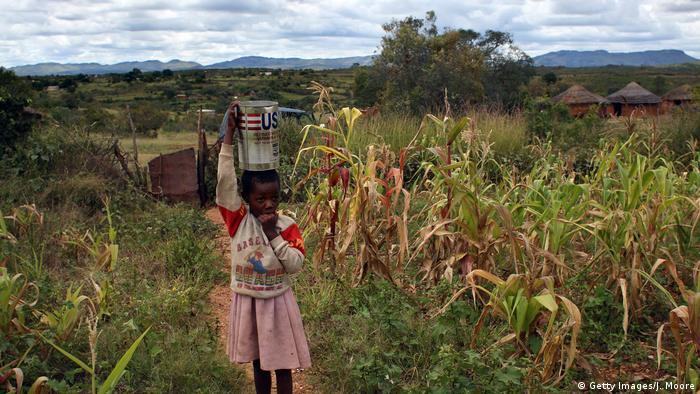 A small-scale subsistence farm in the village of Nhekiyana in central Zimbabwe, which were also revived due to commercial farming failures in the nation in the 2000s

While women are the fulcrum of the small, heterogeneous farms that make up 80 percent of the world's agriculture, their role in maintaining biodiversity still needs to be greatly enhanced, according to the report.

Market-orientated male farmers and landowners tend to use agriculture, not for food security, but for yield and profit. Meanwhile, women's singular knowledge and maintenance of diverse traditional crops, wild plant or livestock species, is underutilized due to complex cultural and legal reasons, land ownership and tenure. Patrilineal land rights systems in sub-Saharan Africa, for instance, often exclude women.

Without access to land and other productive resources, women may overuse wild foods, or are tempted to forego diverse local crop varieties to buy cheaper alternatives like rice in their attempt to feed their families, notes Irene Hoffmann, who has worked with female farmers in West Africa.

In this way, land tenure reforms in Rwanda, for example, have reduced barriers to land ownership and "have led to a significant increase in soil conservation investment by female-headed households," writes Cristiana Pasca Palmer, executive secretary of the UN Biodiversity Convention. 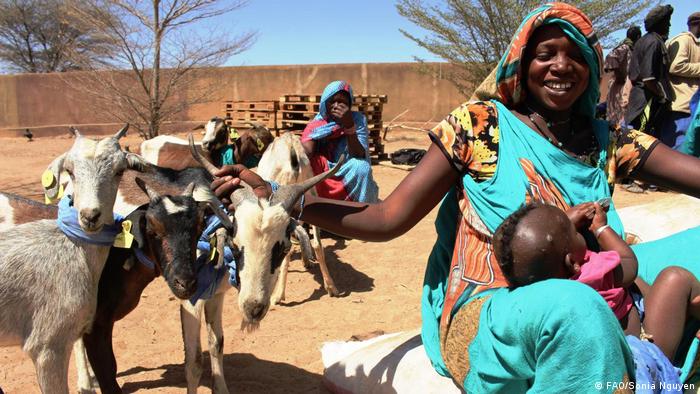 The fact that the number of female household heads is rapidly increasing in sub-Saharan Africa due in part to HIV and migration – roughly 70 percent in the districts of Zimbabwe where Manicad and Oxfam work - reemphasizes the need to empower women to manage BFA.

Through their deep knowledge of local plants and grains, empowered women can better respond to food shortages caused by climate change-induced drought and erratic rainfall. Nutritious and climate resistant strains include millet, sorghum and "wild greens" that Manicad says are often "stigmatized" as weeds. Moreover, these diverse species can ultimately be used to fight pest-resistant strains elsewhere.

"Many women have an encyclopaedic knowledge of identifying these crops," Manicad says of women in Zimbabwe who can point out hundreds of edible plant varieties.

In many instances, this "knowledge intensive" understanding of the local food landscape, helped by a highly nuanced appreciation of regional weather patterns, has been lost by male farmers who Manicad says are often focused on commercialized crops that contribute to biodiversity loss.

It's why consensus is growing that, if declining biodiversity for food and agriculture is to be remedied, women's vital yet undervalued role in agriculture needs to be fostered and elevated in communities worldwide.

The WWF has published its biennial report on the state of life on Earth and the threats to it. Digging into the data, we highlight what you need know about the state of the planet's animals. (30.10.2018)

Chaotic land reforms, drought and lack of financing have made it difficult for Zimbabwe's small-holder farmers to get ahead. Increased focus on funding irrigation schemes is hoping to change that. (08.12.2018)