The collapse of fisheries, decline of coral reefs and drought are all hitting Madagascar hard. But fishermen are coping with scarce and stressed resources in the Indian Ocean by coming up with new alternatives.

Landing his wooden canoe on the coral-sand coast of Madagascar, just a few steps from his home, fisherman Samba Lahy recalls his childhood: "I started fishing with my parents when I was 18," he told DW. "We used to return home with the pirogue packed with fish."

Today, life in Tampolove - a small village in the south of Madagascar - has changed for Lahy and his family. "Resources are rare," he said. For 1 kilogram (2.2 pounds) of fish per day, fisherman can earn $1 (.87 euros). "On lucky days, a catch goes up to 20 kilograms," Lahy explained. 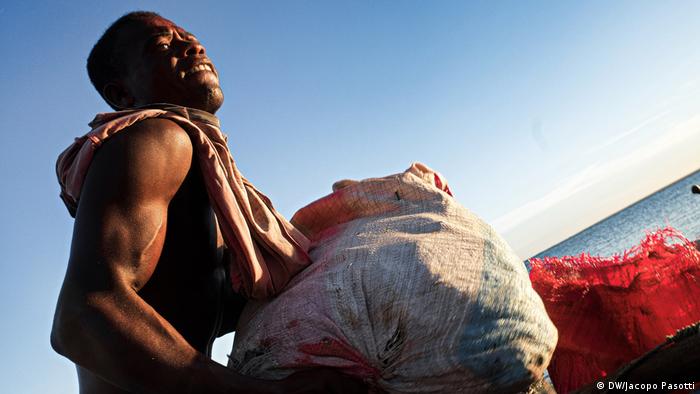 Fish stocks around the world are being put at risk by climate change, overexploitation, pollution and habitat destruction.

In Madagascar, this is particularly worrying, as fishing contributes more than 7 percent of the national gross domestic product - and is the backbone of the economy in rural areas.

Fish are also the main source of protein for coastal populations.

In the face of looming food insecurity, Madagascar's fishers are getting creative in their quest for alternatives.

Farmers and fishers in trouble

If fisheries continue to decline rapidly, it could have a serious effect in Madagascar, leading to further food shortages and economic problems in one of the poorest countries in Africa.

Compounding this are the effects of climate change, which people are experiencing across the country. Long-lasting drought has led to failing harvests, leaving 850,000 people in a state of severe hunger. As a result, starving families from inland communities have been forced to move to the coast - putting increased pressure on coastal resources. 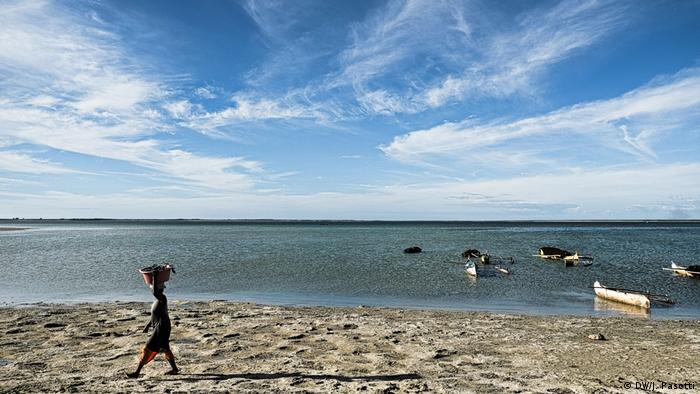 The changing climate has put major pressure on communities across Madagascar

Add to the equation that coastal communities like Tampolove are experiencing changing weather patterns. "We are well into the rainy season, but have yet to receive rain," said Richard Badouraly, president of the aquaculture community in Tampolove. "Both farmers and fishers are in trouble."

Gildas Todinanahary, of the Institute of Fisheries and Marine Science, University of Toliara, warns that fisheries in Madagascar are further threatened by declining coral reefs.

"Over the past 50 years, 65 percent of the corals of reef off the coast of Toliara have died," he said. 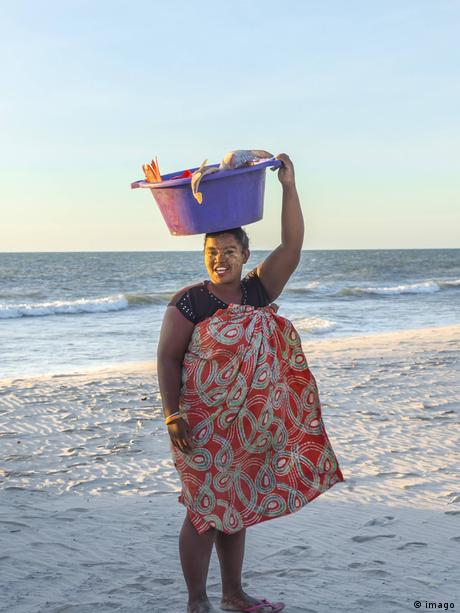 Living from the sea also means living with the sea

To prevent ecosystems from collapsing, the Velondriake - an association of several villages all falling within the same marine protected area - was created by the government.

The name means "to live with the sea," and the program is managed by locals. "Fishers understood that they needed to look for alternatives to fishing," said community leader Badouraly.

The marine reserve stretches over 1,000 square kilometers (386 square miles) along the coast of Madagascar, and includes a total population of 7,500 people.

Thanks to PACP (Projet d'Appui aux Communautés de Pêcheurs), local people manage much of the project, both governing and establishing alternative activities in the reserves.

Thus, villagers have become both managers and guardians of their own coasts. Management decisions are discussed and agreed upon as a community. 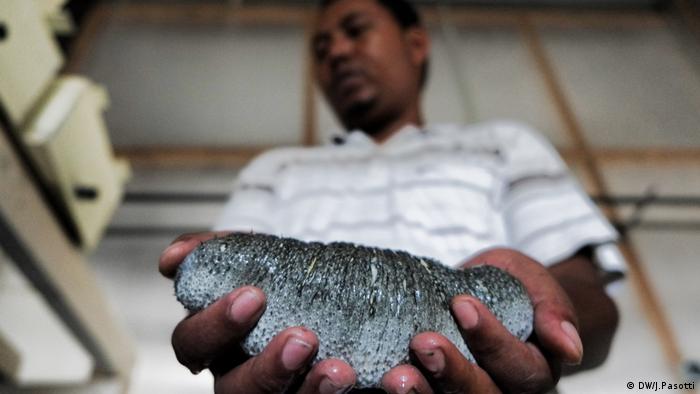 In Tampolove, where people's diet consists mainly of fish and rice, fishers have started farming seaweed.

With the support of Blue Ventures, a UK-based marine conservation group, the Wildlife Conservation Society, and the University of Toliara, the village has started to grow seaweed for the European market.

In the last few years, the community has also begun testing the cultivation of sea cucumbers (Holoturia scabra), and of elkhorn sea moss (Kappaphycus alvarezii). Sea moss is a type of red algae, from which carrageenan - a gel used in the food and cosmetic industry - is extracted. 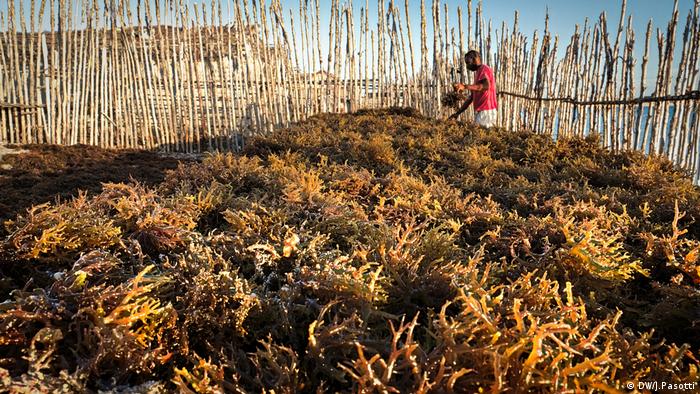 Worried about declining fish stocks, some farmers have turned to harvesting seaweed

Family life is also being affected. Women have been financially liberated since becoming the main algae farmers, often working with men, many of whom remain fishers. As a result, the birth rate in the area has decreased.

Next, the community is looking to cash in on sea cucumbers, which have high commercial value. And the fishers are even investigating whether coral and seahorses can also be farmed.

But Todinanahary points out that the real natural riches are in the community. "When we say as scientists, as the government: You should change the way you live - they will give us the solution themselves." 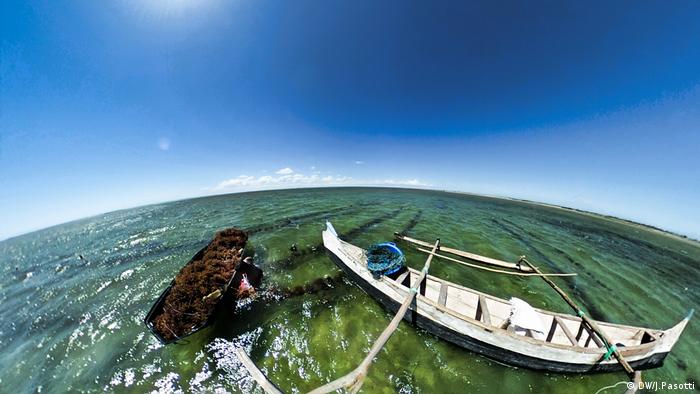 Seaweed is harvested at low tide in the vast lagoon

This story is part 2 in the two-part series of the Shared Horizons journalism project, which focuses on community-based management of resources as a tool to adapt to changes in the environment. Funding support was provided by the Innovation in Development Reporting Grant Program, operated by the European Journalism Center.

Read part 1: How Mongolia's nomads are adapting to climate change

Fishing for success in Madagascar

Declaring sections of the ocean off-limits through marine protected areas isn't effective without a means to enforce fishing bans. Blue Ventures believes a market-based approach to conservation could be the answer. (01.09.2015)

In Bengal's mangrove forests, the effects of climate change are forcing men to leave their families in search of work. But now, seaweed farming is offering the women left behind financial stability and empowerment. (25.11.2015)

Conserving our seas is a must. As awareness of the problems facing ocean wildlife and habitat grows, so to do the number of marine protected areas. Albeit slowly. Click or swipe through our gallery to learn more. (28.10.2016)