Compensation for Doped East German Athletes | News and current affairs from Germany and around the world | DW | 17.11.2001

After being pumped with performance enhancing drugs for years on end, former East German athletes are finally being financially compensated. But they still have to live with the damaging side-effects. 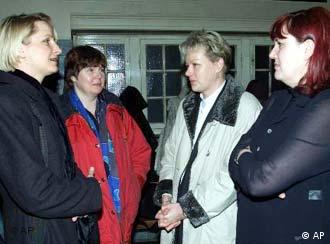 German parliamentarians reached a landmark agreement on Friday to set up a fund of four million marks ($1.81 million) for the victims of former East Germany’s systematic doping policy.

"This is the first financial contribution to the solution of a problem the previous government failed to deal with", Dagmar Freitag, spokeswoman on sports policy for the ruling Social Democrats parliamentary party said.

Once known for its superior athlethes and sportsmen, former East Germany was tainted once the lid was blown off its notorious doping program in the 1990s after the state disintegrated.

Steroid use reached a all time high during the cold war when international sport events took on ideological undertones.

During the 1970s and 80s, East Germany's huge doping program produced thousands of highly successful, but oddly mannish female swimmers and track stars. They were pumped with performance-enhancing drugs as part of East German efforts to use sport to promote the communist state.

Ever since the scandal came to light in 1989, a number of East Germany's most powerful sports officials have been convicted of charges of systematic abuse of steroids in athletics.

Several athletes and swimmers testified during the trials, saying they had suffered serious health problems as a result of their often unwitting use of anabolic steroids.

But more than 20 years after being doped without their knowledge as children in East Germany's elite sports schools, several East German athletes are still coming to terms with the crippling side-effects.

As a result of the testosterone they unwittingly consumed as girls, many female athletes say they have developed deep voices, excessive body hair, and hormonal imbalances. Several blame the steroids for miscarriages and birth defects in their children.

One of the most extraordinary cases was that of Heidi Krieger. European shot-put champion in 1986, she claimed that she had to undergo a sex change operation as a result of the male hormones she was given during training in the 1980s.

The German Sport Federation (DSB) and the German Olympic Committee (NOK) are also expected to take part in the compensation programme.

Klaus Riegert of the opposition Christian Democrats, said he now expected the German Sport Federation (DSB) and the German Olympic Committee (NOK) to take part in the compensation programme. He suggested the pharmaceutical industry should also get involved.