As part of efforts to combat climate change, a majority of Germans say they're in favor of scaling down or completely abandoning their Christmas lights this year, according to a new survey. 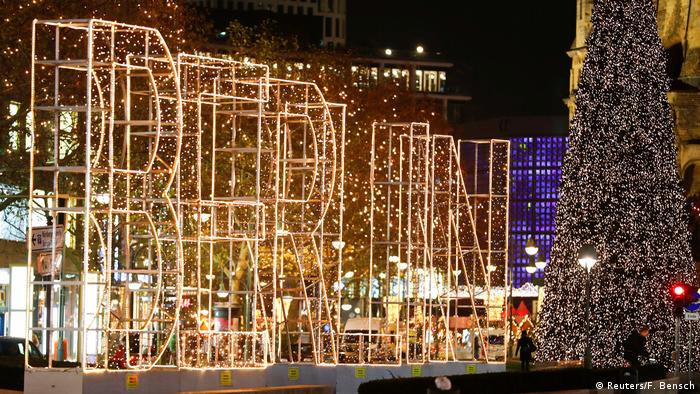 A majority of Germans say they would consider scaling down their Christmas lights to protect the climate, a survey released on Sunday said. A total of 57% of those surveyed said they would reduce Christmas lighting or even do without it in the future, according to the survey conducted by YouGov on behalf of the German news agency DPA.

Of the respondents, 11% said they would make do without any lights this year due to climate concerns, while 10% said they would do so in the future. But 35% said turning off the lights was not an option for them.

Opinion is split on whether there should be fewer lights on buildings and in the streets in general, with 44% both for and against the idea. Having lights up during the festive season is appreciated by a large majority of 79% in Germany. Almost seven out of 10 people surveyed plan to decorate their homes with electric Christmas lights this year.

Christmas lights are a common feature during the festival season every year, with the lights wrapped around homes, streets and trees. But scientists have warned that the lighting does have an environmental cost.

Combating climate change has been high on the global agenda, thanks in part to the activism of Swedish environmental campaigner Greta Thunberg.

Read more: 'Total economic transformation' — getting from here to there on climate change

Currently, representatives from all over the world are meeting in Madrid for the United Nations COP25 climate conference to discuss measures to decrease carbon emissions as part of the 2015 Paris Agreement.

Unless global greenhouse gas emissions fall by 7.6% every year, the world will fail to meet the 1.5°C temperature goal of the Paris Agreement, a report from the UN Environment Program warned in November.

Paris is already glittering in the festive glow

In the weeks before Christmas, many cities invite visitors to stroll on festively lit boulevards and squares. The French capital has already turned on the lights. (23.11.2018)

The biggest Christmas tree in the world