Don′t buy a Christmas tree, plant one | Environment| All topics from climate change to conservation | DW | 21.12.2018

The Christmas Trees for the Forest initiative aims to save threatened woodlands during the festive season by encouraging people to donate a Christmas tree to the forests — instead of cutting one down. 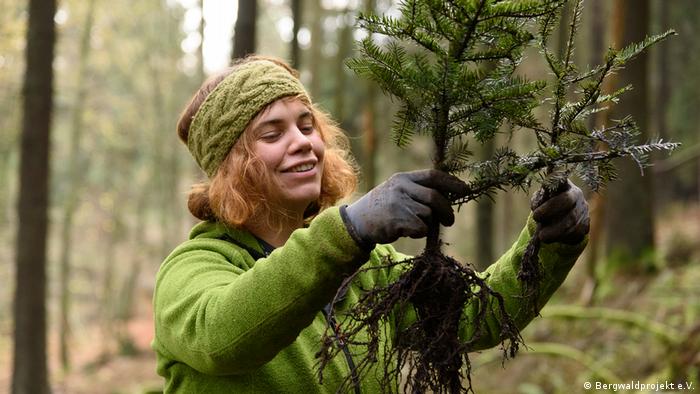 "Buy trees instead of gifts," insists Swiss-based Bergwaldprojekt (Mountain Forest Project). The organization wants to bolster native forests that have suffered an unseasonably long and dry summer — due in part to climate change.

Despite the fact that traditional Christmas tree plantations are also struggling to survive this year, 27 million trees will be cut down and decorated in homes across Germany.

When the holiday season is over, most will end up in landfills — and will emit climate change-inducing carbon instead of sequestering it as they would in living forests.

It seems that whichever kind of Christmas tree you choose, real or plastic, it comes with an environmental footprint.

Unlike locally grown trees, the plastic variety are usually imported from across the planet, entailing plenty of emissions from transport; plus they're made of non-biodegradable PVC and — unlike small conifers — are difficult to recycle.

One sustainable alternative floated in recent years is renting, but even then delivery means there are transport emissions to worry about.

Keep it in the ground

The only way to offset the cultural yearning for Christmas trees in Germany and elsewhere might be to plant a tree.

With its Christmas Trees for the Forest initiative, the Bergwaldprojekt will do the planting for you for only €17 ($19.30) — and also ensure the tree's ongoing maintenance and protection.

"With our tree donation you make family, friends or colleagues a special Christmas present that does not consume more resources but benefits the forest," promises the woodland conservation organization.

Following months of drought in Germany, Christmas tree growth has suffered in plantation forests that struggle to adapt to the dry soils and lack of rainfall.

Crops have been severely depleted, with up to 30 percent of the Christmas tree crop failing in the state of North Rhine-Westphalia alone. Christmas trees for a sustainable future

The German Association of Christmas Tree Growers has acknowledged that shortage of rain has affected tree size, price and availability.

"In some places, it hardly rained between April and October," the organization says on its website. "The soils are extremely dry in these places."

Still, the association adds that popular imported varieties such as the Nordmann fir — which originates in the Caucasus where long, dry summers are the norm — can better endure such conditions, thanks to its deep taproots.

The Bergwaldprojekt, however, would rather see local trees given a chance. 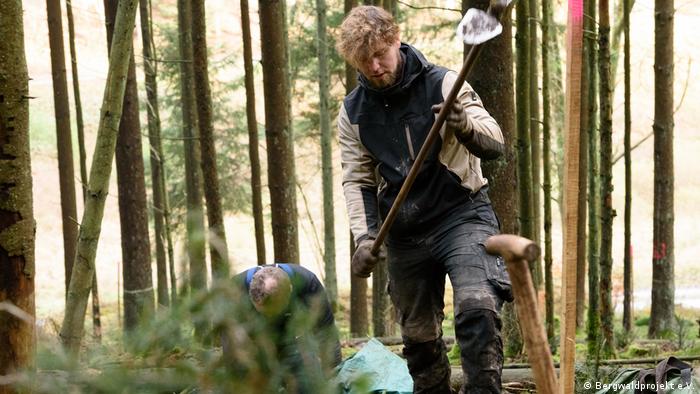 Sponsored Christmas trees will be part of this effort.

According to a 2017 report by researchers at the Center for Integrative Biodiversity Research in Leipzig, mixed native forests are more climate resistant, and therefore have the best chance of surviving in a warming world.

And that's not the only disadvantage of monocultures. Naumann says biodiversity is essential for self-regulating forests that don't need pesticides like  glyphosate.

"The production of Christmas trees from plantations is not sustainable because native species are not planted that might play an important role for biotopes or weed control," Naumann said.

Wood for the trees

The Association of Christmas Tree Growers insists its members use few chemical herbicides since sheep eat most of the weeds on German plantations.

Meanwhile, due to the long production period of nine to 10 years, an ecosystem of sorts is created "for many living things and plants," the association's website claims.

While Christmas tree growers imply that glyphosate use is minimal, or that imported species can help fight climate change, Naumann insists that monoculture is not a sustainable forest model for the roughly 30 million trees cut annually.

"The production of Christmas trees is only sustainable if customers go back to spruces, silver firs and pines from native forests, because these trees are cut down as part of the near-natural forest management and are not taken from plantations," he said.

Of course, donating a tree to such a mixed forest will also help the cause this Christmas.

Trees with character - for a very biodiverse Christmas

What if cutting down your Christmas tree were good for biodiversity? Grown without fertilizers or pesticides, here's an eco-friendly alternative to the mass-produced trees we're used to from plantations. (22.12.2016)

The "Bergwald" or "Mountain Forest Project" works with volunteers to protect Germany's woodland, which is under threat from pollution. The initiative raises awareness of environmental dangers. (19.05.2016)

Working together to save Germany's forests