′Total economic transformation′ — getting from here to there on climate change | Business | Economy and finance news from a German perspective | DW | 28.11.2019

'Total economic transformation' — getting from here to there on climate change

The climate impact of economic growth is putting the ability to live at risk. But growth is also necessary to improve living standards, especially in poorer nations. Experts say there is a way out of the downward spiral. 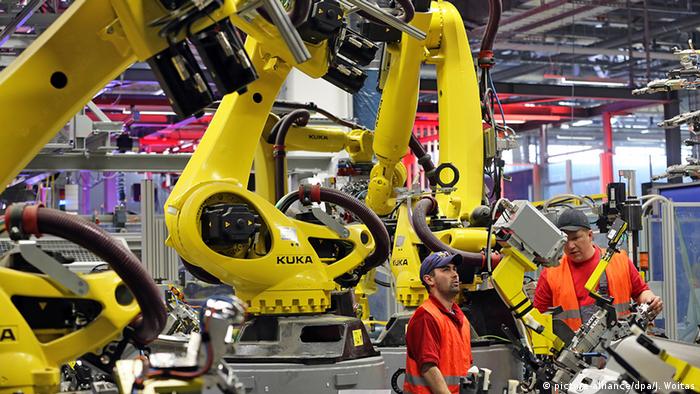 In his 2012 science fiction novel, "News From Gardenia," author Robert Llewellyn peers into a world that turns out OK. Humans live harmoniously with the natural environment around them. Heavy-handed capitalism appears to have collapsed, replaced by a local exchange of goods and services. Communities seem healthier and happier, but it's a nonspecific global catastrophe in the story's history that forced the change.

The narrative arc is one Greta Thunberg might subscribe to. Economic growth is a "fairy tale" killing the planet, she said in September. Slow down by choice now, she told leaders at the UN Climate Action Summit, or climate change will force us to — maybe sooner rather than later.

Underscoring her point, Thunberg's Fridays For Future movement is calling for a Buy Nothing Day on November 29, Black Friday, a post-Thanksgiving commercial tradition in the US that kicks off the Christmas shopping season.

To grow or not to grow

For the majority of economists, however, a low- or no-growth solution to climate change is not a serious one, and certainly not one applicable on a global scale.

"The Greta camp is very much an advanced economy phenomenon," Adam Tooze, a history of economics professor at Columbia University, told DW. "It's within the realm of reasonable politics for advanced economies to say we need no further growth."

Not so for poorer and developing economies, which face a "genuine hard choice" between meeting "existential human needs" — such as clean water, sanitation and medical care — and pursuing the rapid decarbonization necessary to meet Paris Agreement targets on global warming.

That puts most of the decarbonization burden on rich countries, Tooze said, where the challenge is a less formidable, but by no means easy matter of technology and politics. Instead of a radical shift to no growth, economists like Tooze advocate pulling existing levers of global capitalism to achieve growth without the carbon footprint.

One such lever is central banks, which Tooze argues could design monetary policy that favors climate solutions like renewables, battery technology and carbon capture on a large scale, while making dirty investments less attractive.

With quantitative easing (QE) back in the central bank toolbox for spurring sluggish economies, Tooze wants the European Central Bank to "commit to buying as many green bonds as it can without crowding out private investors," he said. "There is really no case for central banks or managers of foreign exchange reserves to still be underwriting a fossil fuels status quo, which we know is not sustainable."

The idea ruffles the feathers of some central bankers, especially Germany's Bundesbank, which is opposed to QE more broadly and "very critical" of so-called green QE. "Our mandate is price stability, and market neutrality is fundamental to implementing our monetary policy," Bundesbank President Jens Weidmann said last month at a central bank meeting in Frankfurt.

In other words, it's the job of politicians, not central banks, to put their thumb on the scale, tilting trillions of dollars of capital toward slowing global warming.

Other financial institutions are less skittish. Earlier this month, the European Investment Bank announced it would cease supporting fossil fuel projects by the end of 2021. That would direct about €2 billion ($2.2 billion) of annual EU financing away from hydrocarbons.

Climate finance analysts welcomed the EIB decision, while noting how much more needs to be done. Total global climate finance reached $612 billion in 2017, a record, before falling to $546 billion in 2018, according to an annual report released this month by Climate Policy Initiative, which advises green investment.

The research group estimates as much as $3.8 trillion is needed every year to achieve Paris climate goals.

"It's just not enough," Barbara Buchner, CPI's climate finance director, told DW. "But setting aside just a couple percentage points of total investment for climate action would get us much further."

Buchner wants to see "total economic transformation," which first and foremost means ending coal, electrifying transport, and producing and distributing enough renewable energy to ensure that electricity is carbon-free. The technology exists, she said, or could soon, given sufficient incentive to invest in large-scale research and development.

The case for growth

That kind of transformation has happened before, Ashoka Mody told DW. The Princeton University economist rests his hope for climate-neutral economic growth partly, and perhaps ironically, on the historical turning point that kicked off climate change to begin with: the Industrial Revolution. Then, as now, the global economic system fundamentally changed; and then, as now, the transition produced winners who profited, and losers who needed compensation.

Mody's comparison, however, comes with a caveat: Without an existential threat looming, the Industrial Revolution of the 19th century developed as technology and business practices evolved. Adoption was more organic.

The rapid rise in global temperature, as foreseen in the 2018 IPCC report, means "we cannot afford to wait," he said, adding "government intervention needs to be a lot more aggressive."

While there is broad agreement that both a serious tax on carbon and strong regulation are necessary, Mody is mostly a proponent of the latter. "Regulations work. Restrictions lead to innovation," he said, citing the Clean Water Act from 1972 as one example, which forced US industry to find ways to limit water pollution and stay profitable.

For Mody, the question is not if the economy can grow, but how, because "so many people are still desperately poor." At its most basic level, economic growth is what allows children to do better than their parents, he said. Without growth, people will "lose the incentive to participate in civic life."