Thanks, in part, to Greta Thunberg's activism, combating climate change is now at the top of the global agenda. But environmentalists doubt much progress will be made in Madrid as the climate conference kicks off. 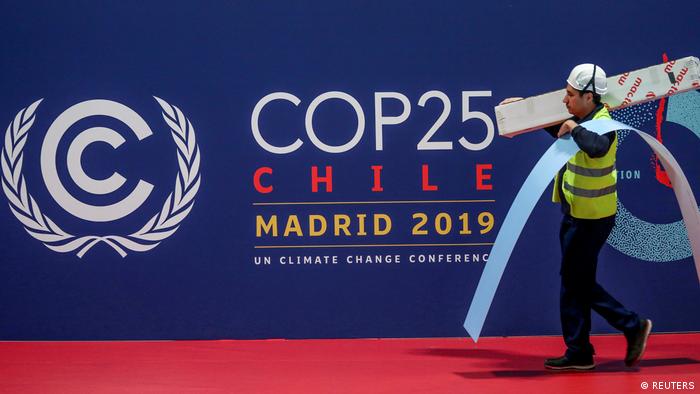 Swedish environmental activist Greta Thunberg had set off for the 2019 UN Climate Change Conference (COP25) in Chile. But then the summit was moved to Madrid due to political unrest in Chile, forcing Thunberg to return to Europe. Now she's aboard a sailing ship, hoping to arrive in Portugal shortly and then travel onward to Madrid for the conference. Progress, however, is slower than expected, the teen activist said.

The pace is in line with that of the climate conference in Madrid, which starts Monday.

Spain steps up to the plate 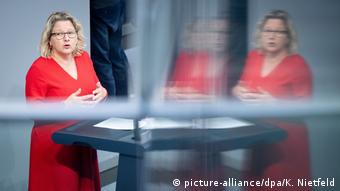 German Environment Minister Svenja Schulze, who will attend, said she is pleased the conference will go ahead after Chile pulled out as the host nation. Speaking to DW, she said, "I am very thankful to Spain for hosting the COP at such short notice."

She added that it is a huge sign of solidarity that Spain will put up between 20,000 and 25,000 people within four weeks. According to Schulze, the conference will only be a success if the countries show greater ambition and "go beyond what they have promised so far."

US withdraws from Paris Agreement

More than what the 190 countries that attended the 2015 Paris climate conference pledged to strengthen global efforts to tackle climate change. Back then, they had agreed to keep the "global temperature rise this century well below 2 degrees Celsius above pre-industrial levels." Yet to reach this target, states already need to adapt their respective climate policies, with scientists warning that climate change is accelerating. But it is unlikely that the Madrid summit will yield more ambitious climate targets.

So far, only a handful of African and Asian states have indicated they want more far-reaching climate measures. And in early November, US President Donald Trump, who does not believe climate change is real, pulled out of the Paris Agreement.

German Foreign Minister Heiko Maas, meanwhile, pointed out that "we deeply regret this move," saying he hopes the US will eventually return to climate talks. But, he said, one cannot expect that a climate consensus will be reached anytime soon.

"We can hardly expect any climate-related progress next year when the US hosts the G7 summit and Saudi Arabia holds the G20 presidency," said Maas. Brazilian right-wing populist President Jair Bolsonaro, incidentally, is not known for being particularly environmentally minded, either. 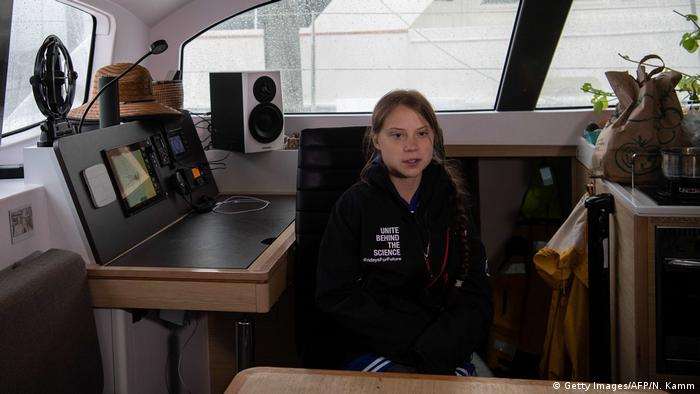 Greta Thunberg has set sail for Europe for the climate summit

Yet Germany, too, has not delivered on its promise to cut greenhouse gas emissions by 40% by 2020. Many experts say the country's plan to shut down coal-fired power plants by 2038 is too timid. Moreover, transport-related emissions have been rising for many years. That is why environmental groups are hoping the global climate protests will create some momentum that will carry over into the summit.

Speaking to DW, Ann-Kathrin Schneider of Germany's Environmental and Nature Conservation Association (BUND), said: "The pressure from street protests, especially those happening on Fridays, will matter."

But Schneider also remained cautious, saying it is not at all clear if this will translate into political momentum to do more to protect the environment. 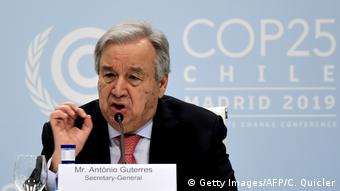 UN Secretary General Antonio Guterres: "The point of no return is no longer over the horizon. It is in sight and is hurtling towards us"

Environmental groups are also hoping there will be progress with regard to compensating poorer countries for environmental damage resulting from climate change — an issue that has received little attention at previous climate conferences. Sabine Minninger, a climate expert with Bread for the World, told DW that the world's rich nations are keen to avoid this topic, fearing they will be asked to issue a kind of blank cheque to compensate for all damage incurred through extreme weather events.

But Minninger says this issue is of great significance, as "very poor states, in particular, struggle tremendously to get back on their feet after suffering natural disasters or extreme weather events; the reasons is that they lack the financial resources and therefore the means to protect their lives and the foundation of the livelihoods."

These countries, she says, have a hard time recovering because "they struggle to secure reasonable loans to adapt to climate change." Another important issue to be addressed in Madrid, meanwhile, will be the protection of the oceans.

Much work, therefore, lies ahead. Who knows, maybe Greta Thunberg's efforts to draw attention to these challenges will help convince some countries to agree to more ambitious climate targets after all.

The UN's meteorological agency has said CO2 levels are accelerating at the highest rate on record and showing "no sign of a slowdown." The report comes one week ahead of a UN climate summit in Madrid. (25.11.2019)