The teenage Swedish climate activist has arrived in Lisbon after making her second boat trip across the Atlantic in four months. She is expected to attend a demonstration at the COP25 climate conference in Madrid. 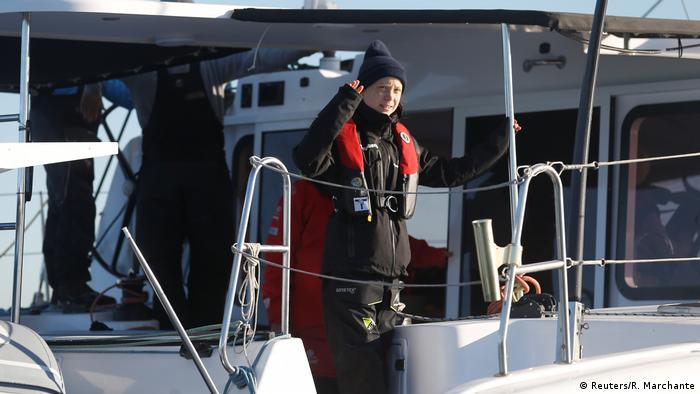 The La Vagabonde catamaran carrying Swedish climate activist Greta Thunberg arrived in Lisbon on Tuesday ahead of a Friday climate demonstration at the COP25 climate conference in Madrid.

Thunberg, 16, whose "climate strike" protest outside the Swedish parliament in Stockholm inspired a global Fridays for Future protest movement, was greeted by Lisbon Mayor Fernando Medina upon arrival at the Doca de Santo Amaro port.

Thunberg, who avoids air travel as a means of protecting the environment, had journeyed to America to attend the annual COP25 climate summit in Chile, but the event was moved to Madrid due to unrest in the South American country.

Spain's Environment Minister Teresa Ribera said last month that the government would help the Swedish activist to get to the climate conference in the country's capital in time.

It was her second round-trip sea voyage across the Atlantic in four months. Her first was to attend a UN climate summit in New York in September.

The COP25 summit in Madrid opened on Monday, with 200 countries pledging a "green revolution" on the first day. Thunberg intends to attend the demonstration at the conference on Friday.

Carbon markets could help nations raise ambitions in setting goals that will keep temperature rise below 2 degrees Celsius, in line with the Paris Agreement. But skeptics say they risk ruining the historic accord. (02.12.2019)