Clash in German forest as red line is crossed | Environment | All topics from climate change to conservation | DW | 01.12.2016

Logging has begun in Hambach Forest, where activists have sought for years to protect ancient trees - which grow over coal coveted by German power company RWE. Under heavy police presence, the fight is about to get real. 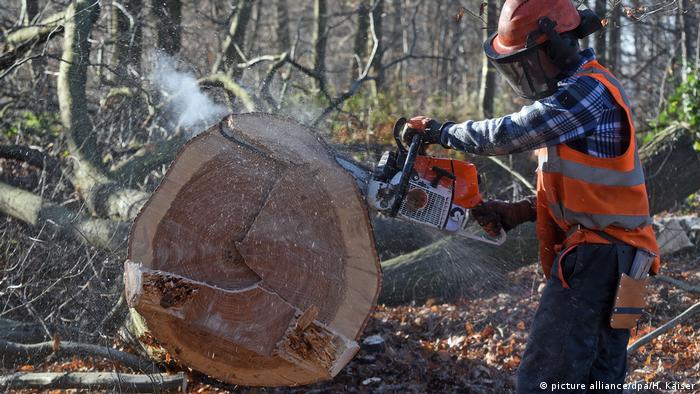 The old and mighty Hambach Forest, an ancient woodlands in Germany that lies between the cities of Cologne and Aachen, has been an environmental battlefield for years. On one side, young activists living in trailers and tree houses are fighting to save the forest. On the other, Germany's second-largest electricity producer RWE is trying to clear it.

And technically, they are allowed to do so. RWE bought the forest in the 1970s so that coal can be dug out of there at neighboring Hambach, Germany's largest open-pit lignite mine.

But the highly coveted coal deposits lie beneath the 12,000-year-old forest, whose trees have been chopped down for decades to make space for coal diggers. Only a fourth of the original forest, which used to cover 5,500 hectares, is left. The open-pit lignite mine has even swallowed entire villages. 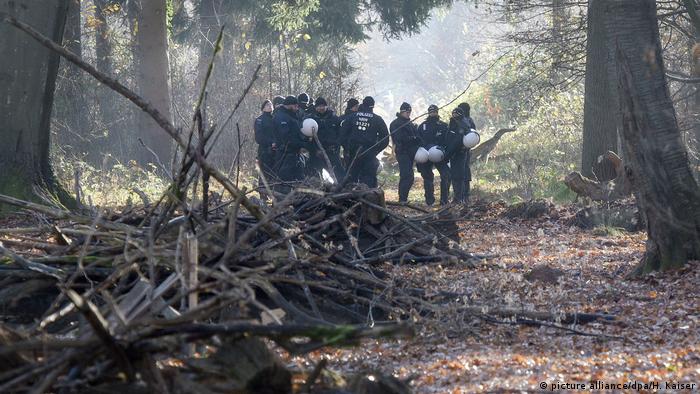 Now the battle is getting real, since RWE's diggers have crossed a sensitive spot for the very first time: The old A4 autobahn, which has been defined as a red line by anti-coal mine activists and citizens' initiatives.

For more than four years, about 30 activists have occupied trees in this part of the forest. They've built a permanent camp, and many even sleep in tree houses every night to protect the trees - because those occupied cannot be chopped down with the people in them.

In the eyes of the activists, RWE crossing the "red line" is not just a provocation and an intrusion into their habitat. It also means passing over a symbolic border, one that stood for dialogue and peace talks.

A month ago, more than a thousand people from neighboring villages came together at this very line to form a human chain that was 2 kilometers (1.2 miles) long. Their message was: up to here and not a step further, enough with the logging already.

It was the largest protest against the clearing of Hambach Forest in years, and it led to negotiations with RWE. The energy supplier was asked to stop clearing forest for coal mining south of the red line.

But now that the diggers have crossed this line, activists say RWE has officially pulled out of the peace talks. And so the battle that's been going on for years has reached a new dimension - with the largest police presence that the ancient forest has ever seen. 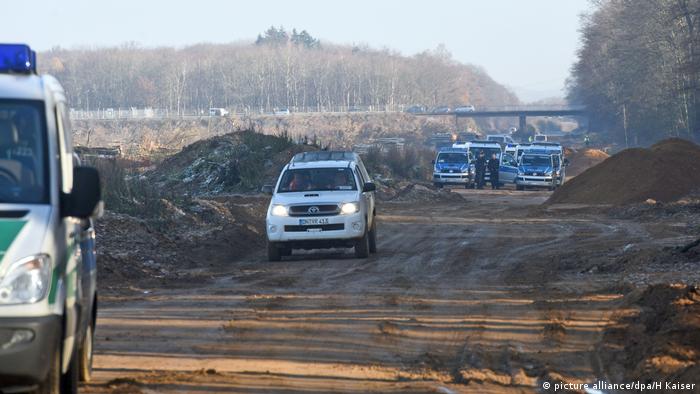 "We counted about 75 police cars and there is a helicopter flying over our heads all the time," says one of the activists, who wants to be called Joe for his own protection.

The 24-year-old has been living in the Hambach Forst for half a year now. "I've never seen anything like this here," Joe told DW. "There's even an armored truck."

"There is a lot of state authority protecting RWE right now - patrolling the forest, searching people, handing out bans on returning to a particular site," he says while a police helicopter whirs overhead.

"We're here to enable logging activities and to prevent RWE employees and machines from getting attacked," says Sandra Schmitz, spokesperson of the police department in Aachen, which is responsible for the Hambach Forest.

"We have a legal order to avert danger and to prosecute criminals - and that applies to all people and all institutions," Schmitz told DW. "In past years, the protests have escalated to the point that RWE cannot do its work without police protection anymore," she adds.

Asked how dangerous these activists really are, Schmitz replies by saying she doesn't like using the term activists. "We regard people who throw stones and Molotov cocktails as criminals. They are not afraid to use violence. And we have to stop that."

A few days ago, a RWE employee was hit by a stone, causing a head wound and a road accident that injured several other RWE employees, according to the police. As of now, four people have been slightly injured since the red line was crossed. 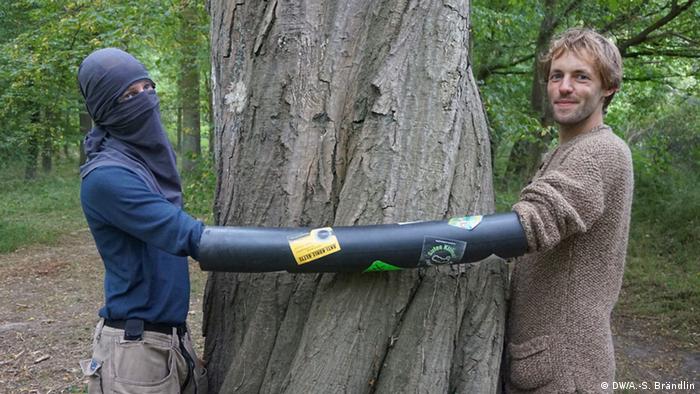 What do the activists have to say about the violent criminals accusation? 25-year-old Tam (also a pseudonym) rejects violence, and makes a passionate plea for peaceful protest. Sit-ins and human chains are okay in his opinion, throwing stones and Molotov cocktails not so much.

The activists that have been interviewed by DW so far all seemed very peaceful. They walk around the forest barefoot, love nature, and sit around the bonfire at night playing the guitar.

But there are always new people joining their cause, some from abroad now, while others only stay for a few days, for personal or professional reasons. There is no central organization, and so no one really knows how exactly others are protesting.

"So someone could be picking up a stone at some point with others not noticing it," says Tam. "I distance myself from violence, I don't think that that's a useful strategy," he says.

"We have massive discussions about this issue at the camp all the time - but no one who throws stones will admit it at that moment," Tam continues.

Joe says the violence is usually started by RWE's security personnel, who he says has been hunting activists in the forests with dogs. 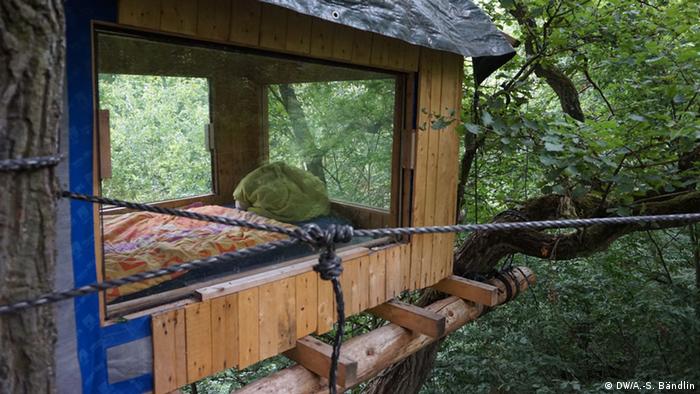 Activists live in trees to protect them from being chopped down

Tam and Joe both admit to have acted criminally insofar as that they've brought logging operations to a halt by blocking access and damaging RWE property.

"But we have to do something. We can't just watch while nature is being destroyed," says Joe. "The damage that is being caused here can never be fixed again."

"Digging for coal to a depth of 300 meters is an extremely harsh intervention in nature. It causes layers of earth to fault. That is serious business," Joe says.

Cutting down forest will almost always have  a negative environmental impact. Trees cool the air and store carbon, in that way slowing down climate change.

And Hambach isn't just any forest. It is 12,000 years old, and boasts an especially large amount of biodiversity. German environmental organization BUND says the forest is home to 142 species important for conservation, which would lose their habitat if the forest were clear-cut.

All of that wouldn't even be necessary, according to Joe. "We don't have to mine coal anymore, because we have enough energy resources from renewables these days. But the coal mining lobbies are hindering our complete energy transition," he says. 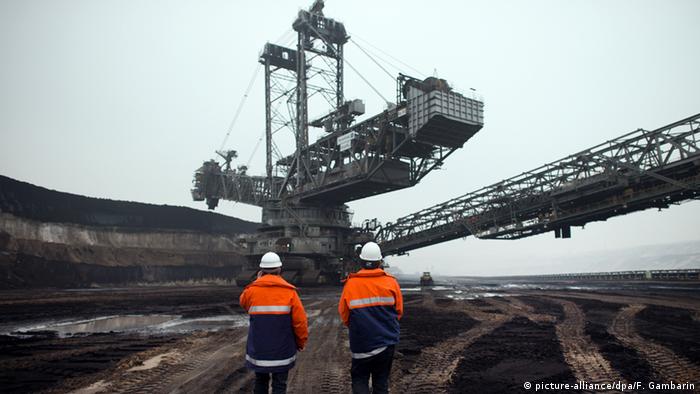 For many, coal means jobs and electricity

Is lignite as an energy source still viable?

So far, almost one-fourth of Germany's energy still comes from lignite. The Hambach open-pit brown coal mine alone provides 5 percent of Germany's electricity, and generates 2,000 jobs in the Rhine region. Around 40 million tons of lignite are extracted here every year.

"If you take the energy that is stored here, then you can compare it to the oil resources in Iraq," says Hermann Oppenberg, deputy director of the Hambach coal mine.

Officially, RWE is allowed to extract coal from Hambach Forest until 2040. But electricity production through lignite isn't really profitable any more - there is hardly any money to be made with lignite these days.

Ever since the renewable energy boom, RWE has been in crisis; its stock price have been at rock bottom for months. Shareholders have lost 80 percent of their stock value over the past decade.

In fact, renewable energy could completely replace emissions-intense lignite - which is also the German government's plan. Only a few weeks ago, it finally reached an agreement on a climate action plan. The plan stipulates that by 2050, Germany will reduce its greenhouse gas emissions by 80 to 95 percent.

In order to reach this goal, virtually all coal-fired power plants would have to be shut down. After all, one of the biggest climate challenges in Germany is power generation, which creates 40 percent of all greenhouse gas emissions.

A new commission set up by the government is supposed to plan out the reduction of coal-fired power generation after Germany's federal elections in 2017. 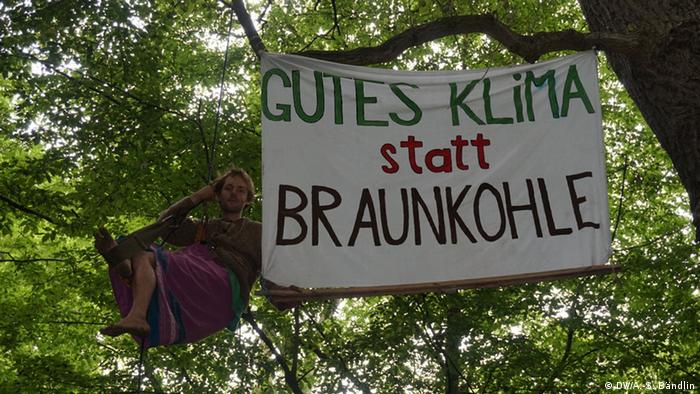 Until that happens, the activists at Hambach Forest are determined to continue their fight for survival of their beloved forest, despite setbacks.

Tam has been living in a tree house in the forest for over a year now. The first tree he lived in has already been chopped down by RWE.

"It was one of the worst feelings I've ever had in my life, especially because I couldn't be there when the tree fell," he says, followed by a long pause. Just like most of the activists here, he is aware that he won't be able to save the forest. Their protest can be stopped at any time.

"Everything we are doing here is symbolic - because we know that you cannot completely stop a large company like RWE," Joe says. "One day this forest will be completely bulldozed to the ground and our camp will be cleared, we are aware of that."

"But for us, it's about making a statement and showing the public that we are here." Forest or open-pit mining, what will remain in the end?

For Tam and Joe, this struggle is about more than just the Hambach Forest. They want to draw attention to a global problem.

"The battle we are fighting here has symbolic power for me," Tam says. "We want to set an example for the preservation of forests everywhere in the world. It's important to get active when logging is happening right at your doorstep."

And Joe won't give up that easily either. "The fight against large companies that are destroying our environment will always go on, even if we will eventually lose this battle at Hambach Forest one day."

As long as these protests remain peaceful, the police will tolerate the activists, says Schmitz from the Aachen police department. "That's part of our democracy."

"But it is unacceptable when people get hurt."

A court case brought by a Peruvian farmer against energy firm RWE started today in Germany. Melting glaciers are threatening his home and city. The causes are climate change and RWE's huge carbon emissions, he alleges. (24.11.2016)

Ethiopia's forests are almost gone, causing erosion and problems for farmers. One man is on a mission to reforest the country and has planted 4.5 million trees so far. (11.11.2016)